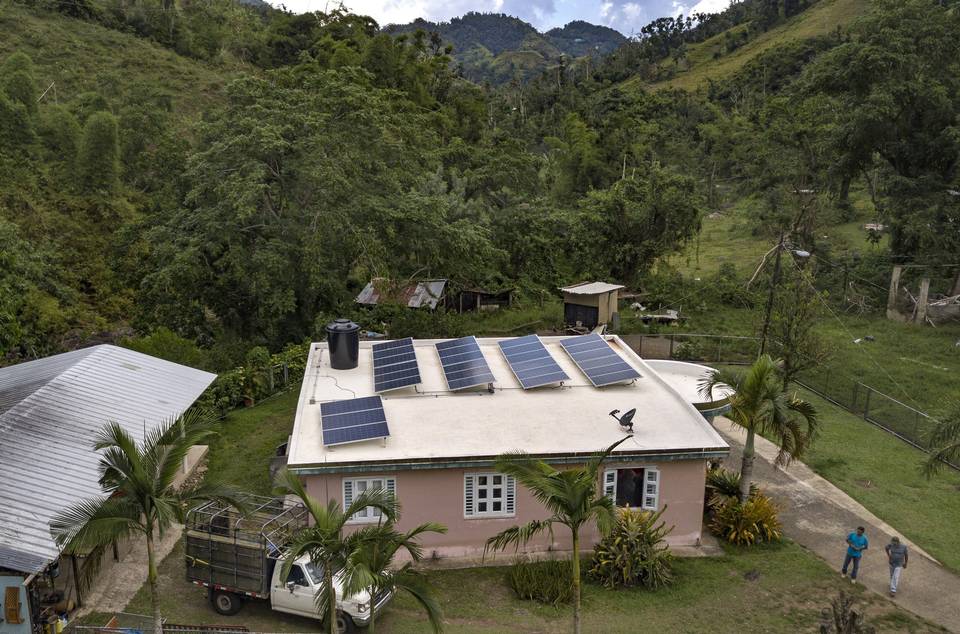 This mountain hamlet has bid goodbye to power outages on an island that is too accustomed to them. Even when Puerto Rico’s decrepit electric utility suffers a blackout, refrigerators here still whir, air conditions pump out refreshing cold air and televisions stay on.

Toro Negro has created its own little power grid. Twenty-eight homes in this middle-class community get their electricity from rooftop solar panels and energy stored in large battery packs.

“When they built this, I couldn’t hold back the tears,” said Nancy Pagan Rivera, who recounted the 8 1/2 month blackout her family endured after Hurricane Maria rumbled across the island a year ago.

Toro Negro may be a harbinger of change in Puerto Rico. The storm, and the 11 months it took to get all the lights back on in Puerto Rico, caused some to take a new look at solar energy. And it hasn’t been out of any new desire to embrace environmentalism. It’s because solar systems with battery packs provide them with greater stability than PREPA, the island’s rickety public utility, can offer.

Before Hurricane Maria hit on Sept. 20, 2017, Puerto Rico drew only 2.4 percent of its electricity from renewable energy, mostly from five solar farms and two wind farms, one of which saw its 13 windmills shredded by the hurricane’s winds.

The chief executive of PREPA, José F. Ortiz, told McClatchy that he could ramp up renewable production to 500 megawatts – or 18 percent of the island’s generating capacity — within two years. He hopes to see it climb to 40 percent, but he said achieving that goal depends on funding from Washington.

“If the federal government wants to leave a legacy in Puerto Rico, that’s the one,” Ortiz said.

Even without federal funding, Puerto Rico has become a vibrant laboratory for the installation of independent power systems. After Maria hit, clamor for electricity – of any kind – skyrocketed. Panicked islanders snapped up portable generators. Then a solar rush began. Gov. Ricardo Rosselló changed regulations to permit installation of closed-loop solar energy systems with battery packs that are known as microgrids or nanogrids.

The closed systems allow owners to draw on electricity from rooftop solar panels during the day, when battery packs are also charging, then use battery power at night. Owners sometimes are also connected to the utility grid, but pay only $3 a month if they draw no power.

“We probably sold 20,000 batteries in the past year,” said Maximo Torres, president and founder of Maximo Solar Industries.

Such closed systems are not common in the U.S. states, largely bought and installed for affluent people with strong views on the use of renewable energy.

“We probably won’t even hit the number of 6,000 this year in the entire market of residential installs on the mainland,” said Blake Richetta, senior vice president in charge of U.S. operations for sonnen Inc., a German company that has a third of the market in home-energy storage systems.

“When you look at the relative size of Puerto Rico, it’s definitely the biggest single market, truth be told, in the sovereign United States,” he said. “It is a market that actually ranks up there with some European markets.”

Normally, such simple systems of photovoltaic panels, inverters and batteries would cost anywhere up to $25,000, depending on capacity.

Elon Musk, founder of Tesla, the electric car and battery storage company, held phone sessions with Gov. Rosselló and tweeted about the battery packs he was sending to the island. In early June, Musk tweeted that his Palo Alto, California, company had “about 11,000 projects under way in Puerto Rico.” A Tesla spokesman said the company’s focus is no longer on disaster relief, and did not offer details on the company’s actions.

Puerto Ricans who have installed microgrids fall into two camps: poor communities or public service entities who received donations of solar microgrid systems, and those with enough money to buy their own solar panels, inverters and battery packs.

Dozens of nonprofit groups, many of them arising in the storm’s aftermath, are building microgrids for fire stations, community centers, schools and hospitals, and the projects are gaining publicity, adding to their momentum. One of those groups is Resilient Power Puerto Rico, which says its closed-loop systems installed at some 25 community centers will keep producing electricity through future disasters.

“This is resilience with a capital R,” said Jonathan Marvel, a New York-based architect who is a co-founder of the group.

Torres is a driving force behind another nonprofit, Somos Solar, that allied with another island foundation to pay the $330,000 cost of installing the microgrid in the 28 homes in Toro Negro, a hamlet of sturdy homes, each with a vehicle in the driveway, in the center of the island.

“It’s tremendous,” said Luis Gerardo Rivera, as he left a training session with a solar technician. He heard how he should switch over to utility power if engaged in an activity that draws a lot of electricity, such as welding. Otherwise, abundant sunshine will power his family’s needs. Rivera beamed. “We’re just using nature.”

The microgrid went into effect in June in the homes, set in a steep valley on either side of a small river. Residents are accustomed to scurrying to higher ground when rains come and the river floods. Before Maria, blackouts were common, nearly monthly, and utility linesmen could take days to fix downed lines or other problems.

The microgrid requires some coordination to operate.

“We’re going to create a corporation, with bylaws and directors,” said Tito Figueroa, a 65-year-old former school teacher who is the local organizer. “It will have one employee.”

Residents will pay a monthly fee, perhaps 40 percent of what their power bills once were, and the money will pay for ongoing maintenance, the employee’s salary and other expenses.

Elsewhere on the island, more affluent Puerto Ricans have paid out of pocket for nanogrids, which typically provide power to a single home or building. Engineer Israel Melendez Jr., who lives in Manatí along the northern coast, said the post-hurricane blackout threatened his small business.

“We needed reliable power to get back to work and be able to service our stateside customers. Without power, I wasn’t able to leave home in the dark,” said Melendez, whose business offers quality control services to pharmaceutical labs.

He convinced his wife that they should spend savings earmarked for a house renovation on a microgrid instead. She agreed. Now, a robust solar array sits on the roof of their home and three Tesla Powerwall 2s store all unused energy for when the sun goes down.

What makes the experiment with microgrids and distributed power generation in Puerto Rico of significance beyond the Caribbean is that it may soon spill past the affluent and the nonprofit donor groups installing the systems to vulnerable communities.

The utility hopes to spend some of the $2 billion that Congress this year allotted for Puerto Rico disaster recovery through the Department of Housing and Urban Development to provide solar systems for tens of thousands of families, he said. Under the plan, the utility would pay for, install and operate the systems in exchange for use of rooftops and reduced electricity rates for host families.

Previous studies have already identified 20,000 houses in the Greater San Juan area suitable for the program, Ortiz said. He noted that the utility spends about $2 billion a year on imported fuel to power its six fossil fuel generation plants

Some people involved in the renewable energy industry said any such change would be a U-turn for the utility, which for decades resisted competition in generating electricity.

But PREPA is bruised, bankrupt and facing public wrath over perceptions that it charges consumers too much for electricity. Residential rates on the island are about 40 percent higher than on the mainland United States, the U.S. Energy Information Administration says.

“People on a regular basis have to contest their bills with PREPA,” said Marvel, the nonprofit activist.

If microgrids continue to expand,they would form independent, decarbonized energy islands, potentially able to work together as a hive or swarm, said Richetta.

“Not only would you be able to create a secure energy future for the people of Puerto Rico but you would also have this scientific proof that we would learn a lot from,” he said. “This would be the first time it’s actually done instead of just a bunch of talk.”