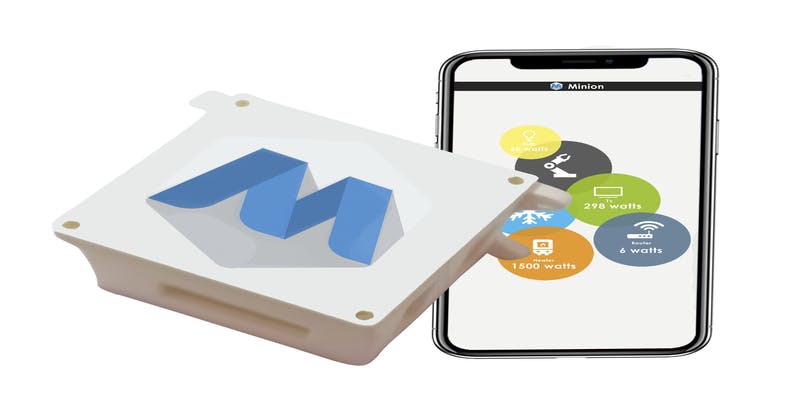 Using this as a project idea in his final year of college, Gokul Shrinivas built a product called Minion, a smart energy device, in 2015.The idea was to help reduce electricity costs in buildings by installing the monitoring device that helps analyse energy consumption patterns.

Once installed, the Minion trains itself and learns about the consumption pattern of each device. The device can be connected to the internet, which then notifies the user about the energy consumption patterns and breakdown of devices through WhatsApp and e-mails. It can be connected to major connectivity solutions (WiFi, Lora Wan, 2G/3G/4G, ZigBee); an OLED display can also be stacked on it.

The platform senses electricity consumption (for offices, shopping malls, hospital, and even individual houses) and streams it to the server through internet. B2B in nature, Minions target individual houses and the device is installed after the building’s construction is over.

Minions can also predict future electricity consumption rate at appliance level and alert the user if a device is going to break down, well in advance. It also performs asset efficiency analysis, root cause analysis, warranty lifetime analysis, and carbon emission analysis.

The company says Minions disaggregate the whole building’s electricity consumption (with an accuracy rate of 98.24 percent) into the number of appliances and devices present in the building. Apart from its efficient usage, it can also be installed in just three steps and no plug-ins are required. All one has to do is log in with a browser and start tracking electricity consumption.

The founders say a single Minion has the capacity to record energy consumption of up to 168 devices.

Building the team and challenges

Gokul’s project took shape as a product at IDC Labs at IIT Bombay. His former batch mate and Co-founder, Ram, 23, joined the company as a front-end developer.

“Since I passed out only in 2016, I didn’t have many connections. It was very challenging to sell and market the product as well as to raise funds,” Gokul says.

The founders say they initially struggled with high manufacturing costs and a high budget to invest in a cloud platform.Gokul had to take a loan of Rs 5 lakh through an MSME to start the project. “We opted for digital marketing since traditional marketing requires strategies and good connections, which we didn’t have,” he says.

They are now a team of six “Minions”.

The sector and competition

Many companies have been operating in this space since 2014. A study by research firm IDC estimates that there will be over 28 billion objects with data-exchange capabilities by 2020.

Other players in the space include Blume Ventures-backed Zenatix Solutions, which is an IoT-driven energy data analytics company. It is a cloud-based energy analytics product that collects data from several electrical products and breaks them into actionable insights. The company claims it helps reduce electricity spends by nearly 10 percent. Delhi-based QuasroEnviro also operates in the same space.

Since its inception, MinionLabs claims to have sold 232 devices to 120 customers at an average price of Rs 10,000. The company maintains 100 pieces in stock, and orders beyond that take a turnaround time of 15-30 working days.

Minions can also be used to predict future energy consumption, something no other competitor can do.

As of now, MinionLabs’ target segments are commercial buildings, mostly hotels, retailers, and hospitals. Some of its prominent clients include Fortis Hospital and Gopalan Signature mall in Bengaluru.

Bengaluru has been the pilot for MinionLabs and the company plans to expand to other metros once it reaches its targets. It also plans to launch a mobile phone app in the next six months.