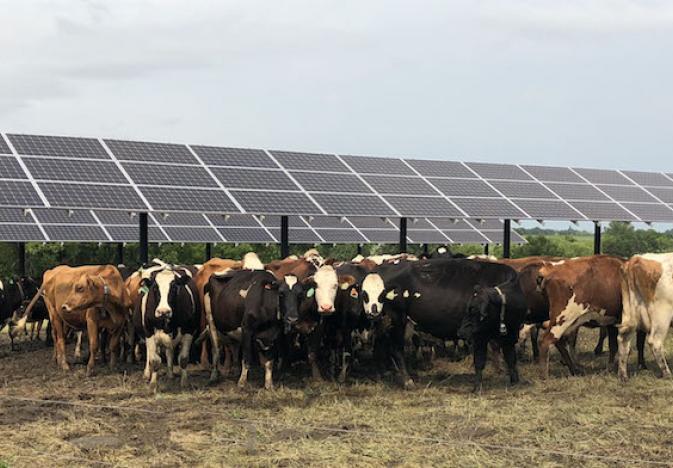 Researchers at the University of Minnesota’s West Central Research and Outreach Center at Morris, have installed solar panels that generate power that also provide cooling shade for cows and heifers.

Power generation is the solar panels’ main purpose, of course. But positioned 8’ to 10’ above the ground surface, the panels can provide shade for 30 to 40 cows under one structure and a like number of heifers under a second system, says Brad Heins, an organic dairy production specialist at the Morris Center.

The first 50 kW system was erected in 2016, and is sited near the Center’s heifer facility. It can provide shade for heifers on a more on-going basis as the heifers move to and from pastures.

The second, 30 kW system was erected this year, provides shade in a field that connects the Center’s rotational grazing paddocks. As such, it can provide shade for up to two weeks out of each month as cows are rotationally grazed through the series of paddocks. A water fountain is also positioned nearby to entice cows to use the area.

“We’ll monitor the behavior of the cows under the shade, their eating and lying behavior and also their milk production compared to when they don’t have access to the shaded areas,” says Heins. The Center’s other paddocks have some trees for shade along fence lines, but no other shade structures. It will be interesting to see if the shade provides enough cooling to support more milk production, says Heins.

The dairy is home to 300 organic and conventional cows which are milked in a double-9 swing-over parlor. Because the swing-over parlor only has 9 milking units, milking can take up to six hours per shift for a total milking time of up to 12 hours per day. Energy is also needed for hot water for cleaning, for lights, for milk cooling and for the vacuum pump. One of the biggest users of electricity is a clothes dryer, which is used daily to dry towels used in udder prep.

The Center is also working to perfect a unique heat reclamation system that removes the heat from milk and stores it for milking system cleaning. Reclaimed heat is transferred to water which is retained in a super insulated thermal storage tank. The stored heat is then used to pre-heat water to clean the system immediately after each milking.

With that system and the power generated from solar panels, the dairy is 80% of the way toward its goal of zero net energy. Once the wind turbines become operational, the goal of not needing any energy from the outside electrical grid should be reached, says Heins.

“We have a 151 kW of green power on the whole research farm, and we don’t sell any of it back to the grid. We use it all here,” he says.

Without incentives, the payback on some of the systems can stretch out to 20 years. With federal tax incentives of 30%, the paybacks will range from 10 to 15 years, he says. But the Research Center’s main goal is to research these systems to see if they can consistently meet the energy needs of a working dairy farm.

In northern latitudes, solar power generation in winter can be less than half that generated in June and July. That’s where the wind turbine can pick up the slack. Wind turbines, on the other hand, can produce power continuously, even at night when it might not be needed and too expense to store. So farms, if they wish to be entirely off the power grid, might need both systems to generate electricity when they actually need it.