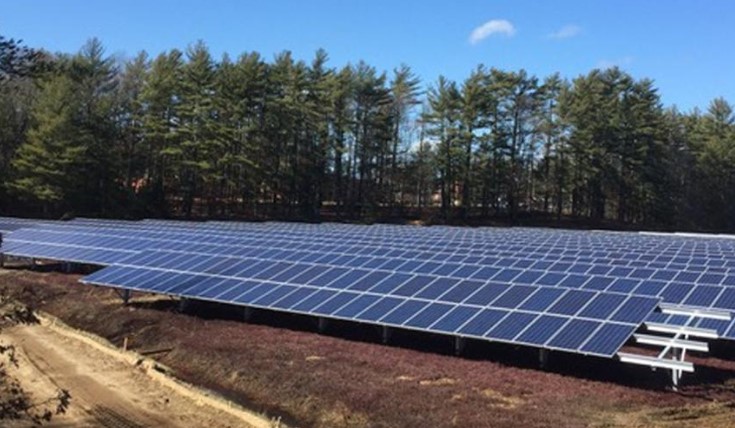 Things are pretty cloudy right now for the cranberry industry, and growers in Dartmouth, Carver and other towns are turning to solar panels to brighten up their profits.

“Cranberries aren’t paying anymore,” said Louis Paduch, 84, a grower in Carver who has watched the market change for a generation and seen his son, Mike, take the plunge to cover a bog with solar.

The price of cranberries fluctuates, just like the price of other agricultural products. But Paduch fears today’s slump is a long-term thing, fed by oversupply from big bogs outside Massachusetts.

He said a number of local farmers are simply letting their bogs go. The weeds are creeping in.

Dartmouth has about 115 acres of bogs. It also has a bylaw that could get in the way: a prohibition on large-scale solar projects in residential areas.

The town is considering amending the bylaw because solar panels have been proposed for about 30 acres of bog owned by Fred Bottomley at 293 Flag Swamp Rd. Solar development company NextSun Energy is working with Bottomley on a proposal that would fit within Massachusetts’ new Solar Massachusetts Renewable Target (aka SMART) Program. The program provides incentives for sustainable solar energy production, including on agricultural land.

One difference between the Dartmouth proposal and Mike Paduch’s solar bog, which is on Main Street in Carver, is Paduch owns the land. In Dartmouth, NextSun intends to buy it.

Company president and founder Jacob Laskin said NextSun has a relationship with a cranberry management company that would probably care for the bog. Dartmouth’s would be his first solar project on a bog.

Bottomley could not be reached for comment, but another Dartmouth bog owner, 74-year-old Philip DeMoranville of Lakeville, said the public needs to understand that the Massachusetts cranberry industry is in trouble, and solar can help.

“The immediate beneficiary would be the farmer, who hasn’t been able to make any money in years,” he said.

His situation is different from that of most growers because he grows organic cranberries. But he said he’s still making half of what he should, while others are making a third of what they should.

Adam Schumaker, vice president of development for NextSun, said towns could get significant tax revenue from solar projects. He calculated that if Dartmouth had solar on all 115 acres of bogs in the town, for a total of 12 megawatts of solar capacity, the projects would generate more than $3 million in tax revenue over the first 20 years.

Solar bogs must be harvested dry, using a walk-behind machine, rather than by floating the berries on water. Not everyone wants to do that, Schumaker said.

Ninety-five percent of Massachusetts cranberries are harvested wet, according to the Cape Cod Cranberry Growers’ Association.

Brian Wick, executive director of the association, said he senses some optimism that the market will improve with the development of new cranberry products and opportunities in the export market. Even the domestic market has not been fully tapped, he said.

Wick said Quebec has probably doubled its cranberry production in the last 20 years, using efficient, rectangular bogs. But to blame the drop in cranberry prices on large-scale bogs alone would be simplifying the issue, he said.

Still, Wick said the footprint of Massachusetts bogs is not likely to grow much. Land prices are higher, and the land is more densely populated. The average Massachusetts grower has 15 to 20 acres of bogs.

“We have to recognize who we are as a region,” he said.

Being in Massachusetts can have some advantages, he said, like having a large consumer population nearby to which cranberry products can be shipped inexpensively.

In the Ocean Spray cooperative, which handles three-quarters of the Massachusetts crop, some growers are looking at alternative uses of their land or new uses that are compatible with cranberry growing, according to Kellyanne Dignan, director of global corporate affairs for Ocean Spray.

The cooperative, which includes just over 200 family farms, has explored ways to ensure cranberries remain feasible here, she said. One grower offsets 100 percent of his energy usage with solar, and another has four wind turbines.

Mike Paduch said most growers view solar as a way to stay in the cranberry industry, not get out. His solar bog produces fewer berries where the solar panels shade the vines, so he uses that bog to cultivate cranberry plants to sell to other farmers.

“There is a certain level where I’d rather be growing cranberries than growing solar,” he said. But if his profits continued in the direction they were headed, he said, “growing neither would have been the only option.”