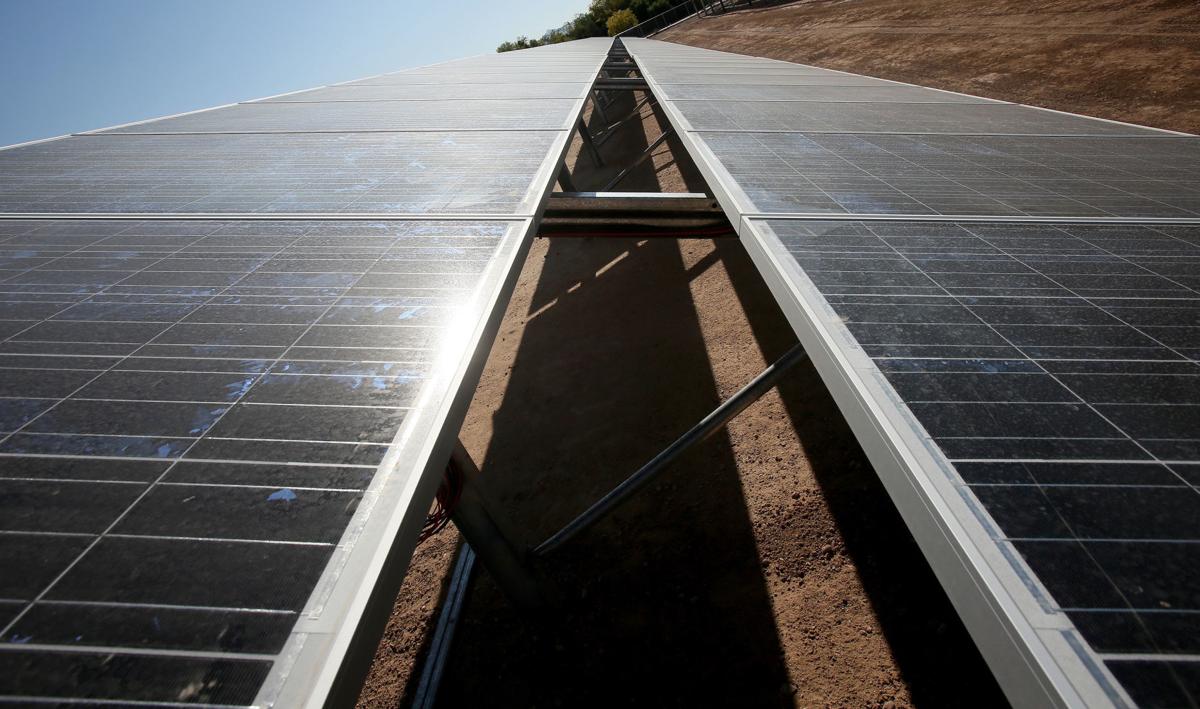 Tucson Electric Power Co. hasn’t actively campaigned against a ballot proposition that would require state-regulated utilities to dramatically increase their use of renewable energy sources like solar and wind.

UNS Energy Inc., parent of TEP and sister rural utility UNS Electric, has formed and plans to fund two political action committees to oppose Proposition 127, Clean Energy for a Healthy Arizona. If approved, it would mandate that 50 percent of electricity generated in Arizona come from renewable sources by 2030.

UNS says the ballot measure, pushed by a group formed by California billionaire activist Tom Steyer, would dramatically increase costs for consumers and prompt the premature closure of fossil-fuel plants, including the TEP-owned Springerville Generating Station.

Arizona Public Service Co. has spent millions of dollars bankrolling a group opposing the ballot measure, which it also says will raise bills and potentially cause the closure of the Palo Verde Nuclear Generating Station. UNS has not contributed to that effort, though TEP’s CEO filed formal comments against the initiative for the state general-election publicity pamphlet.

The utility has been studying the impact of Prop. 127, while a lawsuit filed by APS aimed at stopping the proposition made its way through the courts, UNS officials say.

TEP estimates the new mandates in Prop. 127 would increase average residential electric bills by more than $500 per year, while the average business bill would jump $3,400 annually.

APS’ own studies show that the measure would increase costs and prompt the closure of the Palo Verde Nuclear Generating station, though other studies dispute that finding.

UNS feels it has a responsibility to educate its ratepayers about the impact if the ballot measure passes, its chief executive said.

“We’re always working with our customers to try and find the right balance between affordable and reliable energy,” said David Hutchens, president and CEO of UNS Energy and TEP. “We want to make sure our customers understand the impact of things they vote for, then if they still want it, we’ll do it.”

The company does not directly contribute to political campaigns — though like many companies it has a political action committee funded by employees — and has no plans to contribute to two APS-backed groups opposing Prop. 127, Hutchens said.

But with APS’ legal challenges turned away and Prop. 127 headed for the November ballot, UNS is mounting its own information campaign against the measure, partnering with other local business groups that oppose the plan.

“We’ve not engaged politically, beyond answering people’s questions, but we feel it’s our responsibility to share information about these impacts with customers,” said Joe Salkowksi, director of corporate communications and community relations for TEP and UNS.

“We see higher bills, we see the possibility of early retirement of one or two units at our Springerville Generating Station, and we have concerns about our inability to modify these rules if they become ensconced in the constitution.”

UNS will use corporate money that would otherwise go to shareholders to fund the efforts against Proposition 127. No ratepayer funding will be used, Salkowski said.

Though an exact budget for the committee work has not been set, it will “certainly not be seven figures,” he added.

Southern Arizonans for Responsible Energy was registered as a political action committee with the Arizona Secretary of State on Aug. 30. The Mohave County group, intended to deliver UNS’ message in the northwestern Arizona county served by TEP sister, Unisource Energy Services, has not been formally registered.

The Southern Arizona group’s chairman is Morgan Abraham, managing partner in AAG Realty and treasurer of the Pima County Democratic Party. Its treasurer is Robert Medler, vice president of government affairs for the Tucson Metro Chamber of Commerce.

Funded by UNS, the group will have members including local chambers of commerce and other stakeholders concerned about the potential impact of the clean-energy measure, Salkowski said.

UNS has hired Tucson-based Strongpoint Marketing to handle the campaign. The firm’s staff includes chief strategy officer Steve Lynn, who retired as a TEP executive in 2011 and has long been involved in civic affairs.

Abraham, who specializes in developing affordable housing, said he’s concerned about the potential for higher electric rates should the ballot proposition pass and their impact on lower-income ratepayers.

“I am concerned about some of the unintended consequences,” Abraham said. “You can call utility increases a form of regressive taxation — it disproportionately impacts low-income populations more than the average person.”

Salkowski said the UNS-funded effort won’t be as big or as contentious as the campaign being waged by the APS-backed groups and will be more educational in tone.

“It’s not going to be nearly the campaign that is taking place in Phoenix,” he said. “We’re really trying to get the word out in our community, in a voice that we are comfortable with. … We feel an obligation to share information about the impact, and we’re doing our very best to be transparent and appropriate in the way we do it.”

But the company says customer-owned rooftop solar installations shift costs to non-solar customers and are too expensive compared with utility-scale renewables.

Proposition 127 would require utilities to get 10 percent of their renewable power from customer-owned solar arrays “at a much higher cost than larger, community-scale solar or wind systems,” Hutchens wrote in his argument in the state general election publicity pamphlet.

But the Clean Energy for a Healthy Arizona cites studies by the National Resources Defense Council showing falling costs for solar and wind power would save ratepayers more than $4 billion through 2040, while Palo Verde would remain competitive enough to stay in operation.

Rich, who said his clients haven’t taken a position on Prop. 127, cited a plan by Xcel Energy Colorado to close two coal-fired power plants and move to 55 percent renewable energy by 2026, estimating more than $200 million in savings to customers.

“They are predicting lower rates for all of their customers,” Rich said.

BUSINESS GROUPS
LINE UP IN OPPOSITION

Those filing arguments in favor of Prop. 127 include environmental groups such as the Grand Canyon Chapter of The Sierra Club and the National Resources Defense Council, as well as public-health groups such as the Arizona Asthma Coalition, the Arizona Public Health Association and Physicians for Social Responsibility.

The general election looms as the Corporation Commission continues to consider new rates for future rooftop solar customers of TEP and UNS, which have proposed higher fees and lower credits for excess solar production in line with a commission policy decision to end net metering. The changes would not apply to customers who currently have solar.

That proceeding has been delayed numerous times as regulators wrestled with the rate issue, but it is now on the agenda for the Corporation Commission’s Sept. 11 open meeting.

Meanwhile, the Corporation Commission is considering its own plan to boost renewable power production to at least 80 percent of the state’s electricity generating portfolio by 2050, with an ultimate goal of 100 percent.

TEP says that plan would raise costs by an estimated $800 million through 2030 and also eventually prompt the closure of the Springerville power plant.