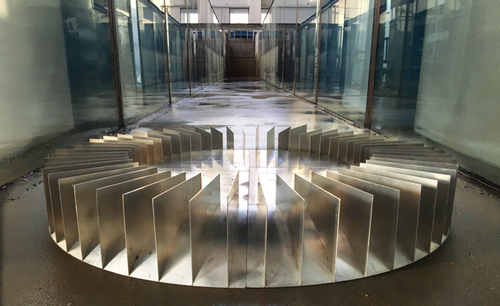 Ocean waves contain lots of energy that could be harvested, especially if methods for energy extraction could be improved. Now researchers have demonstrated a new type of structure that concentrates the energy of passing waves into a smaller area, thereby making energy harvesting easier. With further development, the technique could soon find practical deployment in offshore wave energy projects.

Engineers know of several ways to focus the energy of water waves. An array of underwater cylinders can focus waves much like a lens does for light [1]. Wave energy can also be concentrated simply by directing waves down a gradually narrowing channel formed between two walls. But these methods also reflect much of the wave energy by producing waves that move backwards, against incoming waves. In contrast, researchers led by Huanyang Chen of Xiamen University and Zhenyu Wang of Zhejiang University, China, have exploited ideas from optical engineering to devise a structure that achieves wave concentration with little reflection.

Two years ago, Chen and other researchers showed how microwaves could be concentrated into a small region using a cylindrical device containing a set of thin metal sheets, all extending radially outward from the cylinder axis [2]. For microwaves incident perpendicular to the axis, the channels between the sheets acted as waveguides to direct waves inward, boosting the central wave amplitude. Inspired by the similarity of the wave equations for water and light, Chen and colleagues wondered if a similar structure might work for water waves.

They imagined a fixed structure mostly submerged in water. It would have a central open region surrounded by 50 vertical walls, taller than the waves, extending radially outward to a certain distance. As with the microwave device, the walls would allow water waves incident upon the structure to travel only along the radial direction, thereby focusing energy toward the central open zone.

The wavelength of shallow water waves depends on the depth. Chen and colleagues found through calculations that if the depth decreases in a precise way between the outer edge and the central zone, wave reflections are practically eliminated for particular frequencies. For waves of these special frequencies, an integer number of half-wavelengths fits perfectly within the channels, along the radial direction. This arrangement leads to a wave interference effect that suppresses reflections.

To test their design, the team first built a small structure using a 3D printer, with a central zone having a radius of 35 mm and walls extending out to 70 mm. The water depth was 8 mm outside the structure, decreasing to 6 mm in the interior. The researchers sent waves at optimal frequencies (either 4.95 Hz or 7.05 Hz) toward the structure and found, as expected, that it focused the waves, doubling their amplitude by the time they reached the center. The wave pattern outside the structure was unchanged, indicating the absence of reflected waves.

The team also tested a larger structure having an outer radius of 43 cm, with water depth decreasing from 10 cm down to 3 cm in the central region. For this structure, the focusing was even more effective, with amplitudes tripling at the special frequencies. Testing the effect over a range of frequencies, experiments again showed that the response closely fit the researchers’ expectations.

“They have demonstrated the predicted ‘invisibility’ [lack of reflections] and amplitude enhancement at a scale that starts to look interesting for wider research into harnessing water waves,” says Martin McCall, a theorist who studies optics at Imperial College London. “This work is a potentially significant advance,” he says, “and might well be useful in other areas, such as acoustics.”

Chen says that he and his colleagues hope to begin work soon on scaling these experiments up to the size needed for ocean energy harvesting. “This work is a big step to a real application near the seashore, and we hope we can achieve a much bigger one in Xiamen in the near future,” he says.