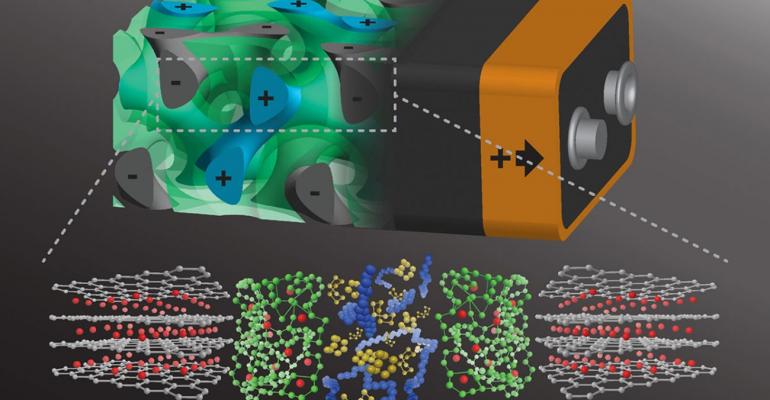 To overcome storage capacity and recharge-time limitations of conventional batteries, a Cornell team developed a self-assembling battery with twisted “ribbons.”

Users of rechargeable batteries have two ongoing complaints: They don’t provide enough capacity (run time), and they take too long to recharge. A research team at Cornell University hopes to fix that with an approach which allows the battery to self-assemble with a unique, higher-capacity internal structure than standard batteries, and enables far-faster recharge.

Their paper, ominously entitled “Block Copolymer Derived 3-D Interpenetrating Multifunctional Gyroidal Nanohybrid for Electrical Energy Storage” and supplemental material, was published in Energy and Environmental Science, a publication of the Royal Society of Chemistry. Together they describe the principles, design, production, and performance of their approach.

In contrast to having the battery’s anode and cathode on either side of a nonconducting separator, this method intertwines the battery’s internal components in a self-assembling, 3D “gyroidal” structure. The structure contains thousands of nanoscale pores filled with the components necessary for energy storage and delivery.

As pointed out by Prof. Ulrich Wiesner in the Department of Materials Science and Engineering, “This three-dimensional architecture basically eliminates all losses from dead volume in your device.” He added that due to the dimensions of the battery’s elements being shrunk down to the nanoscale, “you can access the energy in much shorter times than what’s usually done with conventional battery architectures.”

How is this done? The architecture for this concept is based on “block copolymer self-assembly” (Fig. 1), a procedure that they have used for other devices (including a gynocidal solar cell and a gyroidal superconductor). The gyroidal (highly twisted) thin films of carbon that form the battery’s anode contain thousands of pores about 40 nm wide. These pores were coated with an electrically insulating but ion-conducting separator (10 nm thick) using a process called electropolymerization, which inherently produces a pinhole-free separation layer.

That’s an important benefit, since any holes in the separator can lead to catastrophic battery failure, including fires. They next add the cathode material (here, sulfur), but don’t completely fill the remainder of the pores. Sulfur accepts electrons but doesn’t conduct electricity, so the final step is to backfill with an electronically conducting polymer known as PEDOT (Fig. 2).

Prof. Wiesner acknowledges that there are still challenges, despite the impressive performance (Fig. 3). The battery volume changes during discharging and charging and this degrades the PEDOT charge collector, which doesn’t undergo the expansion/contraction that does happen with sulfur. Wiesner noted that “when the sulfur expands, you have these little bits of polymer that get ripped apart, and then it doesn’t reconnect when it shrinks again. This means there are pieces of the 3D battery that you then cannot access.”

This work was supported as part of the Energy Materials Center at Cornell funded by the U.S. Department of Energy as well as in part by the National Science Foundation.

Researchers at the Cambridge University (U.K.) Department of Chemistry are also looking to decrease recharge time, in this case by using complex crystalline structure of niobium tungsten oxides such as Nb16W5O55. While their approach (funded in part by the European Union, the Science and Technology Facilities Council, and the Engineering and Physical Sciences Research Council) published in Nature, “Niobium tungsten oxides for high-rate lithium-ion energy storage” (along with posted Supplementary Information) doesn’t enhance charge capacity, it does speed recharging time.

Dr Kent Griffith, a postdoctoral researcher on the team, speculated that complex atomic arrangements and structural complexity along with the mixed-metal composition are the reasons the materials exhibit unique charge-transport properties (Fig. 4). “Many battery materials are based on the same two or three crystal structures, but these niobium tungsten oxides are fundamentally different,” he said.

The oxides are held open by “pillars” of oxygen, which enables lithium ions to move through them in three dimensions, and have a rigid, open structure that doesn’t trap the inserted lithium, as well as contain larger particle sizes than many other electrode materials. Griffith explained that “the oxygen pillars, or shear planes, make these materials more rigid than other battery compounds, plus their open structures means that more lithium ions can move through them, and far more quickly.”

He added that “these oxides are so easy to make, and don’t require additional chemicals or solvents. That’s in contrast to nanoparticle-based materials where “a lot of the nanoparticle structures take multiple steps to synthesize, and you only end up with a tiny amount of material, so scalability is a real issue.”

Testing batteries to see what’s going on inside them is another challenge, as they are very much constantly changing, chemically based “black box” components. Using pulsed-field-gradient (PFG) nuclear-magnetic-resonance (NMR) spectroscopy (better known as magnetic resonance imaging or MRI), the researchers measured the movement of lithium ions through the oxides and concluded that they moved at rates several orders of magnitude higher than typical electrode materials.

There’s another potential advantage to the new materials. The negative electrodes in most lithium-ion batteries are made of graphite, which has a high energy density (that’s good, of course). However, at higher charging rates, there’s an often-occurring phenomena where these electrodes can grow thin lithium metal fibers (dendrites), which in turn can create short circuits and cause batteries with high energy density to catch fire and possibly explode.

Neither report mentions the other issue that looms over fast-charging situations: How do you get enough energy into the battery at a fast-enough rate (power is the rate of energy delivery) to actually achieve the fast-charge possibility, since connectors, cabling, and self-heating can be serious practical issues.