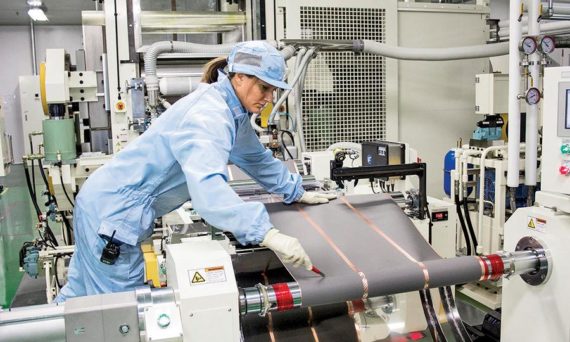 A handful of EV battery companies dominate global EV battery production. One of those companies is LG Chem, which supplies batteries to nearly every automaker under the sun.

Recent news indicates that LG Chem has increased its 2020 production target from 70 GWh to 90 GWh, approximately 29%.

“If producing at capacity, LG Chem’s LIB output and raw material consumption would be greater than the entire LIB market in 2015,” Roskill writes.

“Assuming 100% of output was to be NMC532, 90GWh would require around 100kt of cathode, containing 40kt nickel, 22kt cobalt, 16kt manganese and 50kt lithium (carbonate equivalent), and 90kt of anode materials which could be 100% graphite.” Note that there’s been a general shift toward NMC811 in the EV battery industry.

Here’s more detail about LG Chem developments and its own suppliers: “It is no surprise then that LG Chem has been getting its raw material supply chain in order to meet future LIB capability. In April, LG Chem signed a joint venture with Zhejiang Huayou Cobalt to establish precursor and cathode material facilities with capacity of 40,000tpy, with expansion to 100,000tpy envisioned. Huayou is a cobalt refiner with cobalt mining and processing assets in the DRC. In July, LG Chem signed a 5-year, 7,000tpy lithium hydroxide off-take with Nemaska Lithium, and last week announced a 3-year, 16,000tpy lithium hydroxide supply agreement with Ganfeng Lithium starting 2019. LG Chem has also invested in Korean anode producer GS E&C and has a 10% stake in Korea Zinc’s nickel sulphate subsidiary Chemco. With LG Investment, LG Chem is an investor in Cobalt Blue’s Thackaringa primary cobalt project in Australia, and the company had previously been linked with Pilbara Minerals for a downstream conversion facility.”

Overall, the significant increase in 2020 production capacity reflects the growing realization that electric cars can be competitive today, which has led to more serious models and probably battery procurement orders from large automakers. There are also rising electric car startups that will need to get their batteries from somewhere once they are ready for production, and LG Chem seems like a pretty solid “somewhere.”