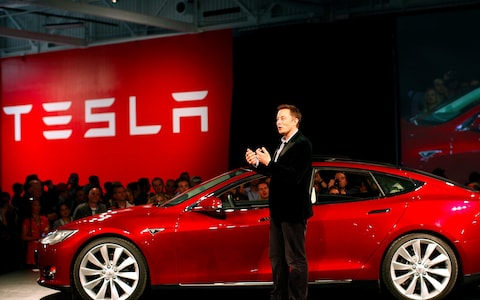 Tesla stock fell Friday as the troubled electric-car maker contended with a couple of executive departures and dealt with a bizarre incident involving Chief Executive Elon Musk smoking marijuana and drinking whiskey during a news interview.

Musk, late Thursday, sipped whiskey and smoked marijuana during an interview on “The Joe Rogan Experience” video podcast. He took one drag from what Rogan described as a joint containing tobacco mixed with marijuana. Marijuana is legal in California, where Tesla is based.

Further, Tesla’s Chief Accounting Officer Dave Morton, said he is leaving the company after one month on the job. The departure is effective immediately.

Another in a string of executive departures came Friday as Bloomberg reported the company’s human resources chief won’t return from a leave at the company. Tesla Chief People Officer Gabrielle Toledano started her leave last month.

The pot-smoking incident comes amid growing doubts about Musk’s judgment. Musk recently made a failed bid to take Tesla (TSLA) private. He also claims a Thai cave rescuer who refused Musk’s help in aiding stranded teenagers is a pedophile.

Morton and Toledano are part of a long string of key executive departures at the electric-car maker. Tesla announced the departure of Morton in a filing with the Securities and Exchange Commission.

“The level of public attention placed on the company, as well as the pace within the company, have exceeded my expectations,” Morton said in a written statement. “As a result, this caused me to reconsider my future. I want to be clear that I believe strongly in Tesla, its mission, and its future prospects, and I have no disagreements with Tesla’s leadership or its financial reporting.”

On Tuesday, Goldman Sachs analyst David Tamberrino restarted coverage on Tesla with a sell rating and price target of 210.