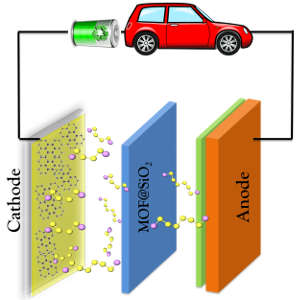 Rechargeable lithium–sulfur (Li–S) batteries hold great promise as future energy sources, particularly because sulfur is a cheap, abundant, environmentally friendly resource.
While calculations predict these batteries could have an unusually high energy and capacity, the technology is currently limited by the movement, or ‘shuttling’, of chemical compounds called polysulfides between the battery’s electrodes. Polysulfides deteriorate the lithium side of the battery and reduce its ability to hold charge.

To tackle this, Mohamed Alkordi at Zewail City of Science and Technology in Egypt and co-workers have fabricated a flexible coating for a commercially available membrane that is placed between the lithium (anode) and sulfur (cathode) components of the battery. The membrane is coated with a special microporous compound known as a metal–organic framework (MOF). The MOF acts as a molecular sponge that hinders the diffusion of the polysulfides.

In comparison to other Li–S batteries, the team found that their novel membrane significantly improved the cell’s storage ability, retaining 98.5 per cent of its capacity after 40 hours. It also had enhanced thermal stability and ionic conductivity.

“The findings of our research can potentially address key limitations currently facing Li–S battery technology,” says Alkordi. “We believe our work can provide practical solutions to realize its commercialization in the near future.”