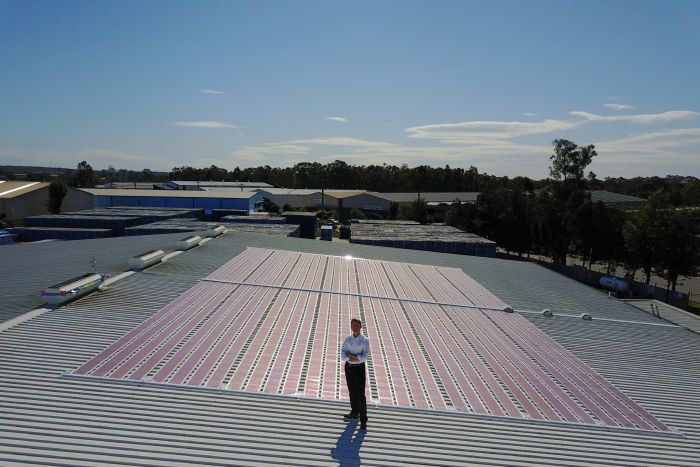 Which isn’t very impressive in its own right … except that the solar cells were printed on a reel-to-reel printer.

Advocates of the new technology say it can revolutionise the way solar panels are made and distributed in Australia and around the world.

But hype aside, printed panels are less efficient than silicon-based panels, they only last a couple of years, and making them isn’t as simple as hitting print on your home computer.

So do they deserve the hype? Could printed solar panels make renewable energy an affordable option?

How do you print a solar panel?

Printing solar cells is nothing new.

Teams around the world have been working on the technology for more than a decade, including at the CSIRO and Monash University.

However, the University of Newcastle’s latest installation, which is undergoing a six-month testing period on the CHEP company factory, puts them at the head of the game and brings them within “about two years” of launching their product onto the commercial market.

Solar cells are made from a semi-conducting material — something that can be positively or negatively “doped” to carry more or less electrons and thus, have positive or negative conductivity.

Most semi-conductors, like silicon, are brittle, so the Newcastle team led by Paul Dastoor created inks from semi-conducting, flexible polymers.

The first layer of semi-conducting ink is printed on a transparent plastic sheet, and then numerous layers are printed, one on top of the other, until the cells are about 200 microns thick. A human hair is around 50 microns.

“Then we produce a top contact layer which is done again, reel-to-reel, using a technique known as sputter coating,” Professor Dastoor said.

“It’s the same technique you use to make the metallisation on chip packets. So that makes my top electrode, and then we seal the whole lot up in a top layer of plastic.”

They printed the panels onto 10-metre rolls and, for the CHEP building, 640 metres of printed solar was rolled out and connected in series to form a 200-square-metre bank of panels.

How is this better than a regular solar panel?

So if you can’t make these on your printer at home, is this better than a regular solar panel? From one perspective — no.

Printed panels are less efficient, and at the moment, only last about two to three years, according to Professor Dastoor.

But proponents see their advantage in cost, ease of manufacture and weight.

The Newcastle solar array was installed in an afternoon, and fixed to the roof using double-sided tape.

“The best question is, what’s the cost of the energy,” Professor Dastoor said.

“Because they’re so cheap to manufacture, even though they have low efficiency and they don’t last very long … those costs still mean that it’s highly economic to go down this path of printing solar.”

The cost of a semiconductor fabrication plant, where silicon for panels is refined, runs into the billions of dollars; the set-up cost for printing panels is in the thousands.

For comparison, the combined cost of CSIRO’s printers used for their printed solar comes to less than $500,000.

The Newcastle team estimate the cost of their modules at less than $10 per square metre.

Currently the printed panels are about one fifth as efficient as silicon-based panels. If their efficiency can be doubled, the team estimate that a 150-square-metre array could cover the power needs of an average household.

They’ve doubled the efficiency of their panels in the last year, and expect to double it again in as little as the next 12 weeks.

CSIRO are already achieving those numbers, according to senior research technician for printed photovoltaics Jyothi Ramamurthy.

Ms Ramamurthy said CSIRO are aiming to integrate their technology into things like awnings, blinds, and tents.

“We’d like to harness solar from everywhere,” she said.

The initial investment in silicon-based solar panels makes them prohibitively expensive for many homeowners and most renters.

But cheaper printed panels would allow a short-term payoff that could be within reach for renters, according to Professor Dastoor.

“I see it very much working like mobile phones work,” he said.

“I think what’s more likely is we’re going to say, ‘oh yeah I’ll go with that energy plan’, and someone’s going to come and put it up and take it down and you won’t know.”

Like mobile phones, he said we can expect that each time we upgrade, the technology will have improved.

Shouldn’t we be moving away from a disposable model?

nels are to roll out commercially, recycling or reuse of the plastic components would need to be mandatory in order to avoid adding to Australia’s waste problems.

The plastic used in the production of CSIRO’s printed solar is recyclable PET — the same as is used in soft-drink bottles, according to Ms Ramamurthy.

“In theory, some of the materials printed on the PET should be recovered before disposal and more work is required in this area,” she said.

While some in Canberra have been arguing that renewables have been driving up power prices, a Renewable Energy Index report from July has shown the exact opposite.

Power prices have risen in response to the shutdown of power stations like Hazelwood and Northern Power Station, but have been driven down by renewables.

Wholesale power prices are forecast to halve over the next four years due to the addition of extra large-scale renewables since October 2016.

And an Australian Energy Market Operator report has found that the most economical way to replace our ageing coal plants is with renewables.

“The lowest cost replacement for this retiring capacity and energy will be a portfolio of resources, including solar (28 gigawatts), wind (10.5 GW) and storage (17 GW and 90 GWh), complemented by 500 megawatts of flexible gas plant and transmission investment,” the report said.

The University of Newcastle’s economic modelling shows that if they can double the efficiency of their panels, and with a lifespan of 5-6 years, printed solar panels can be a cheaper power option than coal.

A criticism of rooftop solar is that the high initial cost outlay excludes renters and low-income earners from the market.

If the efficiency of printed solar panels can be improved, and if recycling of the plastic waste is accounted for in the business model, printed solar could give renewable energy a much needed egalitarian boost.