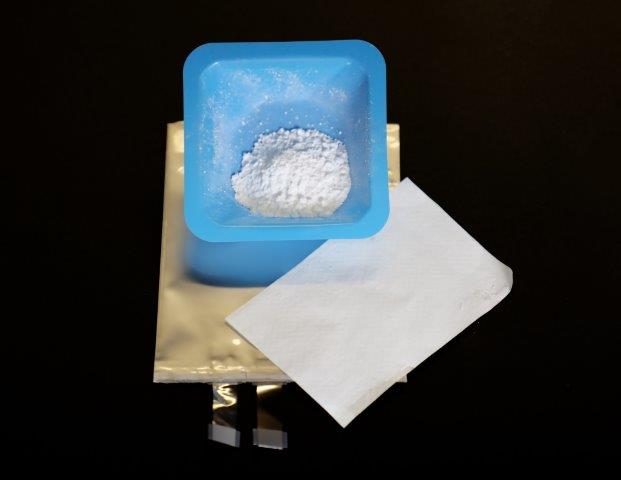 Researchers from Oak Ridge National Laboratory and the University of Rochester developed a method to prevent lithium-ion batteries from catching on fire when damaged.

“In a lithium-ion battery, a thin piece of plastic separates the two electrodes,” said Gabriel Veith, a research lead at ORNL. “If the battery is damaged and the plastic layer fails, the electrodes can come into contact and cause the battery’s liquid electrolyte to catch fire.”

One approach currently under investigation involves using a nonflammable, solid-state electrolyte. While promising, this method requires a different production method.

Instead, the team turned to an additive for conventional electrolytes that solidifies on impact, preventing the electrodes from touching if the battery is damaged during a fall or crash. If the electrodes don’t touch each other, the battery doesn’t catch fire. Plus, incorporating the additive would require only minor adjustments to the conventional battery manufacturing process.

The ability of the otherwise liquid electrolyte to become solid on impact then re-liquefy when pressure is removed is thanks to a colloid, which is a suspension of tiny, solid particles in a liquid. The effect, called shear thickening, is also seen in a common science experiment involving cornstarch mixed into water. In this case, the researchers used perfectly spherical, 200-nanometer-diameter particles of silica suspended in common liquid electrolytes for lithium-ion batteries. On impact, the silica particles clump together and block the flow of fluids and ions.

The team plans to enhance the system so the part of the battery that’s damaged in a crash would remain solid, while the rest of the battery would go on working. The team is initially aiming for applications such as drone batteries, but would eventually like to enter the automotive market. They also plan to make a bigger version of the battery capable of stopping a bullet.

Researchers at Binghamton University are developing a bacteria-fueled, paper-based battery to power medical biosensors and diagnostic devices in areas without readily available power.

Disposable paper-based biosensors have been developed for cheap and convenient diagnosis of diseases and health conditions, as well as for detecting contaminants in the environment. Many such devices rely on color changes to report a result, but they often aren’t very sensitive.

“Paper has unique advantages as a material for biosensors,” said Seokheun (Sean) Choi, an associate professor of electrical and computer engineering at Binghamton. “It is inexpensive, disposable, flexible and has a high surface area. However, sophisticated sensors require a power supply. Commercial batteries are too wasteful and expensive, and they can’t be integrated into paper substrates. The best solution is a paper-based bio-battery.”

To address this, the team built a paper battery by printing thin layers of metals and other materials onto a paper surface. Then, they placed freeze-dried “exoelectrogens,” a type of bacteria that can transfer electrons outside of their cells, on the paper. The electrons, which are generated when the bacteria make energy for themselves, pass through the cell membrane. They can then make contact with external electrodes and power the battery.

To activate the battery, the researchers added water or saliva. Within a couple of minutes, the liquid revived the bacteria, which produced enough electrons to power a light-emitting diode and a calculator. In the lab, the microbial battery produced a maximum power of 4 µW/cm2 and a current density of 26 µA/cm2.

The paper battery, which can be used once and then thrown away, currently has a shelf-life of about four months. The researchers are working on conditions to improve the survival and performance of the freeze-dried bacteria, enabling a longer shelf life. “The power performance also needs to be improved by about 1,000-fold for most practical applications,” Choi said, which could be achieved by stacking and connecting multiple paper batteries.

The team has applied for a patent for the battery and is seeking industry partners for commercialization.

Scientists at the University at Buffalo propose repurposing methylene blue, a sapphire-colored dye that is a common ingredient in wastewater from textile mills, as a component of redox flow batteries.

“Methylene blue is a widely used dye. It can be harmful to health, so it’s not something you want to dump into the environment without treating it,” said Timothy Cook, assistant professor of chemistry at UB. “There’s been a lot of work done on ways to sequester methylene blue out of water, but the problem with a lot of these methods is that they’re expensive and generate other kinds of waste products.”

When dissolved in water, methylene blue has the ability to capture, store and release electrons. In an initial test, the team built two simple batteries that employed the dye dissolved in salt water.

The first battery the researchers made operated with near-perfect efficiency when it was charged and drained 50 times, however its capacity fell as molecules of methylene blue became trapped on a membrane critical to the device’s proper function.

The second attempt used a new membrane material that maintained the near-perfect efficiency of the first model, but had no notable drop in energy storage capacity over 12 cycles of charging and discharging.

The researchers point to the results as a sign that methylene blue is a viable material for liquid batteries, and hope to take the research further by obtaining real wastewater from a textile mill that uses the dye.

“For this to be practical, we would need to avoid the costly process of extracting the dye from the water,” Cook says. “One of the things we’re interested in is whether there might be a way to literally repurpose the wastewater itself. In textile-making, there are salts in the wastewater. Usually, to make a redox flow battery work, you have to add salt as a supporting electrolyte, so the salt in wastewater might be a built-in solution. This is all speculative right now: We don’t know if it will work because we haven’t tested it yet.”

After obtaining textile mill wastewater, the team plans to evaporate the dye-containing wastewater into a more concentrated solution that can be tested directly in a battery.