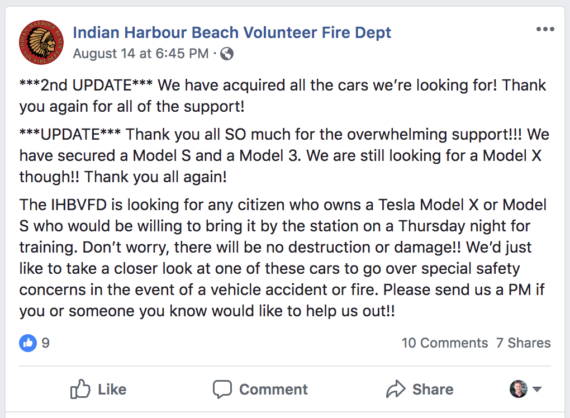 The volunteer Fire Department in Indian Harbour Beach, on Florida’s famous Space Coast, reached out to the community to learn more about Teslas and electric vehicles (EVs). The Fire Department reached out to the community, asking for volunteers to bring their vehicles to the station to help firefighters learn about how to respond to the new electric vehicles in the event of an accident or vehicle fire.

The department put out a call to the community via its social media channels and was rewarded with overwhelming support from the community.

Nevertheless, it is training like this that equips fire departments to be able to respond to and to effectively fight a fire in a Tesla vehicle. Recent fires and responses have revealed that while fires in Teslas are indeed far less likely to happen, fire departments still have some room to improve in terms of how they respond to them. Similarly, scrap and impound yards have to become aware of the vulnerabilities and potential liability of hosting a scrapped plug-in electric vehicle.

The Indian Harbour Beach Fire Department’s training shows that some stations are already working to bridge the gap and to meet the rapidly growing number of plug-in vehicles roaming the streets halfway.

The redditor who shared the event noted that along with the vehicles being present, an expert presented the specific differences with EVs. “He gave a presentation on each model and the different safety aspects of each (battery cut off, popping the hood, where to cut etc) and after let them interact with us owners and ask questions about the car. This was a great night and I hope more Fire Departments are just as forward thinking about the future as EVs become more and more mainstream!”