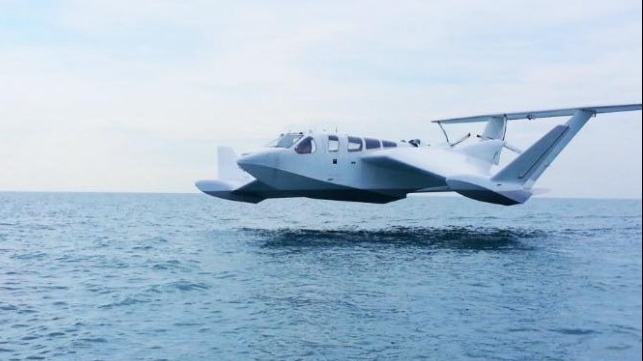 Over the past three years, various aviation technical publications have reported on developments in hybrid and battery-electric aircraft propulsion. A French made two-seat battery powered aircraft flew a distance of 300 miles in two hours at 20,000 feet. There would likely be scope to adapt future technology developments in hybrid and battery powered aeronautical propulsion to ground effect maritime technology involving wing ships that could occupy a unique future market niche.

Some 50 years ago, there were two forms of propulsion for small scale-model aircraft. Some lightweight models were made from Balsa wood and used a twisted rubber to drive the propeller to provide some short-distance propulsion while being tethered to a control line. Small single-cylinder 2-stroke piston engines provided the propulsion on larger radio controlled scale model airplanes and other tiny aircraft actually used solid-fuel rocket propulsion. Even as recently as 1980, builders of scale model aircraft generally avoided using electric motors to drive propellers and draw energy from small 1.5 volt and six volt batteries.

At the present day and courtesy of advances in low-weight rechargeable battery technology, electrically powered scale model helicopters, airplanes and drones are common. Battery powered flight has evolved beyond the scale model to include small battery powered airplanes that have actually carried people. Aviation analysts suggest that perhaps within the next decade, that battery powered regional and commuter planes could operate routes of 200 to 300-miles, with builders such as Eviation seeking to develop a plane capable of flying up to 650 miles. Many of the concepts and technology could find application in wing ships.

Builders of proven and tested wing ships are located in such places as Germany (Eco-Boat), Singapore (Air fish), Australia (Hover-wing) and South Korea (Aron and Wing Ship). While built to maritime structural standards, these winged vessels fly close to the water surface and typically consume about a third of the amount of energy as equivalent size and weight of short-haul airplanes that have to climb from ground level to elevations of more than 10,000 feet. By comparison, a Type-A wing ship would climb to 50 percent of its wingspan measurement and a Type-B wing ship would climb to 150 meters or 500 feet.

The combination of flying at lower speed and superior flight energy efficiency of the ground effect wings could extend the wing ship’s operating range to double to three times that of an aircraft, suggesting 400 to 1,000 miles for battery-electric powered wing ships. Type-B versions of wing ships built to less than the airport landing weight of commercial aircraft and maximum flight elevation of 150 meters could be assigned to provide future transportation service between coastal airports, on links such as Palermo – Rome, Brisbane – Sydney, Rome – Barcelona, Boston U.S. – Bermuda and Singapore – Penang.

Research and development is currently under way involving small-scale, closed-cycle gas/air turbine engines that operate under elevated pressure. Advances in silicon-carbide chemistry has produced a variant that offers one of the highest recorded coefficients of thermal conductivity and maintains constant mechanical properties at temperatures up to 1400-degrees C. This material forms the basis of heat exchangers used closed-cycle turbine engines that offer competitive energy efficiency and lighter weight than conventional gas turbine engines. Future long-haul commercial aircraft are expected to use turbine-electric propulsion while short-haul aircraft will include electric battery energy storage.

The batteries will recharge from the power grid during layovers at airports. During take-off that involves peak energy consumption, the combination of turbine engines and batteries will provide propulsion while during the flight, batteries would provide propulsion. The same power system would operate in comparable mode in hybrid-electric winged ships, with the combination of thermal engine and batteries providing acceleration to lift-off speed and batteries sustaining propulsion as the winged ship sails above the water surface. For winged ships, lifting off from coastal runways would consume less energy than lifting off from water runways.

Modern developments in electric transportation offer several possibilities by which to accelerate aircraft to lift-off speed. One option would be for a magnetically propelled carriage to carry the aircraft and accelerate to above aircraft lift-off speed, when battery and/or hybrid propulsion would blend in. The short-haul aircraft would then consume up to 30 percent of total energy requirement for its journey to lift itself to elevations of 3,000 meters (10,000 feet) to over 6,000 meters (20,000 feet). By comparison, a Type-B winged vessel would only need to lift itself to an elevation of 150 meters (500 feet) as it leaves from a coastal airport.

In commercial aviation, fuel has accounted for some 50 percent of aircraft operating cost. When measured on a per kilowatt-hour basis, electric power in most developed countries costs less than thermal engines consuming liquid hydrocarbon fuel to generate the same level of power output. However, the combination of capital cost, low performance at cold temperature, low power storage density, limited usable service life and replacement cost of storage batteries have been a disadvantage. Evolving research promises to greatly increase both the storage density and usable service life of storage batteries from 3,500 deep-cycle recharges to in excess of 20,000 deep-cycle recharges.