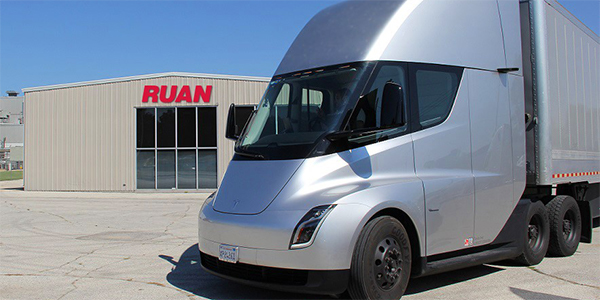 Electric car manufacturer Tesla Motors has driven a prototype of its much-hyped Tesa Semi to Ruan Transport Corp., an Iowa-based transportation management company that has reserved five of the electrically powered tractor-trailers, as part of a cross-country tour to demonstrate the technology, Ruan said today.

Tesla unveiled the vehicle in 2017, saying it would outperform conventional diesel-powered trucks while boasting a driving range of up to 500 miles when production begins in 2019. Since then, industry heavyweights such as FedEx Corp., Schneider Inc., J.B. Hunt Transport Services Inc., PepsiCo Inc., and UPS Inc. have paid deposits to reserve the vehicles.

Despite that demand, Tesla has made some investors nervous in recent months by missing production targets and deadlines for manufacturing its other electric vehicles, such as its Model 3 sedan. However, in recent weeks, Tesla has ramped up publicity for its Tesla Semi by posting videos to social media showing prototype versions cruising from the firm’s California factory through Colorado and visiting customers such as Lowell, Ark.-based J.B. Hunt.

The latest stop of that tour is Des Moines, Iowa-based Ruan, which said that representatives from Tesla Motors visited with Ruan team members and several customers this week for a viewing of the tractor-trailer. “We are excited to have an opportunity to experience the new electric semis,” James Cade, Ruan’s vice president of fleet services, said in a statement. “The reservation of these vehicles is part of Ruan’s sustainability efforts and commitment to providing our customers and professional drivers with the best technology available.”

While the $180,000 truck will cost more than a typical $100,000 diesel powered truck, the Tesla Semi will make up the difference through savings in aerodynamics, reliability, and fuel, Ruan said. However, Tesla has still not yet released details such as the total operating cost, according to Ruan.