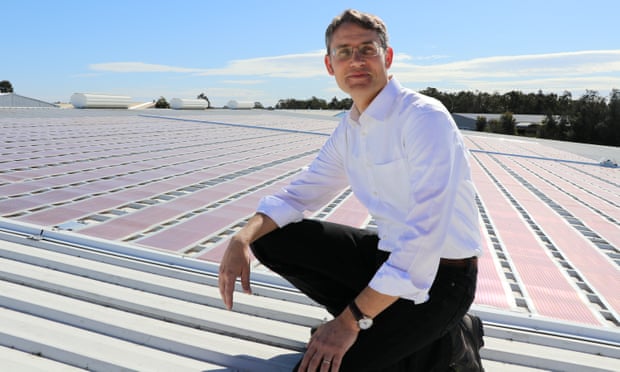 An Australian physicist is leading a push to pioneer a new type of low-cost solar energy he believes could make signing up for energy accounts as straightforward as taking up a mobile phone plan.

In May last year, the University of Newcastle professor Paul Dastoor used organic printed solar cells to power screens and displays at an exhibition in Melbourne.

Less than one millimetre thick and held down with double-sided sticky tape, the panels are similar in texture to a potato chip packet and can be produced for less than $10 per square metre.

Dastoor has been working on the technology for more than a decade, but has now begun a 200 square-metre installation – the first commercial application of its kind in Australia and possibly the world.

“The low cost and speed at which this technology can be deployed is exciting as we need to find solutions, and quickly, to reduce demand on base-load power – a renewed concern as we approach another summer here in Australia,” he said.

And as Canberra is again gripped by energy policy inertia, he said the commercial pilot was an example of industry and academia “just getting on with things”.

“If we reflect on where we’ve come from in the last decade and what we’ve seen in the last couple of weeks in Canberra, one of the things this project highlights is that universities and industry are coming together to just to get on with things and that’s exciting.”

The printed solar technology is not as efficient as the silicon-based one, and degrades much faster.

But Dastoor believes its low production and installation costs would make it competitive.

“The point of this technology is that if you look at it in terms of raw efficiency numbers, it’s much lower than typical silicon cells [and] it doesn’t last as long but actually those aren’t the important numbers,” he said.

“The question is how much does the energy cost? These materials are so cheap to make, manufacture and install that when you calculate the total cost of energy when manufacturing at scale, it’s going to give you a competitive product.”

Dastoor said it would be easy for companies to sell energy “plans” for consumers to sign up in the same way they do with mobile phones.

The commercial installation was completed in a day by five employees, and a lab-size printer can produce hundreds of metres of the product in one day.

“The caveat to that is I’m obviously not sure exactly how the commercial reality will manifest, but if I was going to guess I would say that this technology is one that does not last an extremely long time [but] is also likely to improve rapidly,” he said.

“Both of those factors are similar with what we faced with mobile phones [so] I think it points to a model where you will simply have all of that done for you – it will be some sort of plan with constant upgrade and replacement.

“The cost to produce it is so low and to roll out another set of solar cells is going to be extremely easy. I think over time our current picture of how we view solar energy and cells is going to fundamentally change.”

The pilot installation is due to last six months, and is the final stop before the technology becomes more widely available in the next few years.