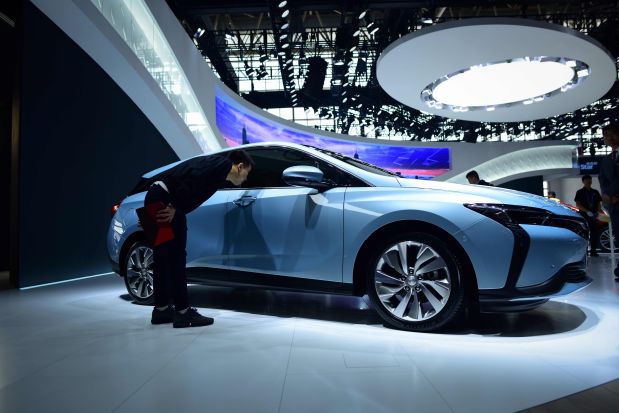 General Motors Co.’s GM -0.98% plans to ramp up electric-vehicle production in China were set back after the auto maker determined the Chinese-made batteries it intended to use failed to meet its own performance and safety standards during testing.

GM was set to enter production next month on its plug-in hybrid Buick Velite 6, a local variant of the Volt, with a pure-electric version due to follow early next year.

That launch schedule has now been postponed, with internal tests showing the battery, supplied by A123 Systems, didn’t meet GM’s own quality standards, according to a person familiar with the situation. EV batteries are complex components that can’t easily be switched, spelling lengthy delays in getting the Velite 6 into production.

A GM spokeswoman declined to comment on the situation, but said the company still intends to launch 10 EVs in China by 2020. However, that target was announced over a year ago, long before the battery supply problem arose.

A123 Systems didn’t respond to a request seeking comment. The Livonia, Mich.-based company was bought out of bankruptcy by Chinese auto-parts giant Wanxiang Group Corp. in 2013, and it operates a battery plant in the eastern city of Hangzhou to supply the China market.

Auto makers operating in China are scrambling to fulfill a Chinese government order requiring them to start building electric vehicles next year. Without a battery, GM is one of those in danger of missing Beijing’s target.

China’s timetable is “difficult to achieve” for longtime manufacturers of gasoline cars being forced to make the rapid switch to electric, said Jing Yang, an associate director at Fitch Ratings. “The situation is different company by company,” she said, with some players well set to meet the target, and others floundering.

Though seen as an EV market leader in the U.S., where it sells the Chevrolet Bolt and Volt electric cars, GM has had difficulty translating that advantage into success in China, the world’s biggest EV market.

Auto makers cite the exclusion of foreign batteries as an example of Chinese government protectionism that handicaps both foreign battery firms and the auto makers they supply, while handing advantages to local rivals. Those complaints are among the factors fueling the U.S. trade actions against China.

China’s Ministry of Industry and Information Technology didn’t respond to a request for comment.

The Chinese are on course to buy more than 1 million electric vehicles this year—nearly all of them built by local auto makers. Riding the boom are fast-growing Chinese battery suppliers such as BYD Co. and Contemporary Amperex Technology Co. , now among the world’s biggest lithium-ion battery companies.

In its rush to develop battery technology, China risks shortcomings in quality and safety performance, said Thomas Barrera, president of LIB-X Consulting, a battery consultancy based in Long Beach, Calif.

“There are concerns with the quality of Chinese-manufactured cells and batteries,” he said. “Chinese cells are very attractive because they’re inexpensive, but people may not realize that these cells may not have gone through the necessary qualification testing before going to market.”

China’s EV policies have created a dilemma for foreign auto makers: they are obliged to build electric vehicles and use Chinese batteries, but they can’t compromise their global standards and use components in which they lack confidence—especially batteries, which have a history of catching fire.

While most foreign auto makers have publicly expressed confidence in their ability to meet the EV quota, few have explained in detail how they will achieve a target requiring electric vehicles to make up roughly 3%-4% of their 2019 output.

Some are making tangible progress. On Monday, Nissan Motor Co. started production of its first made-for-China electric car, while Volkswagen AG unveiled its first pure-electric car for China in April.

Ford Motor Co. —which began developing electric vehicles later than rivals such as GM—currently has one plug-in hybrid model on the market in China, and plans to launch its first pure-electric car by the end of 2019.

GM launched its first Chinese pure-electric car, the Baojun E100, last year. It has sold more than 22,000 units of the budget EV—which starts at about $6,900—despite only making it available in a handful of locations so far. However, GM, which builds roughly 4 million cars in China a year, would need to build about 100,000 E100s next year to meet the quota, assuming other models fail to come onstream.

There is a backstop for auto makers that miss the 2019 target: the regulations allow them to transfer EV credits earned in 2020, and use them to make up any 2019 shortfall. If they are still noncompliant, auto makers will then be forced to buy EV credits from rivals through a credit-trading system which the authorities have yet to articulate in detail.

Auto makers bringing electric vehicles to market early can benefit from generous subsidies, but those are due to end in 2020.

“Traditional auto makers will no doubt struggle to remix their portfolio to EVs,” said Bill Russo, the founder of Automobility, a Shanghai consultancy. And without subsidies, the struggle to build enough electric vehicles will soon become a battle to make the costly machines profitable, he said.