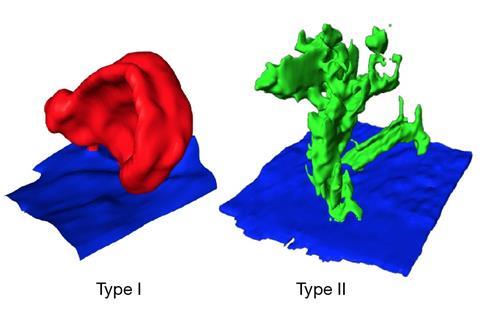 Researchers in the US have peered inside lithium metal batteries to scrutinise their chemistry and structure. Using fast freezing to look at the interface between the metal electrodes and liquid electrolyte, they uncovered a new aspect of electrode degradation that helps explain loss of battery capacity over time.

Lena Kourkoutis and her team at Cornell University, New York, adapted a technique more often used in biology to immobilise specimens by rapid freezing. They examined thin slices through the snap-frozen electrode–electrolyte interface with a cryo-scanning transmission electron microscope (cryo-STEM), a technique that won the Nobel prize for chemistry in 2017.

‘Lithium metal batteries have huge potential because they have a very high energy storage capacity,’ says Kourkoutis. ‘The minor [problem] is that they are unsafe and often catch fire after a few cycles of charging and discharging.’

This happens if a finger of material (called a dendrite) starts to form on the anode, and grows across the electrolyte to touch the cathode. This can short the battery, triggering thermal runaway and fire. Today, lithium metal is only used as an anode in non-rechargeable batteries, to avoid this shorting risk.

The cryo-STEM revealed a layer of lithium ethylene dicarbonate at the solid-electrolyte interphase (SEI) layer, much thicker than previously thought, and two distinct types of dendrites growing on the lithium anode. As well as the expected lithium metal dendrites, there was another more surprising form, says Kourkoutis, made of lithium hydride. ‘This second class of dendrites is really important because they are thin, brittle and winding structures that are likely to break away from the electrode during battery charge–discharge cycling,’ she explains. Once the lithium breaks off, it cannot be reintegrated into the anode, and hence reduces the battery’s capacity to hold charge.

‘These findings are transformative,’ says David Mitlin, an electrochemist at Clarkson University, US. ‘Hydrides are extremely brittle. If you are growing a significant fraction of hydrides, that has huge implications for the mechanical properties of the [interface] layer and how to tune it.’

The hydrides were a complete surprise for him, and he suggests a need ‘to reconsider the electrolyte decomposition reactions’ and whether the interface layer is ‘much less stable than people first imagined’.

‘It will be an interesting approach to apply to look at lithium plating or dendrites in commercial lithium ion batteries as well,’ says Vanessa Wood, materials scientist at the Swiss Federal Institute of Technology in Zurich. ‘A challenge there is getting the resolution needed to see solid–electrolyte interphase that is often an order of magnitude smaller.’

Mitlin says dendrites prevent commercialisation of rechargeable lithium metal batteries. ‘This doesn’t solve dendrite growth, but could transform how people view the problem, which can be key to finding the solution.’