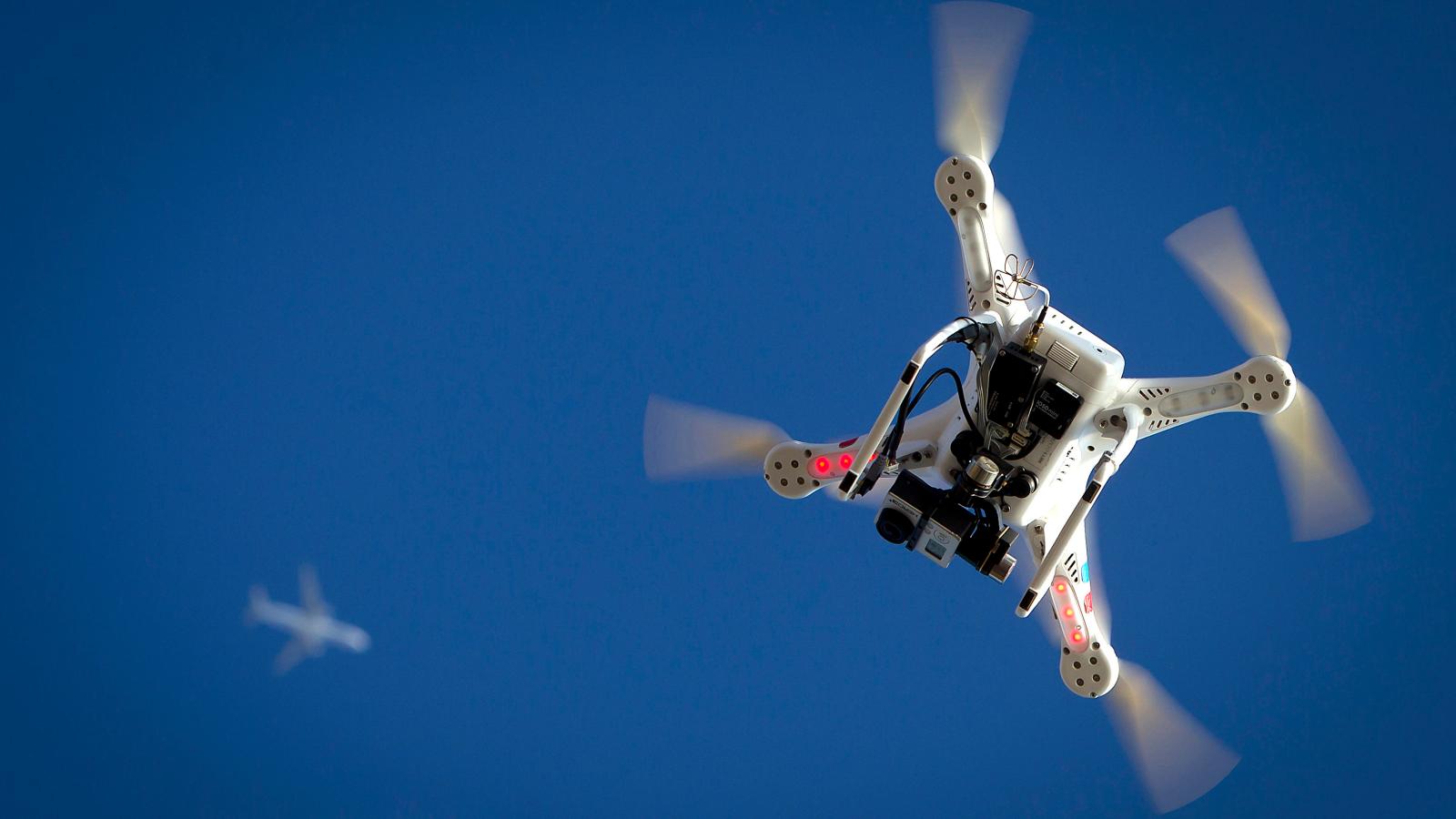 Lithium-ion batteries were first introduced to the public in a Sony camcorder in 1991. Then they revolutionized our lives. The versatile batteries now power everything from tiny medical implants and smartphones to forklifts and expensive electric cars. And yet, lithium-ion technology still isn’t powerful enough to fully displace gasoline-powered cars or cheap enough to solve the big energy-storage problem of solar and wind power.

Dave Eaglesham, the CEO of Pellion Technologies, a Massachusetts-based startup, believes his company has made the leap beyond lithium-ion that will bring the battery industry to the next stage of technological disruption. He and his colleagues have accomplished something researchers have been struggling with for decades: they’ve built a reliable rechargeable lithium-metal battery.

Though other startups have for years made various claims about lithium-metal batteries, none yet have gotten past the development or testing phases; Pellion has already been selling their battery to at least one buyer since February.

Pellion’s battery can pack nearly double the energy of a conventional lithium-ion battery, making it able to, for example, double the time a drone can spend in the air. That 100% increase in energy density is a step change compared to the annual 10% or so improvement the battery industry currently averages. If Pellion overcomes early limitations, its batteries have the potential to power a Tesla car for 800 km (500 miles) on a single charge, rather than today’s upper limits of 400 km.

The story of a pivot

The lithium-ion battery is named for its use of charged atoms—also known as “ions”—of lithium. The ions shuttle between two electrodes (the anode and the cathode) as the battery is charged and discharged.

One of the limitations of this tech is that a lithium ion carries only a single positive charge. In theory, simply using magnesium ions—which carry two positive charges—would mean packing in a lot more energy in the battery. In 2011, Robert Doe, a postdoctoral student at MIT, and his then supervising professor Gerd Ceder, founded Pellion with the goal of building a magnesium-ion battery. Within two years, Pellion had a working prototype in the lab. But it had a lot of problems. Though the battery worked, it was no match for lithium-ion batteries on simple things like charging and discharging with consistency.

That’s when Eaglesham joined as CEO. “We had the world’s best magnesium battery, but I couldn’t see how to turn it into a compelling product,” he says. However, Eaglesham noticed that in the process of building a working prototype, Pellion had solved one of the industry’s long-standing challenges for rechargeable batteries: how to put a metal on the anode safely.

Energy-rich metals like lithium and magnesium tend to be highly reactive. And a complete battery, when packed with an energy-dense electrolyte, makes the system even more dangerous. Remember the exploding Samsung Galaxy Note 7?

That’s why typical lithium-ion batteries use anodes made of graphite, a form of carbon. But graphite anodes can only store one atom of lithium for every six atoms of carbon. Replace graphite with an anode made entirely of lithium atoms—aka a lithium-metal anode—and you’ve just saved a lot of space in your cell.

In a study published in January this year, Paul Albertus, a program director at the US Advanced Research Projects Agency–Energy (ARPA-E), used this graphic to show how dramatically more energy-dense a lithium-metal battery could be: 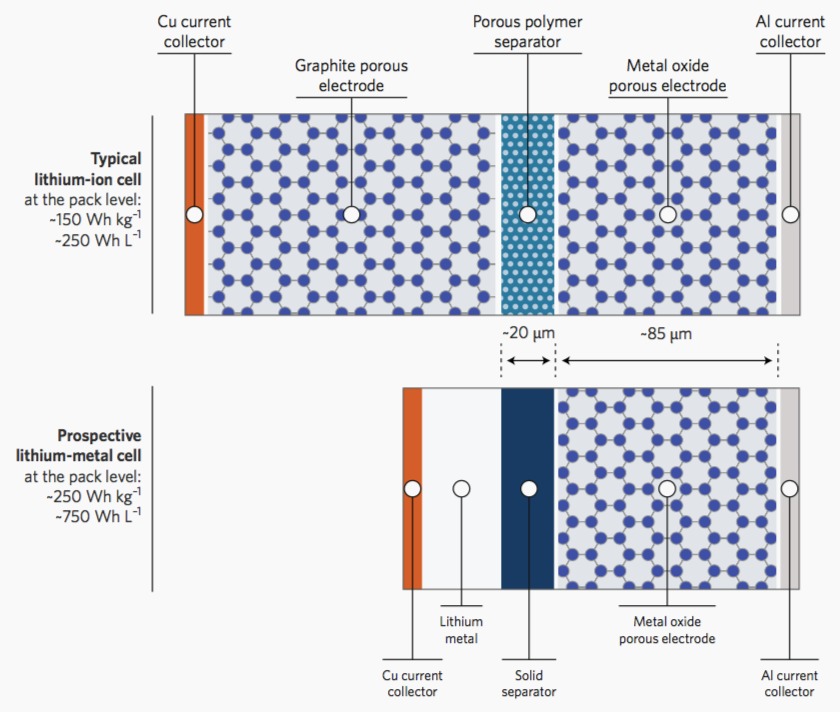 Eaglesham made the case to his new colleagues at Pellion that, if they’d found a way to use a metal anode safely, it would be better to pivot to lithium rather than struggle with magnesium. That way, they could take advantage of more than three decades of work done on lithium-ion technology to solve the little but important problems, such as charging consistency or voltage fluctuations, while still creating an energy-dense battery and moving the needle on innovation in the industry.

Scientists have long understood that a lithium-metal anode would theoretically pack in more energy. In fact, the first lithium-ion cells that oil giant Exxon developed in the 1970s contained lithium-metal anodes. (Exxon was working on batteries then because it worried that oil might run out one day.) Single-use lithium-metal batteries were commercialized about the same time and they are used even today in specialized applications, such as deep-sea drilling.

Commercializing rechargeable lithium-metal batteries is a bigger challenge. In the 1980s, Moli Energy, a Canadian startup, was the first to succeed. But some of its batteries started catching fire, and the company had to issue a recall. The incident led to legal action and Moli Energy was forced to declare bankruptcy.

The use of lithium metal in rechargeable batteries creates three big problems. First, it reacts with everything: water, oxygen, and even nitrogen (all of which are present in the air around us), making it more likely to catch fire.

Second, lithium’s reactivity means it suffers side reactions with the battery’s liquid electrolyte, which is itself an energy-rich medium. These undesirable reactions reduce the amount of lithium available and worsen the battery’s life with every charge-discharge cycle.

Third, when a lithium-metal battery discharges, lithium ions separate from the surface of the anode and travel to the cathode. When the battery is charged the same ions travel back and deposit onto the anode as lithium metal. But instead of forming a nice smooth coating on the anode, lithium metal has the tendency to generate “dendrites,” chains of lithium atoms growing from the surface of the anode, which look like the roots of a tree. The dendrites grow bigger with each charge-discharge cycle, eventually reaching the cathode and causing the battery to short, leading to fires.

As the industry struggled through these problems in the late 1980s, Sony invented the graphite anode. Though less energy-dense, it suddenly made lithium batteries a lot safer and more reliable. Since then, graphite anodes have remained the mainstay of the industry.

Nearly 30 years later, however, we are brushing up against the limitations of the graphite anode. Next-generation applications such as cheap electric cars and electric airplanes will need batteries that carry the same amount of energy but weigh a lot less and take up a fraction of the space of today’s batteries. A slew of companies are in a race to build the next revolutionary anode, and venture capitalists are pumping in hundreds of millions of dollars in the hope of making a winning bet.

To counteract lithium’s high reactivity, some battery developers have tried to install additional safety equipment to keep the lithium from coming into direct contact with water, oxygen, or nitrogen inside the battery. That inevitably increases the cost of manufacturing.

Some customers, such as commercial-drone users, are willing to pay premium prices. But Eaglesham believes it also means such battery makers don’t have a business that can scale beyond niche markets.

Even if somehow the costs could be reigned in, batteries with lithium metal inside are less likely to pass safety tests, according to Eaglesham. These tests are designed to put the battery in extreme, but real-life, conditions: piercing a nail into the battery (which might happen in a car accident) or heating it to more than 50°C, or 122°F (a temperature that the interiors of cars or drones can easily reach).

The industry is littered with examples of companies that tried to build a lithium-metal battery but failed. For example, Arizona-based Sion Power built a lithium-sulfur battery (where the anode is lithium metal and cathode is made of sulfur) and used it for record-setting unmanned autonomous vehicles flights. But it abandoned the technology before reaching commercial scale. (It is still trying to develop lithium-metal batteries, but this time with a different cathode.)