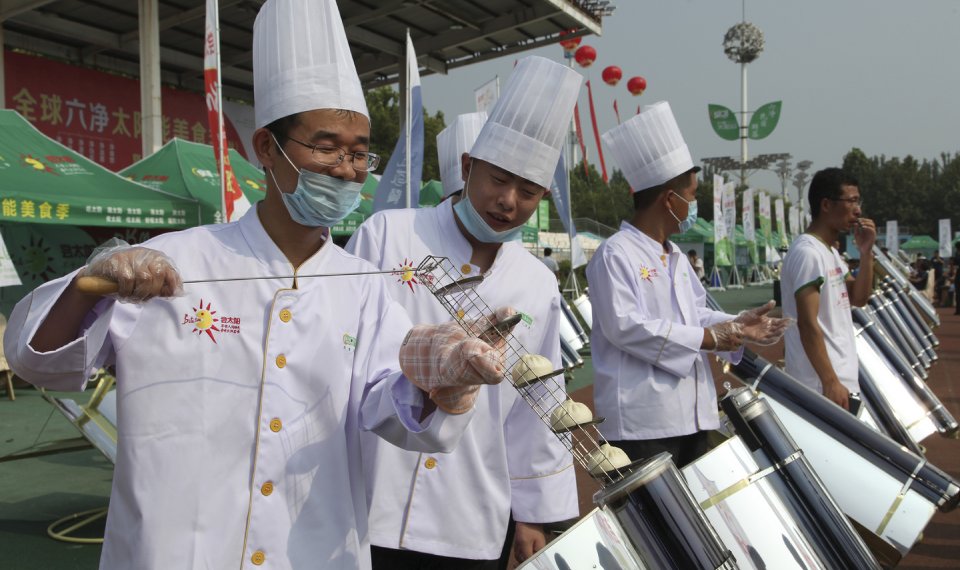 The savory aromas of roasting hot dogs and chicken kebabs wafted out of metal and glass vacuum tubes heated by mirrors curved to capture the sun’s heat.

“We aim to enable half of the world’s population to use solar cooking within 10 years,” said Huang Ming, founder of Himin Solar Energy Group, the solar cookout’s main backer.

Temperatures can top 400 C (750 F) inside the black “BBQ tubes” of metal and glass with turnip-tipped bottoms and sealable tops. On a bright day, they can boil water within 30 minutes and roast a fish in half that time, according to Himin.

“It is clean and smoke-free . better than cooking with pots and other things,” said Yu Liqiu, 22, a chef, who just began cooking with solar two days earlier.

Dezhou, a sprawling city of 5 million in eastern China, has spent millions since 2005 on transforming itself into an aspiring renewable energy hub called the “Solar Valley.”

Eastern China is a “global hotspot” for black carbon emissions __ sooty particulates more damaging to health and the environment than typical greenhouses gases __ according to a 2007 report in the academic journal Nature. Half of China’s black carbon comes from residential kitchens and heaters.

Sun Penglong, 27, worked in gas kitchens in Dezhou for years before switching to solar. He says new recipes must be invented and tested for solar cooking, but there is one unexpected perk: His wife doesn’t complain about the smell he used to bring home in his workclothes.

“The first thing my wife used to ask me to do after returning home was to shower,” Sun said after roasting some beef skewers in a BBQ tube.

“When I started as a solar chef, my wife asked me, ‘Where is your smell?'”