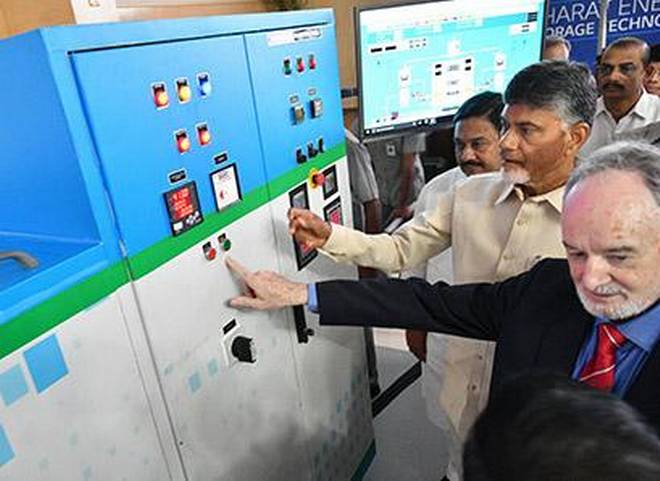 Chief Minister N. Chandrababu Naidu unveiled what is being claimed as the world’s first ingeniously made high energy storage device developed by the Bharat Energy Storage Technology Private Limited (BEST) at the Praja Vedika at his camp office in Amaravati on Monday. Touted to be a breakthrough technology, the device, half the size of a living room, is expected to power a bunch of households.

Addressing the gathering, he said he was impressed with the Bharat Energy’s business plan and announced 100 to 150 acres for the ‘Energy University’ and other energy initiatives in Visakhapatnam. “I’m very happy to inaugurate this storage energy at my camp office. There is a huge opportunity for such equipment in India as it is helpful in grid balancing and affordable storage. I introduced power sector reforms in 1990s and now we are introducing the second phase in which we are upgrading production, storage and supply so that there is no shortage,” Mr. Naidu said.

Speaking about the technology, Chairman and patent holder of BEST Patrick Glynn said, it was the result of decades of experiment. “It’s like storing hot coffee in a flask. We store heat and produce energy using closed heat engines. The equipment is 90% recyclable and it can be charged and discharged like any other battery,” Dr. Patrick said. The company had competitively priced the equipment and the pricing was likely to come down in the years to come, he said. As per a market estimate, the potential of the new invention is a $6 billion in India by 2020 and $100 billion by 2030.

On the occasion, the IIT Roorkee entered into a Memorandum of Agreement with BEST on renewable and sustainable energy technologies for research and industrial collaboration. The Griffith University, Australia, also tied up with BEST in the energy storage sector.