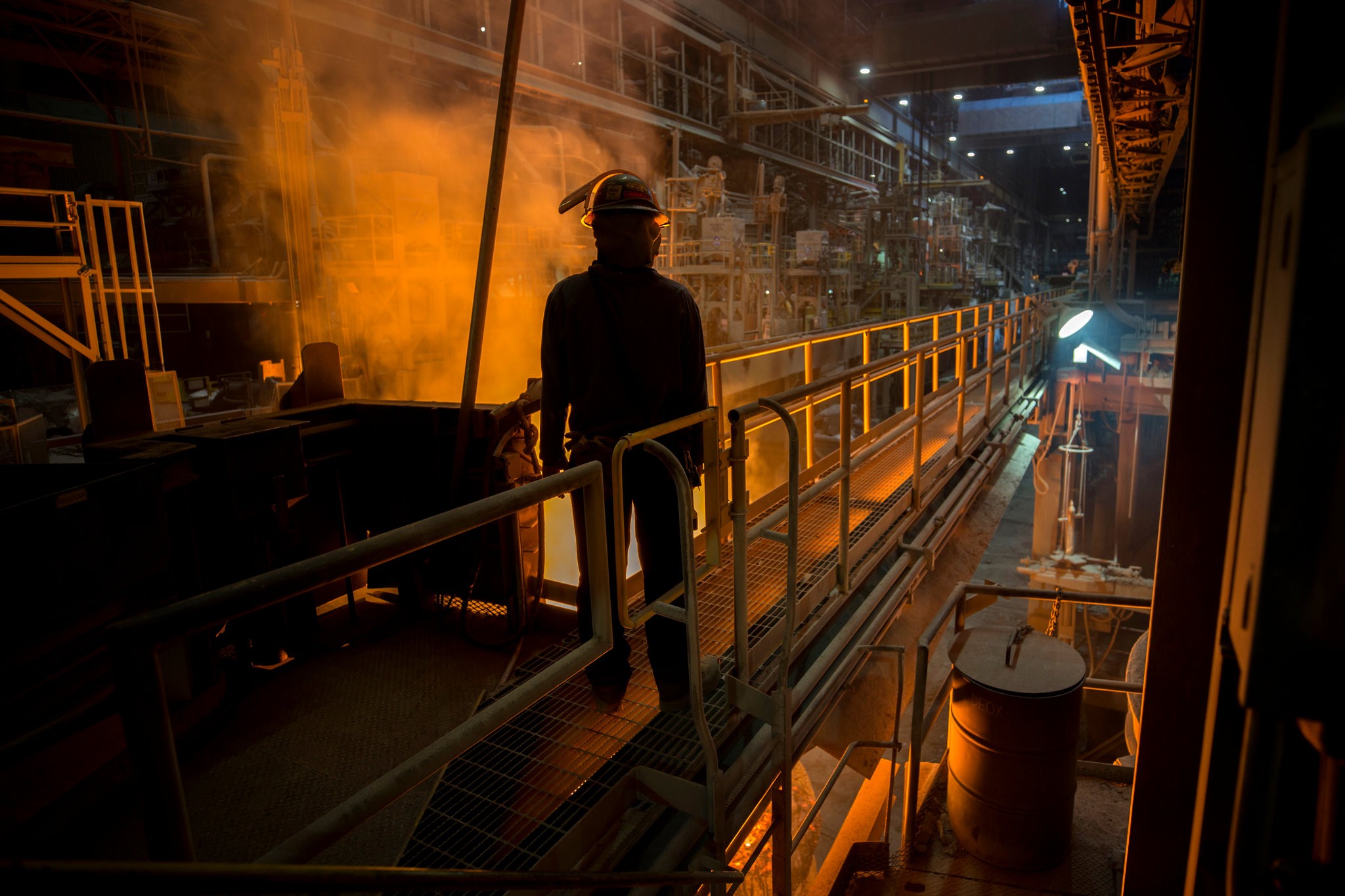 Two of America’s biggest steel manufacturers — both with deep ties to administration officials — have successfully objected to hundreds of requests by American companies that buy foreign steel to exempt themselves from President Trump’s stiff metal tariffs. They have argued that the imported products are readily available from American steel manufacturers.

Charlotte-based Nucor, which financed a documentary film made by a top trade adviser to Mr. Trump, and Pittsburgh-based United States Steel, which has previously employed several top administration officials, have objected to 1,600 exemption requests filed with the Commerce Department over the past several months.

To date, their efforts have never failed, resulting in denials for companies that are based in the United States but rely on imported pipes, screws, wire and other foreign steel products for their supply chains.

The ability of a single industry to exert so much influence over the exclusions process is striking even in Mr. Trump’s business-friendly White House, given the high stakes for thousands of American companies that depend on foreign metals. But the boundaries of trade policy are being tested by the scope of Mr. Trump’s multifront trade war with allies and adversaries alike, which includes tariffs on up to $200 billion worth of goods from China and possible tariffs on automobiles and auto parts.

Mr. Trump’s decision to impose 25 percent tariffs on steel and 10 percent on aluminum, even from allies like Canada, Mexico, the European Union and Japan, is just one part of that battle. But it has drawn a strong rebuke from foreign governments, Republican lawmakers and many business groups, including automakers, beverage companies, farm equipment manufacturers and food packagers, who say it will inflict financial pain on companies that employ millions of American workers.

To help minimize the impact, the administration established a process for companies to request “exclusions” for any product they could not otherwise buy in the United States, such as tire rods or razor blades. But the Commerce Department, which is overseeing the process, also allowed American companies to argue against an exclusion request. The metal tariffs are the only ones so far to have such a process.

Since May, companies have filed more than 20,000 requests for steel tariff exemptions. As of the end of July, the Commerce Department had denied 639 requests.

Half of those denials came in cases where United States Steel, Nucor or a third large steel maker, AK Steel Holding Corporation, filed an objection, a New York Times analysis shows. Nearly all of the rest were in cases where the company applying for an exclusion erred in its submission, Commerce Department officials say.

Department officials said on Friday that they have not granted a single steel exclusion request that drew an objection. They have granted 20 aluminum exclusions over an objection, because the objecting company did not actually cite the product in question.

Wilbur Ross, the commerce secretary, has defended the exclusion process and said the steel makers’ ability to provide products should be taken into account.

“If a product is available in enough quantity and quality to meet demand, the objection is generally sustained,” Mr. Ross said in an email. “Each situation is treated individually. If no objection has been filed, and there is no specific national security issue regarding the import, we generally grant the exclusion request.”

Mr. Trump has made no secret that he wants to boost American steel makers, and several of his top administration officials have deep ties to the steel industry. As the head of a private equity fund, Mr. Ross bought and operated several steel companies, which he later sold at a profit, and he sat on a steel company’s board of directors until his confirmation.

The United States trade representative, Robert Lighthizer, represented United States Steel and other steel manufacturers in private practice as a lawyer, and so did his deputy, Jeffrey Gerrish. Nucor spent $1 million to fund a documentary, “Death by China,” made by Peter Navarro, a Trump trade adviser, in 2011.

Nucor has played a role in one-quarter of the denials. In most cases, at least one other company also objected to a request that drew an objection from the three large steel makers.

The rejected companies do not agree.

“They’re hiding behind the government to try to keep them going,” said Joel Johnson, the chief executive of the United States arm of Borusan Mannesmann, a Turkish-owned manufacturer that imports steel pipes from its parent company and finishes them at its plant in Baytown, Tex. The company’s exclusion requests were denied by the Commerce Department after United States Steel and others objected.

In a 31-page objection filed in May, United States Steel officials said, “There is no national security interest in drawing further foreign Turkish investment into the United States to produce a product that is already produced in the United States, and for which substantial excess capacity exists.”

Mr. Johnson said the company requested an exclusion so it could have time to build a United States-based factory that could produce what it now imports. The investment would create more than 170 jobs, on top of the 264 people Borusan Mannesmann now employs in Texas.

He said the objections were an obvious attempt to block the competition that would come from his company’s proposed new mill in Texas. “I’d be doing exactly what they’re doing, if I were them,” he said.

The tariffs are beginning to reap dividends for the steel industry — a development that Mr. Trump frequently boasts about.

“Tariffs have had a tremendous positive impact on our Steel Industry,” Mr. Trump said in a tweet on Saturday.

Nucor reported its highest second-quarter revenue in company history last month. United States Steel said last week that its prices and profits have surged since the tariffs were implemented. Mr. Trump recently flew to Illinois to celebrate increased output and employment at a United States Steel plant in Granite City.

Some companies that have been denied exclusions have been forced to enter negotiations with Nucor over supplying steel products that are subject to tariffs or dropping its objections to their requests, according to a lawyer who works with those companies.

Critics say the exclusions process has overwhelmed Commerce Department staff members, who do not have the resources to sift through thousands of complicated requests and objections and judge them on their merits. They say the default position is to simply listen to a company that objects, regardless of whether the objection is legitimate.

“This process was not designed to be successfully navigated” by manufacturers seeking exclusions, said Richard Chriss, the president of the American Institute for International Steel, which has sued to block the tariffs on constitutional grounds.

In April, Senator Orrin G. Hatch of Utah, the Republican chairman of the Senate Finance Committee, and Senator Ron Wyden of Oregon, the panel’s top Democrat, sent a letter to Mr. Ross urging him to improve the process and expressing concern about whether the Commerce Department was taking steps to prevent the program “from being abused for anticompetitive purposes.”

The three large steel makers are by far the most aggressive objectors in the exclusions process. Nucor and United States Steel have each filed more than 1,000 objections, some of which overlap. AK Steel has filed nearly 700 objections.

The department has granted more than 1,300 steel exclusions. More than 70 percent of those exclusions — nearly 1,000 of them — have gone to a single company that has managed to draw few objections to its requests: South Carolina-based Greenfield Industries, which makes drill bits, saw blades and other cutting tools. Since 2009, Greenfield has been owned by a Chinese company, Top-Eastern.

Steel makers’ objections to others’ requests take a variety of forms. Sometimes, the steel makers allege the company seeking an exclusion made an error in its filings. Sometimes, they criticize companies for choosing not to produce steel in the United States and instead buying it from overseas producers; one company’s decision to cease domestic production of steel slab “directly undermines U.S. steel production and should not be rewarded with the requested product exclusions,” Nucor wrote in a comment.

Often, the steel makers claim that an American mill is producing the product in question, or could produce it if asked. “Nucor can offer a substitute for the requested product out of stock immediately (i.e., within 8 weeks),” the company wrote in response to an exclusion request from Houston-based SEBA Tubular, which had sought to import steel bars from Turkey, citing insufficient supplies from American mills. “To the extent that further manufacturing is required, Nucor can ship/deliver the product within the above-referenced time frames.”

The SEBA request was denied. Company officials did not respond to a request for comment.

Mr. Ferriola, the Nucor chairman, said his company generally objects to exclusion requests if it produces the product in question or a substitute, or if it believes that granting the exclusion would undermine national security. “We should be able to compete against any steel maker in the world, but we cannot compete against those who dump artificially cheap steel into our market at prices that are lower than our cost of production,” he said. “That is why Nucor continues to assess market conditions, and will be proactive and aggressive in pursuing trade cases and objecting to exclusion requests, when and where it is appropriate.”

Asked if the company’s success in blocking exclusion requests was related to the investment in Mr. Navarro’s film, a company spokeswoman, Katherine Miller, said in an email that “as America’s largest steel producer, we have been actively engaged in the trade arena for almost two decades. Over this time, we have been outspoken that our government must take a much tougher line with countries that continuously violate the rules of free trade. The documentary produced seven years ago provided another medium to discuss this critical economic issue.”

A United States Steel spokeswoman, Meghan M. Cox, noted that the company has filed comments on “less than 10 percent of the total requests posted by the Commerce Department” and “only on those tariff exclusion requests that are for products that we make.”

“With the restart of one blast furnace earlier this year and preparations for another blast furnace restart in October underway at our Granite City Works,” Ms. Cox said, “we are willing and able to support substantial proportions of increased domestic demand for many steel products.”