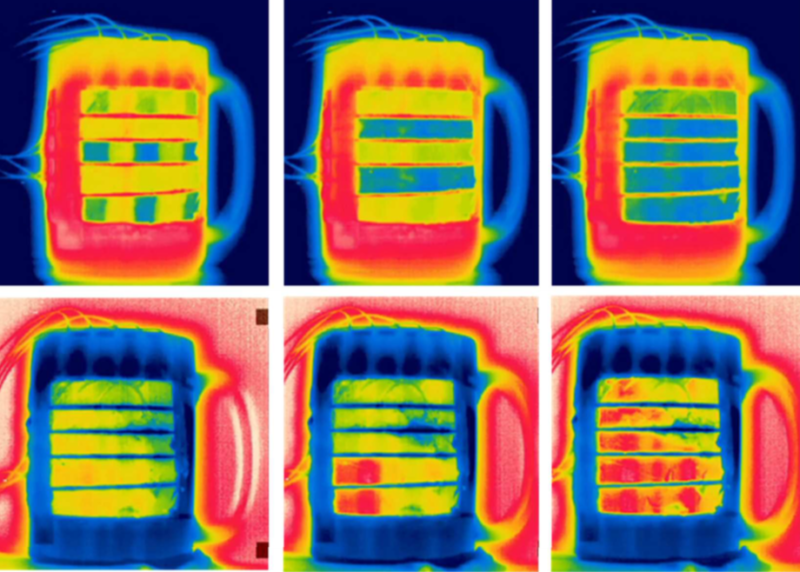 All this control of light is indirect, coming via our control of materials that the light interacts with. Now, researchers have crafted a material that adapts its properties so that its infrared appearance is either hotter or colder than the object it encloses. In other words, hot objects appear cold, or cold objects can appear hot—it’s infrared camouflage.

It’s all about those electrons

So, do you make yourself some infrared camo gear? The basic procedure is to control the efficiency with a material that can emit infrared radiation. Take gold as an example. Gold is a nearly perfect metal: it has high conductivity and does not absorb infrared radiation very easily. That means it will reflect incoming radiation; this is why emergency blankets have a thin gold coating: the gold reflects your own infrared radiation back to you to keep you warm.

At the other end of the scale you have something like the black soot from a fire. Soot is not very reflective, so the background infrared radiation is not scattered by the soot. But, if it is placed on a heating plate, it will glow in the infrared. Gold, by contrast, doesn’t tend to emit at these wavelengths.

The efficiency with which a material emits (or absorbs) light is described by its emissivity, which scales from zero to one. Gold is very close to zero, while a perfect emitter (like soot) is close to unity.

Emissivity is the knob that the researchers turn to control the infrared appearance of their material. To do this, they make use of the unusual properties of graphene. Graphene is a single layer of carbon atoms, all arranged in a hexagonal pattern. It’s not quite a metal; it is more like a semiconductor like the silicon that the CPU powering the device you’re reading this on is made from. The difference is that silicon only starts to conduct if you apply a measurable voltage to it, while graphene starts to conduct as soon as the voltage is non-zero (this is called a zero band gap semiconductor). This means that graphene always has electrons available to conduct—but not all that many. And, when you take into account defects in fabrication, the conductivity of some graphene layers can be quite poor.

But, like other semiconductors, the conductivity can be changed by adding impurities that contain additional electrons. For instance, adding a small amount of phosphorus to silicon gives it a higher conductivity, because phosphorus has spare electrons to give up.

The researchers made a thick graphene layer (around 100 to 150 graphene sheets thick) that had very poor conductivity. As a result, the emissivity of the layer is quite high. Under that layer, they placed a thin coating of ionic fluid. The ionic fluid is, essentially, a liquid salt (not a salt dissolved in water). The liquid salt was sealed in place by a thin layer of transparent plastic and the whole lot was placed on a thin gold electrode.

Under ordinary conditions, the salt layer sits outside the graphene layer, which absorbs and radiates infrared light. However, if a voltage is applied between the graphene layer and the gold layer, then the ions in the liquid move into the graphene, giving it a higher conductivity. As a result, it stops absorbing and radiating infrared radiation and becomes an infrared reflector. Even better, the transition from absorber to reflector is controllable. Different voltages result in different conductivities, so the emissivity of the graphene layer varies continuously from its maximum to its minimum value (0.8 to 0.35).

At first this appears counterintuitive: if the layer is glowing hotter than the thing it is covering, surely the material is actively cooling the hot plate. I would say that, on the face of it, this has to be true. But in practice, it depends on a number of factors: the temperature of the object depends on the efficiency of its infrared radiation emission but also on its conduction to the surroundings and convection (the mass motion of warm fluid, like air, carrying heat away). The covering could simply change the balance between these different heat transfer mechanisms rather than actually cool the covered object.

The researchers show lots of pictures and movies of their material camouflaging hot objects. They show that the material is flexible, so it could be worn. And, equally important, it is vacuum compatible.

It may come as a surprise, but keeping things cool or warm in vacuum chambers and in space is a proper challenge. Under ordinary circumstances, convection carries the majority of heat away from a warm object—this is why radiators are so good at keeping houses warm. In a vacuum, there is nothing to carry the heat. So, in the end, the only way to control temperature is through changing how efficiently heat is radiated from surfaces. And, now we have a material that can do this. I think that is probably the more important application.

Of course, we don’t know how physically robust the material is or how many emissivity transitions it can do before it stops working. But, assuming these pan out and that the ionic liquid is not too expensive or toxic, then I can imagine this turning up in specialist applications pretty quickly.