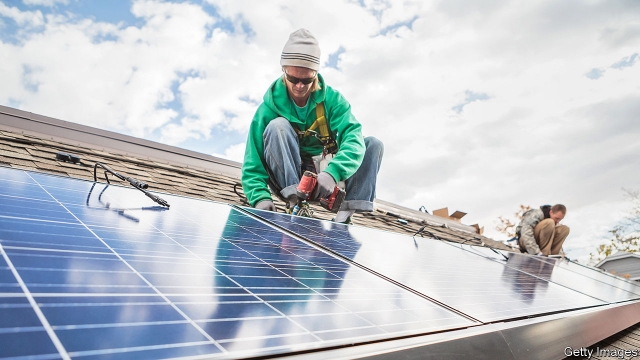 TEPCO, Japan’s largest energy firm, is an unlikely advocate of techno-anarchy. The firm is best known for the meltdown at its Fukushima Dai-ichi nuclear-power plant in 2011, during which its buttoned-down executives showed corporate Japan at its most stultified. Yet it is trying to reinvent itself as a pioneer of one of the edgiest forms of energy. It is embracing blockchain technology with an aim, no less, of overthrowing the old order in the electricity business to make it more decentralised.

Blockchains, the technologies on which bitcoin and other cryptocurrencies are built, may at first appear to be an uneasy fit with the energy business. Electricity has in the past been generated centrally, run across vast physical grids, with constant management by system operators to keep power flowing smoothly. Blockchains are distributed digital ledgers, which are not managed by a central authority, but collectively by a group of users. If anything, cryptocurrency blockchains are a drain on energy rather than a support for it. Digiconomist, a blog, estimates that just one bitcoin transaction uses as much electricity as an average household in the Netherlands uses in a month.

Yet in an era when more businesses, communities and households are generating their own energy, chiefly via solar and wind power, startups and big utilities alike believe blockchains will help speed the move towards decentralisation. They are finding ways to do this with minimal energy consumption.

There is lots of hype and a degree of heresy, given that stodgy utilities are making use of an anti-establishment technology. Almost all blockchain applications are still experimental. But the scope of potential blockchain-energy businesses is so wide that there may be successes to come. The applications range from ways to promote buying, selling or trading of clean energy between individuals (also called peer-to-peer trading), to balancing wholesale electricity markets (ensuring that supply always matches demand), to trading carbon credits. Further uses are enabling households to provide charging stations for electric cars, and funding the development of solar power in poor countries.

Numbers are hazy. The Energy Futures Initiative, a think-tank led by Ernest Moniz, a former American energy secretary, says that $100m-300m has been invested in over 100 blockchain-related energy ventures. Specialists at the Council on Foreign Relations (CFR), an American think-tank, say most investment so far has gone into peer-to-peer trading and grid-balancing applications. A “try-anything” attitude prevails. “It is like looking at cell phones circa 1995 and not knowing what the future of mobile communications will be,” says Sam Hartnett of the Energy Web Foundation (EWF), a non-profit venture aimed at developing core blockchain technology for the energy industry.

Tepco, for instance, appears to be throwing the digital equivalent of spaghetti at the wall to see what sticks. In December, it made an investment of an undisclosed sum in Electron, a British blockchain company that is focusing chiefly on handling the multiplying options for flexible demand in electricity systems. In April Electrify, a Singapore-based startup, said it had signed a memorandum of understanding with Tepco to experiment with peer-to-peer electricity trading. The Japanese group is also one of more than 70 firms, including utilities Duke Energy and Centrica, and oil firms Royal Dutch Shell and Equinor, that are part of the EWF. Among many initiatives, the EWF is pioneering a blockchain application that tracks renewable-energy certificates used to offset carbon emissions to make them more transparent and granular.

Experts say it is important to bust two myths—one too positive, the other too negative—about the blockchain and energy. First, there is a view, promoted in many initial coin offerings, that everyone will be able to use the blockchain and cryptocurrencies to trade locally-generated energy (rooftop solar, for instance) with each other, without a centralised utility in the middle. This is largely nonsense. Electricity still needs to travel down poles and wires, for which the transmission and distribution companies will want hard cash. The blockchain will be used, if at all, at either end of the grid.

On the negative side, a view prevails that the blockchain will guzzle too much electricity for energy applications to make sense. But this assumes that projects will use a public blockchain such as bitcoin, which anyone can access with the right software, requiring lots of computing power and time to verify each transaction and protect the blockchain. Energy firms could in fact employ blockchains in which only trusted participants can join, making the process of maintaining the blockchain faster and less energy-hungry.

Mr Harnett says that, while bitcoin transactions can consume the energy of a medium-sized country when done regularly, those of EWF are “of the order of a medium-sized office building”. The use of trusted pools of participants is where the utilities spy an opportunity to co-opt a potentially insurgent technology; they will use it to remain central to the decentralisation of electricity. “The [blockchain] ventures most likely to achieve commercial traction in the coming years will largely work within the existing system and partner with incumbents such as utilities,” says the CFR report. Or as Electrify’s Martin Lim colourfully puts it, “It’s ironic. Every subversive turns into a dictator.”