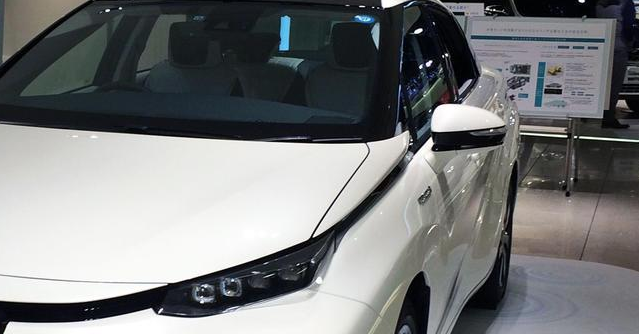 Toyota Motor Company is increasing its investment in hydrogen fuel cell vehicles (FCV). It is designing lower-cost, mass-market passenger cars and sport utility vehicles and even pushing the technology into trucks and buses to produce economies of scale.

Yoshikazu Tanaka, chief engineer of the Mirai said in an interview with Reuters: “We’re going to shift from limited production to mass production, reduce the amount of expensive materials like platinum used in FCV components, and make the system more compact and powerful.”

Many automakers and industry experts have mostly dismissed plans to expand the production of fuel cell vehicles (FCV) as being commercially unviable but Toyota hopes to prove them wrong. Toyota is busy cranking up improvements for its Miral hydrogen fuel cell vehicle expected to be released in the early 2020s. It has been around for some time as the appended photo shows.

The company also plans to introduce other models including SUVs, pick-up trucks, and commercial trucks beginning around 2025, a source with knowledge of the automaker’s plans said. However Toyota would not comment on its specific plans for the future. It has already developed prototypes of small delivery vans, and also large transport trucks.

Ikuo Ota, manager of the new business planning for fuel cell projects at Toyota said: “We are going to use as many parts from existing passenger cars and other models as possible in fuel cell trucks. Otherwise, we won’t see the benefits of mass production.”

Toyota hopes to increase the driving range of its next Mirai model to 700-750 kilometers from its present approximately 500 kilometers. By 2025 it hopes to hit 1,000 kilometers far beyond present electric vehicle ranges.

Toyota continues to believe in potential of FCVs

Toyota has a strong belief that within the next 100 years hydrogen will become a key source of clean energy. The company has been busy developing FCVs since early in the 1990’s. Hydrogen is the most abundant element and it also has the advantage of storing more energy than a battery of equivalent weight.

Production of Mirai has been quite limited

Mirai was world’s first production FCV launched way back in 2014. However, it costs around $60,000 prior to any government incentives. There is an acute lack of refueling infrastructure. Less than six thousand have been sold around the world.

Forecasts see sale of FCV’s to make up only 0.2 percent of world passenger car sales by 2027 whereas battery EVs are expected to be 11.7 percent. However Toyota is reported to think that the demand for the vehicles will strengthen as countries strongly committed to EV’s such as China warm to the advantages of the technology. The company also sees the development of FCVs as a hedge against the possible scarcity of key EV battery materials such as cobalt.

For now the Mirai is hand-built in Toyota city producing only a few models a day. However, the company expects sales to rise to about 30,000 units annually after 2020 from about 3,000 now. To lower production costs the company will need to produce other models.

The company is also reducing other costs. Eri Ichikawa a fuel cell engineer said: “We’ve been able to decrease the platinum loading by 10 percent to 20 percent and deliver the same performance.”

Wikipedia describes an FCV as follows: “A fuel cell vehicle (FCV) or fuel cell electric vehicle (FCEV) is a type of electric vehicle which uses a fuel cell, instead of a batt ery, or in combination with a battery or supercapacitor, to power its on-board electric motor. Fuel cells in vehicles generate electricity to power the motor, generally using oxygen from the air and compressed hydrogen. Most fuel cell vehicles are classified as zero-emissions vehicles that emit only water and heat. ”

Fuel cells are being developed and tested in trucks, buses, boats, motorcycles and bicycles, as well as other kinds of vehicles.

As of 2017 there is only limited infrastructure support for FCVs with only 36 hydrogen fueling stations available in the US. However, more are planned particularly in California. However there are stations in Japan, Europe and elsewhere with more being planned. However, some critics question whether the technology will ever be able to compete with other zero emission technologies.