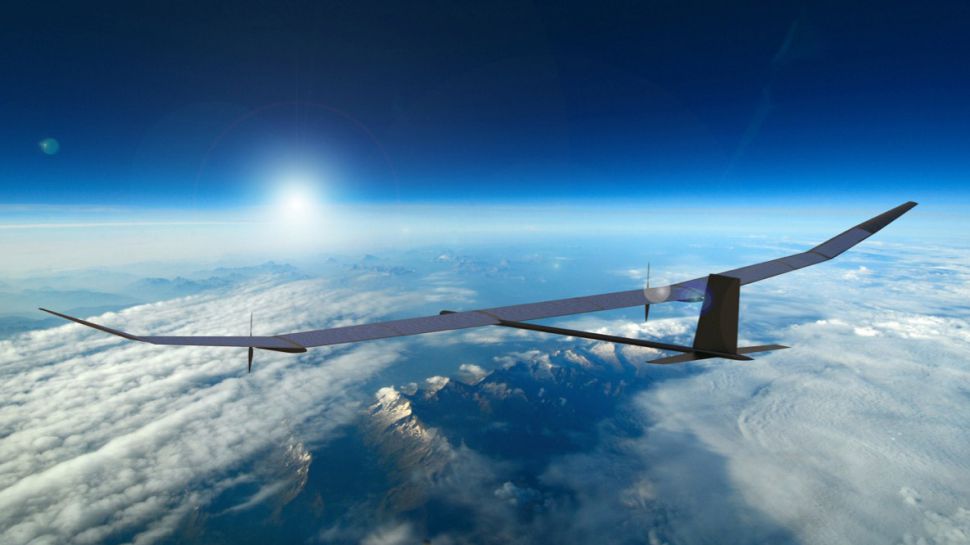 At the Farnborough International Airshow, a 35-meter wide black plane with wafer-thin wings is suspended on a wall beside an exhibit of BAE Systems’ cutting-edge space technology. This is PHASA-35 – a high-altitude, long endurance unmanned aerial vehicle (HALE UAV), and it could stay airborne for a whole year using nothing but solar power.

The drone on display at Farnborough is a scale model, but real test flights will take place next year and finished aircraft could be shipped to customers in 2020 or 2021.

The project is a collaboration between BAE Systems and Prismatic – a specialist in UAV systems and services.

“We want this to fly for as long as possible,” Jonathan Dixon, engineering director at Prismatic, told TechRadar. “For months, and eventually years.”

PHASA-35 will be able to carry a 15kg payload, and although it’s been widely described as a ‘spy drone’, its cargo could be anything.

“How far can you cast your mind?” said Martin Topping, international production developer at BAE Systems. “Essentially any payload that can fit within the capacity can be put inside it.

“That could be 5G and 6G communications, border surveillance, agriculture and forestry, famine relief – it’s infinite. The vehicle is the carrier – the transit van. Spying is quite a niche usage.”

PHASA-35 isn’t the only project that could bring internet access to areas not served by existing networks. “Airbus has a product called Zephyr that has already broken the world record in North America,” said Topping. “It’s a similar product, but doesn’t carry as heavy a payload. It will fly very high, and for an extended period of time, but that’s where the similarity ends.”

Airbus is building two Zephyr models for different sized payloads. The smaller, Zephyr S, is already in production, while the slightly larger Zephyr T is still in development. Zephyr S has set an endurance record of 14 days of uninterrupted flight.

Google’s parent company Alphabet is taking a different approach, using high-altitude helium balloons to tackle the problem. Project Loon’s balloons have a typical life of around 100 days, and Alphabet is currently in talks with telecom operators in Kenya to bring remote parts of the country online.

Facebook began developing a solar-powered drone, Aquila, in 2014. A prototype completed a 96-minute test flight in 2017, but in June 2018 Facebook shelved the project in favor of collaborating with dedicated aerospace companies.

“When we started the Aquila program back in 2014, very few companies were involved in this area,” Facebook’s Yael Maguire wrote in a blog post announcing the news.

“It’s been exciting to see leading companies in the aerospace industry start investing in this technology too – including the design and construction of new high-altitude aircraft. Given these developments, we’ve decided not to design or build our own aircraft any longer.”

BAE Systems and Prismatic are exploring different ways to market PHASA-35, including selling the drone itself, the drone together with a payload, or delivering it as a whole system. The drones are currently being made in UK, but customers could take manufacturing into their own countries.

The next steps for the project as a whole will be increasing the payload, and making the drone work in more locations.

“Solar-powered planes are great in the sunshine at the equator, but the focus will be on improving the performance of the planes, and making them work in more places around the world,” said Topping.

“You’re not going to get it flying at the North Pole in winter, but the further north and south it gets, the harder it is.”