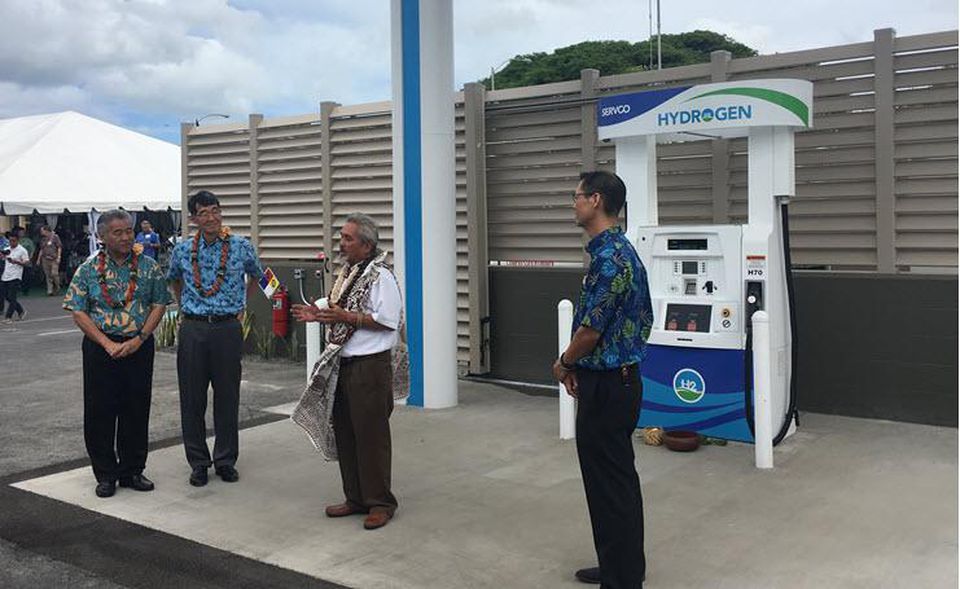 Last week, Honolulu-based Toyota dealer and distributor Servco Pacific unveiled the station by having Kahu Bruce Ah Leong bless it using Hawaiian Ti leaves and water from sacred waterfalls high in the mountains of Oahu after traditional Japanese Taiko drummers kicked off the ceremony. Servco, a local 100-year-old company that also owns dealerships in Australia and has commercial products distribution and private equity investments divisions, hopes that the availability of hydrogen to power passenger cars will spur sales of fuel cell vehicles (FCVs) on Oahu and eventually other Hawaiian Islands.

While the filling station will allow Servco to begin leasing Toyota’s Mirai FCV to its customers, in addition to other benefits such as easy and fast filling and long range, company chairman and CEO Mark Fukunaga hopes that the car’s freedom from imported fossil fuels will help Hawaii meet its ambitious renewable energy objectives.

“FCVs offer zero carbon emissions and zero compromise on refueling time and driving range,” Fukunaga said. “And our hydrogen station will help show Hawaii residents how FCVs can make a real impact on our sustainability goals.”

“Hawaii is the only state in the country committed to a 100% clean, renewable energy future,” Hawaii Governor David Ige said at the hydrogen station blessing ceremony. “In this past legislative session, we made a resolution to decarbonize our economy by 2045, and decarbonizing transportation is really the next step for our clean energy future.”

“I really do believe that the Mirai and hydrogen fuel cells have a part in our clean, renewable energy future,” Governor Ige added. “And I congratulate Servco for taking a step forward and putting a stake in the ground to our commitment to zero-emission transportation and making this facility a reality.”

The hydrogen station, located at Servco’s flagship Toyota dealership near Honolulu, can produce up to 12 kg of hydrogen per day and store up to 100 kg of hydrogen onsite, roughly enough to fill up 12 vehicles. Thor Toma, Servco senior vice president, pointed out that the hydrogen filling station was entirely funded by Servco.

“We didn’t get any funding from Toyota or grants from the state,” he said, “but we really believe that this is key for Hawaii. Hawaii doesn’t have any natural energy sources and we’re highly dependent on petroleum products. Hydrogen is something that can be produced locally through electrolyzing water, so it totally makes sense,” he added.

The Toyota Mirai, which has an EPA estimated range of 312 miles on a full tank, will be offered for lease by Servco at the end of this month and the lease includes service and hydrogen fuel. Like gassing up a traditional internal combustion engine, completely filling the Mirai’s fuel tank from empty takes approximately 5 minutes.

“The refueling process is as intuitive as learning to fuel a gasoline vehicle for the first time – and is fast,” Fukunaga said. The driver connects the fuel station’s nozzle to the car’s fuel receptacle. Once the two are locked in place, the station and car perform a system check, and when the tank is filled the dispenser stops the flow of fuel and can be disconnected from the car.

“It’s so difficult to say [FCVs] makes sense when you’re reading about it or looking at a picture,” Toma added. “Now that there’s a tangible example here people can see that this works and it’s safe, and that’s a critical piece to getting other public and private partnerships together to do more stations.”