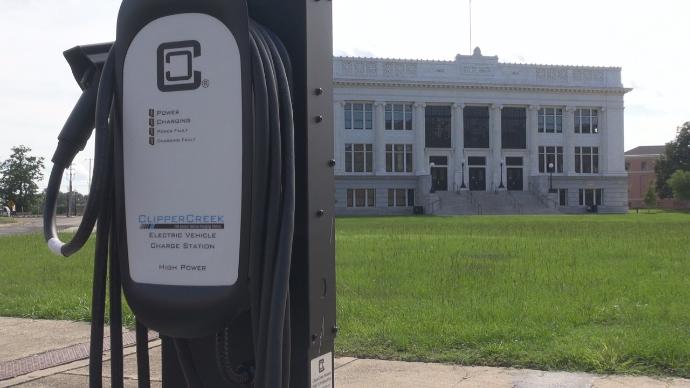 “Seeing more and more of the electronic cars around, people are getting more conscientious about how we can save energy. There are some definite benefits to having those types of cars,” says Laura Carmichael, Community Development Director for the city of Meridian.

“It’s good for us because it shows a lot of cities that have these downtown that Meridian is progressing,” says Meridian Mayor Percy Bland.

The average hybrid car takes about two or three hours just to charge. City officials believe having these chargers downtown will allow people to explore everything the city has to offer, while also charging their cars.

“We feel like we are going to have a lot more visitors with all the museums and things that are coming to downtown. We felt this would be a good opportunity to test and see whether or not this would be something that works for our city,” explains Carmichael.

So far, two chargers have been installed in downtown – one directly in front of City Hall and the other inside the parking garage.

“Those who are maybe coming to park for the day or driving to work, they can certainly use that and park and charge up while they are working,” says Carmichael.

“It’s just really fun and good to have it right downtown and right in front of City Hall,” says Bland.

There are also other chargers on private properties such as Bonita Lakes Mall.

These electric car chargers cost the city of Meridian no money to be installed. They were installed by Mississippi Power. The company is installing car chargers all over the state.