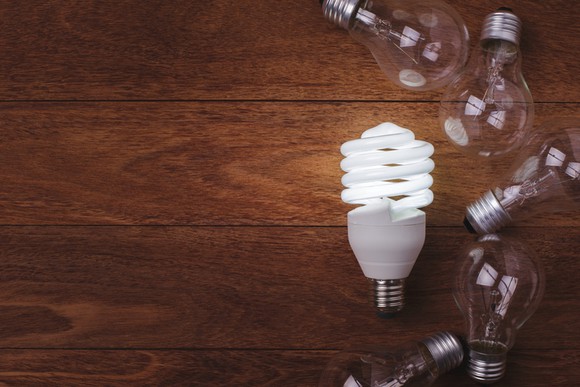 While utilities are eager to clean up the power sector, they’re realizing that will be a difficult task for renewables alone to accomplish. Consider that, because power and energy aren’t the same thing, it takes 2 gigawatts (GW) of solar or 1.4 GW of wind to replace the electricity generated from every 1 GW of retired coal-fired capacity. That gap will close as technology improves, but time is of the essence to meet carbon emission reductions outlined in the Paris Agreement.

That helps to explain why many utilities are turning to one of the most important, lowest-cost, and most often overlooked clean energy technologies available: energy efficiency. Long-term investors should pay close attention, as the compounding synergies realized from pairing renewables with energy efficiency could differentiate the best utilities stocks to own from the rest of the pack.

Energy efficiency is a great investment

According to the most recent annual report from the Consortium for Energy Efficiency, American electric utilities spent nearly $7 billion on energy efficiency programs for customers in 2016 and saved an estimated 25,788 gigawatt-hours (GWh) of electricity. That’s up markedly from just $1.6 billion spent in 2006 and was roughly equivalent to annual retail electricity consumption for the entire state of Connecticut.

So why would electric utilities, in the business of selling electricity, invest in reducing their market opportunity?

While it may seem counterintuitive, energy efficiency investments are actually largely driven by economics. That’s because when energy saved is considered an “energy source,” it’s by far the cheapest form of electricity, with levelized costs as low as $0.028 per kilowatt-hour (kWh). By comparison, the average American household pays $0.102 per kWh of electricity.

Energy efficiency programs are adding value elsewhere, too. For instance, energy efficiency lowers peak demand — the most expensive electricity to generate and deliver — during summer months, which makes it cheaper to replace a portion of coal-fired power plant retirements with efficiency efforts. As Duke Energy (NYSE:DUK) bluntly tells customers, “the cleanest, most efficient power plant is the one we never have to build.” To accomplish that goal, the company pays customers to make energy-conscious upgrades to their homes, including new HVAC systems (rebates of up to $525), water heaters (up to $325), and more. In fact, most major electric utilities (and gas utilities, too) have energy efficiency rebate programs for their customers.

Duke Energy has made energy efficiency programs a core piece of its long-term sustainability efforts. By 2030, the company aims to cumulatively save 22,000 GWh of electricity consumption in its network. That works out to 8.7% of the company’s total generation in 2017. Again, it’s all about reducing expenses and capital expenditures.

Energy efficiency efforts will play a major, albeit quiet, role in allowing Duke Energy to generate over 80% of its electricity from zero- and low-carbon energy sources by 2030. The math works out on a national level as well.

For instance, if the United States consumed 10% less electricity from fossil fuel sources in 2017, then renewables would have seen their share of the energy mix rise from 17% to 19%. It may seem insignificant, but it’s equivalent to an 11% increase — delivered without installing a single additional wind turbine or solar panel. Considering the long-term cost savings of wind and solar, which don’t have fuel expenses, utilities understand that energy efficiency will allow them to transition more of their generation mix to higher-margin production, faster.

Perhaps not surprisingly, there’s a general correlation between long-term total stock returns and energy efficiency and renewable energy programs. It was even stronger prior to the collapse of PG&E stock in late 2017, when it suspended its dividend to better manage regional risks from California wildfires.

If the cost savings from even more ambitious energy efficiency programs play out as expected, then this divergence in stock performance could widen in the next decade between those electric utilities taking the value proposition seriously and those that aren’t.

While it may be counterintuitive for a utility (in the business of selling electricity) to reduce its market opportunity, avoiding large up-front capital investments from building new power plants and transitioning a greater portion of energy generation to higher-margin production from renewables makes energy efficiency a great investment. The math — and stock performances — hints that this is an under-discussed trend that could play a big role in investing success.

Additionally, if you’re in the market for a new HVAC system, refrigerator, water heater, smart thermostat, pool pump, or other power-hungry appliance or system in your home, then you might want to check with your local electric utility to see if rebates are available. More likely than not, energy efficiency can be a great investment for your home, especially with free money available for purchases you’ll need to make anyway.