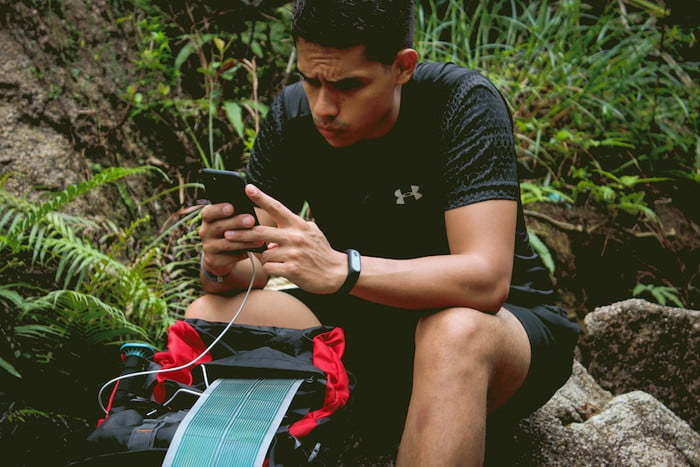 Small, portable solar panels have been a popular option for those wanting to keep their gadgets charged while traveling or backpacking. The problem with most of the solar-charging solutions that are currently available is that they tend to be big, bulky, and difficult to carry in a backpack. They’re often not all that efficient, offering theoretical charging times that are rarely achieved in the real world. But a new solar charging solution promises better results by using a clever design that allows it to take up less room in your pack while still offering plenty of juice to keep your gadgets functioning on the trail.

The Soul Solar Scroll launched on Kickstarter earlier this week and has already garnered nearly half the funding required to get it into production — and one look at its technical specifications and design makes it easy to understand why. The Solar Scroll is built to function as a lightweight, easy-to-carry charging solution for keeping mobile devices powered while on the go. It comes armed with a 5,400 mAh battery and a quick-charging USB port. Those features alone are enough to recharge a smartphone one or two times or a set of wireless headphones as many as 10 times.

But there are a lot of mobile charging solutions on the market today, some of which even come with built-in solar panels. What separates the Solar Scroll from the competition is that its solar panel is made of a very thin, flexible, and lightweight photovoltaic material that can be spread out to collect energy from the sun. When not in use, the solar panel can be rolled up – like a scroll – into the device’s housing, making it easy to carry with you wherever you go. Soul claims that the Solar Scroll is capable of producing as much as 5 watts of energy, which is enough to recharge its internal battery pack in as little as 5 or 6 hours using the sun alone. It can also be charged in just 2 to 3 hours if plugged into a wall outlet.

In its most compact state, the Solar Scroll is just 7.5 inches thick and 1.5 inches in diameter. It also weighs just 10.5 ounces, making it an ideal option for frequent travelers, hikers, or backpackers who need to keep their mobile devices charged while on the go. The battery is also reportedly good for more than a thousand cycles, which means you won’t have to replace it anytime soon.

The designers of the Solar Scroll are hoping to raise $30,000 to turn their innovative idea into an actual product. If successful, they hope to start shipping the charger in November of this year for $150. Early bird supporters can reserve one now for as little as $99 however, although it is important to realize the risks associated with backing any crowdfunding campaign.