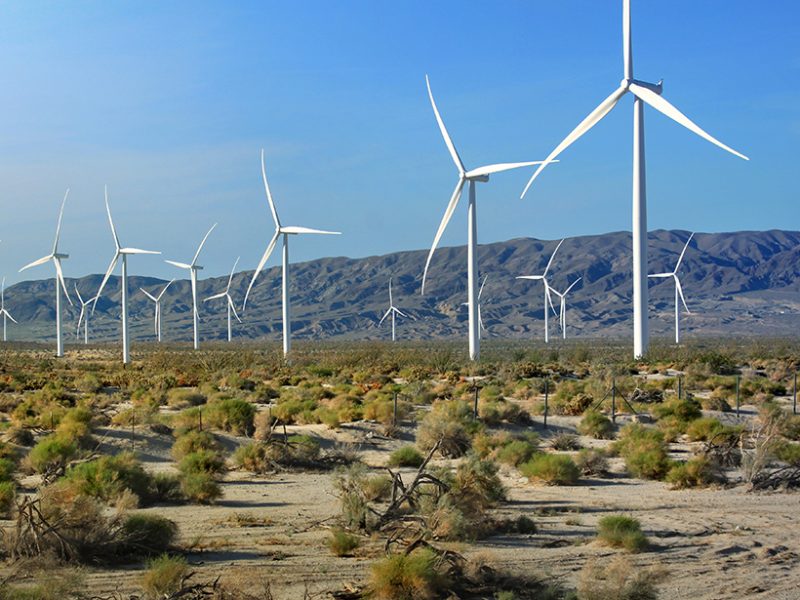 Renewable energy and energy efficiency are rapidly gaining ground in the United States, but their growth could be quicker with better policies in place. That’s according to a new report and a recent energy expo and policy forum.

The amount of solar power produced in America in 2017 was 39 times more than that produced in 2008, jumping from 0.05% of U.S. electricity to 2.1%, according to a 17 July report, “Renewables on the Rise 2018: A Decade of Progress Toward a Clean Energy Future.” The report was issued jointly by the Frontier Group, a Washington, D. C.–based think tank, and the Environment America Research and Policy Center, based in Denver, Colo.

The report notes several trends: America produced 4.6% more wind energy in 2017 than in 2008, with wind producing 6.9% of the country’s electricity compared with 1.5% in 2008. Energy efficiency increased, with the country using 1.1% less energy in 2017 than in 2008 despite adding 20 million people to the population. And utility-scale battery energy storage capacity grew 17-fold between 2008 and 2017, according to the report.
“Clean energy is sweeping across America and is poised for further dramatic growth in the years ahead,” in large part because of progress by states, local communities, and businesses, the report states. “Policymakers at all levels should adopt policies aimed at repowering America with clean, renewable energy.”

To continue that progress, the report calls for policy makers and community leaders to set goals to more rapidly meet all energy needs in all sectors with renewable energy, to work to ensure the rapid deployment of renewable energy, to support the development of relevant emerging technologies, and to set limits on greenhouse gas emissions.

Speakers at the 2018 Congressional Clean Energy Expo and Policy Forum, held on Capitol Hill on 10 July, also lauded strides made in renewable energy and energy efficiency. At the event, members of Congress and policy experts highlighted economic and environmental benefits of clean energy, and they called for more federal actions to support the industry, or at least not to tip the balance in favor of fossil fuels.

“We shouldn’t be focusing our efforts on propping up legacy energy systems that are dirty and no longer economically viable,” Rep. Matt Cartwright (D-Pa.) said. He was one of a handful of members of Congress at the event, which was sponsored by the Environmental and Energy Study Institute (EESI) and the Sustainable Energy Coalition, with the bipartisan House Renewable Energy and Energy Efficiency Caucuses serving as honorary cohosts.

Cartwright said that solving energy challenges requires cooperation between Congress, the renewable energy industry, and other interested parties. However, he added that “Congress has not been holding our end of the bargain up” and that Congress should “clear hurdles, provide certainty and incentives, and provide the necessary funding for research.”

Rep. Paul Tonko (D-N.Y.) also stressed that the federal government needs to be a partner in making progress in renewable energy, and he lamented the administration’s plan to withdraw from the Paris climate accord.

“If we’ve abandoned this national commitment via the Paris accord, then do not let us interrupt the markets and subsidize power that is inefficient or polluting. Let’s not choose players here and reward them via payments that will subsidize and distort the market,” said Tonko, cochair of the House’s Sustainable Energy and Environment Coalition.

An Issue That Reaches Across Party Lines

Tonko added that support for renewable energy “is becoming more and more bipartisan, as it should. None of us are escaping the impact of carbon pollution and greenhouse gases. Many of us want to add jobs to the economy, and significantly paying jobs at that. And none of us wants to destroy the health and well-being of our constituents.”

“This isn’t about Republicans. This isn’t about Democrats. This is about our planet and how to move our economy and our country forward,” Sen. Dean Heller (R-Nev.) said about renewable energy, noting that about 30,000 people in his state work in industries related to solar, wind, and other clean power sources. Heller said that he is working with other senators to try to reverse a tariff of up to 30% that the administration recently placed on imported solar equipment. Heller is a cosponsor, with other Republicans as well as with Democrats, of the Public Land Renewable Energy Development Act (S.282).

Drawing the Connection Between Renewable Energy, Jobs, and National Security

Renewable energy and energy efficiency are “not just about something aesthetic; this is really about jobs,” Sen. Jack Reed (D-R.I.) said. “Those are the jobs of the future, and we’ve got to make sure they are available for the next generation of working America.”

He also said that renewable energy is “a national security priority” that “goes to the basic level of protecting our forces in the field.” Reed, the senior Democrat on the Senate Armed Services Committee, said that it is dangerous to truck in tons of gasoline to U.S. troops in the field and that it impairs their mission.
Reed urged that the Department of Defense’s goal of having all of their operations using 25% renewable energy by 2025 should be reached sooner and should be more than 25%. “It’s for our national security and the men and women who serve,” he said. “We owe them that much.”