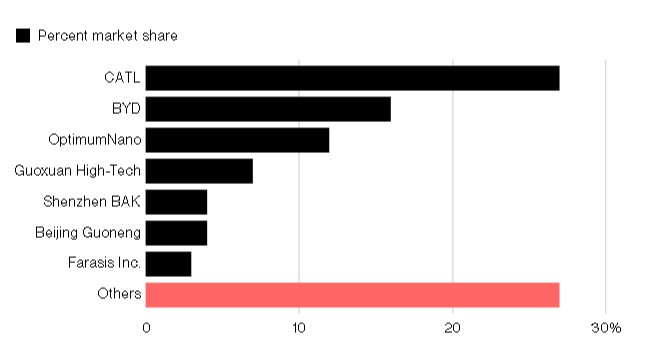 China’s electric-vehicle battery sector is set for a brutal reshuffle as the government reforms subsidies to meet the more exacting technological demands of next-generation transport, according to Sanford C. Bernstein & Co.

China built massive new battery capacity in recent years, aided by generous government support, creating industry heavyweights Contemporary Amperex Technology Ltd. and the Warren Buffett-backed BYD Co. Of more than 25 producers examined by Bernstein, only those two are operating at sufficient scale, and with the best technology, people and products, to have a secure future, according to the broker.

“This has been a heavily subsidized market in which the government has thrown money at everything and everybody that wants to give it a try,” Mark Newman, Bernstein’s lead global analyst for batteries, energy storage and electric vehicles, said in a July 9 phone interview. “Now they’re trying to wean them off, and you’re starting to see who is a worthy battery maker that can actually survive.”

The government’s plans to scale back aid to vehicle manufacturers is poised to reshape the industry’s landscape. In the wake of the latest subsidies that took effect last month, China will step up development of longer-range electric vehicles, requiring larger batteries with higher energy-density, that are much more complex to develop and mass produce.