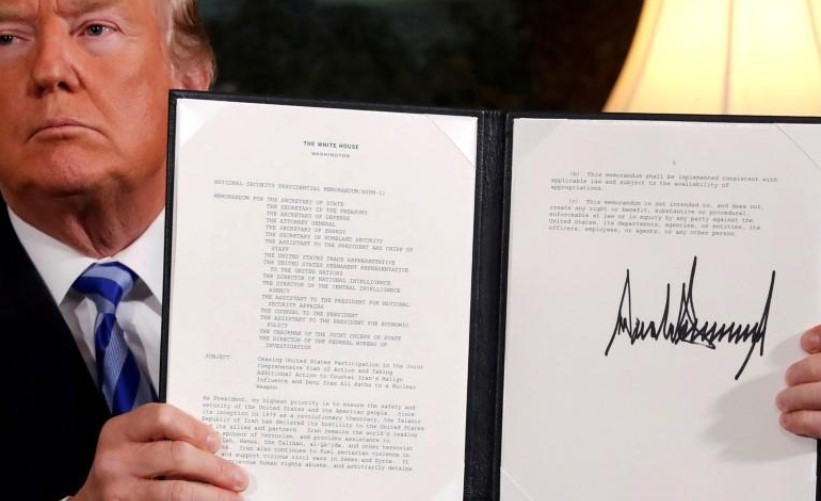 Russia and Kazakhstan are cutting back sales of hot-rolled steel coils to Iran in part because of new U.S. sanctions on Tehran, steel traders said.

The development shows that, despite protests from the Kremlin that unilateral U.S. sanctions should not affect Russian companies, the firms are changing their behavior for fear of falling foul of U.S. sanctions.

Imports of Russian and Kazakh hot-rolled steel coils – used in industries from pipes to cars to agricultural equipment – make up only a small part of Iranian consumption, and can be replaced. The imports were already slowing before sanctions because of low prices and weak demand.

But the U.S. sanctions have accelerated the slowdown, traders said.

The coils are shipped to Iran by Russian steelmakers Severstal and MMK along with ArcelorMittal’s plant in Temirtau, Kazakhstan.

“I believe that Arcelor and the likes are cutting trade with Iran because of (U.S. President) Donald Trump’s pressure on big companies,” an Iranian trader said.

Alex Agoureev, an adviser to Paramjit Kahlon, CEO of ArcelorMittal CIS, confirmed that the company plans to suspend supplies to Iran due to the U.S. sanctions. ArcelorMittal is the world’s top steel producer.

“Supplies to Iran will be temporarily suspended due to the sanctions. Once sanctions are lifted, the supplies will be resumed,” Agoureev said.

He did not say when the suspension would happen or provide further details.

In May, Trump pulled the United States out of an international nuclear deal with Iran and promised to reimpose U.S. economic sanctions on Iran to undermine “a horrible one-sided deal that should have never, ever been made.”

As a result, a number of European energy and financial groups have said they will end projects in Iran or suspend dealings with the country.

U.S. measures due to kick in after a 90-day “wind-down” period ends on Aug. 6 include sanctions on the purchase or acquisition of U.S. dollars by the Iranian government, on Iran’s trade in gold and precious metals, and on the sale, supply and transfer to or from Iran of graphite, raw or semi-finished metals, coal and industrial-related software.

Russia and European Union states opposed the U.S. withdrawal from the deal. Russian President Vladimir Putin and French leader Emmanuel Macron have both said they will resist any move by the U.S. authorities to punish Russian or French companies for doing business with Iran.

In a speech in May, Putin referred to U.S. laws being used to force non-U.S. companies to pay fines. “We need to put an end to this. It’s not acceptable,” he said.

However, business executives have to confront the reality that many of their transactions are in dollars, which means they are exposed to U.S. jurisdiction. That makes it risky for them to ignore U.S. sanctions.

Despite a promise by Macron to protect French business interests from any fallout from U.S. sanctions on Iran, French oil major Total announced it may pull out of Iran unless it secures a waiver from the sanctions.

According to CRU, a market intelligence group specializing in metals, mining and fertilisers, Iran’s net hot-rolled (HR) coil consumption was 5.6 million tonnes in 2017, of which 0.8 million tonnes were imported.

Of that, Russia supplied a total of 410,000 tonnes and another 240,000 tonnes were shipped from Kazakhstan. Their sales mostly consisted of hot-rolled coil less than 2mm thick which was not produced in Iran at a time, according to CRU.

Puneet Paliwal, a senior analyst with CRU, said that the cut in imports should not have a big effect on Iran, where the less than 2mm thick HR coil is used in the pipes and profiles segment, a large steel end-use sector in the country.

In June, the state-owned Mobarakeh Steel Company (MSC) began commercial production of 1.8mm HR coil, “which will substantially reduce import dependence of the country for the less than 2mm thick HR coil.”

“The company claims that it will ramp up production to completely substitute imports within an year,” Paliwal said.

“Thus, imposition of trade barriers (both Iran import tariffs and U.S. sanctions), alongside fresh domestic production in Iran, is likely to result in a sharp reduction in HR coil imports from the CIS nations.”

Bahadour Ahramian, a board member of the Iranian Steel Producers’ Association, said it was largely expected – even before the U.S. decision to re-install the curbs – that Iran’s imports would fall this year thanks to the new MSC mill.

“Exports might be hit by the sanctions, perhaps that’s (more so) something to watch,” said Ahramian.