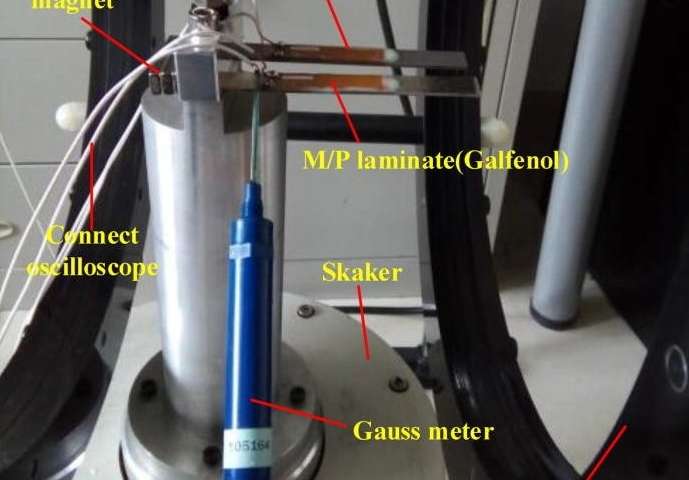 A new hybrid energy-harvesting device may one day replace the need for batteries in certain low-power electronics devices. The new device collects ambient wasted energy from both mechanical vibrations and magnetic fields to generate sustainable electricity, which could potentially provide enough power to run wireless sensors, cardio pacemakers, and other applications.

The researchers, led by Fulei Chu at Tsinghua University in Beijing, have published a paper on the new hybrid energy harvesting device in a recent issue of Applied Physics Letters.

Over the past several years, energy harvesting has become an increasingly attractive option for replacing the batteries that are used in low-power devices. Whereas batteries have a limited lifetime and must be replaced or recharged on a regular basis, energy-harvesting devices can ideally operate autonomously for much longer periods of time.

One of the greatest challenges facing energy harvesters is generating enough power for practical applications. One way to increase the output power is to harvest more than one type of energy. For example, although there are a variety of devices that harvest either mechanical energy or magnetic energy, very few devices can harvest both, despite the fact that ambient mechanical and magnetic energy often appear together in industrial settings, such as near rotating electrical machines.

In the new study, the researchers showed that mechanical and magnetic energy are “interactive,” so that, when combined, they increase the optimal output power above the level that is possible using each type of energy alone. They demonstrated the improvements both theoretically and experimentally using a cantilever beam made of a magnetostrictive/pieozoelectric laminate material, which moves in response to both magnetic fields and vibrations.

“We have proposed the idea of taking advantage of two different energy harvester approaches and showing their interactions,” Chu told Phys.org. “As we know, energy harvesters have been investigated for decades and many methods are involved. However, each approach has its shortcomings. It is difficult and interesting to break through the single energy harvester limitations. Moreover, revealing the interactive relationship is important for the work as a whole.”

With these insights, the researchers demonstrated improvements in the energy capacity, reliability, and optimal output power of the hybrid energy-harvesting device. Overall, they believe that the device performance suggests that the hybrid approach offers a promising alternative for powering low-power electronics in the future.

“We plan to conduct deeper research in the energy harvester field in the future,” Chu said. “Wind energy, wave energy, and more smart material applications in energy systems will be the focus of our research besides the further investigations of this paper.”