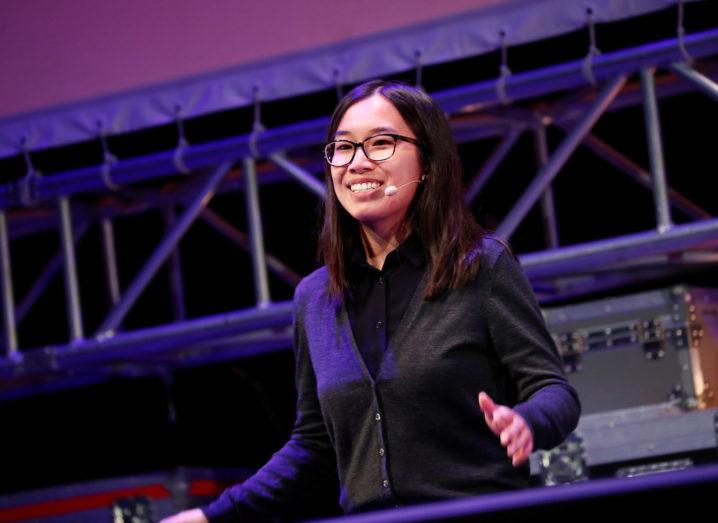 An innovative and simple solar panel efficiency device has just gone open source in order to get renewable energy to those who need it most.

When you picture solar power, you might tend to think of the enormous Ivanpah solar power plant in California, the largest in the world, or large tracts of land in other sun-drenched parts of the world.

But not everyone has access to such enormous grids and, in particular remote villages in developing nations, there is only a need for a single or small group of solar panels that could maintain maximum efficiency to sustain a family or village.

This is exactly what inspired Inspirefest 2018 speaker and software/mechanical engineer Eden Full Goh to develop her SunSaluter device that she announced on stage as being open source for anyone to build.

Her original idea aimed to tackle one of solar energy’s biggest problems: having a solar panel pointing directly at the sun at all times, otherwise known as solar tracking.

As the Earth rotates, the sun’s position in the sky above changes meaning that while at one point the panel will be pointed directly at it around midday, in the morning and evening it is out of direct sunlight and leaving those who need it receiving limited power.

But unlike the solar panels you might find at Ivanpah, Full Goh wanted to make a moveable solar panel that could be easily put together.

A device for all

After a trip to east Africa to test the prototype SunSaluter, she quickly learned that the challenge at hand was greater than she first thought, with those in one village saying the parts were not readily available there and that it could be dangerous to local children playing nearby.

“I decided to spend the rest of my trip learning about them,” she said on stage. “If these complicated metal parts weren’t available to them, what would be?”

So then a brainwave hit the Chinese-Canadian inventor: what if she could hit two birds with one stone and create both a device that could harness more solar energy but also create potable drinking water?

What resulted was the final SunSaluter device that is now capable of giving energy and safe water to those who need it the most, and she announced on stage that while it was originally patented, it will now be made open source for anyone to build.