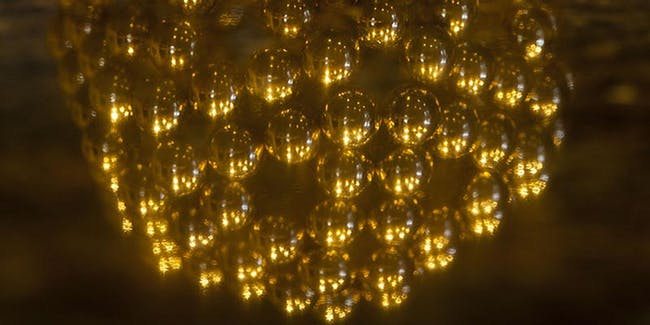 Spiky, nanoscale gold spheres, similar in shape to a pufferfish — and powered by nothing more than sunlight — have successfully split water into the oxygen and hydrogen needed for fuel cells. If scaleable, the new technology could lead to harvesting methods for solar energy that would be easier to store for later use, allowing it to meet the fluctuations in energy demand that have thus far plagued renewable energy technologies like solar and wind.

The tiny gold balls are coated with an ultra-thin layer of titanium oxide that acts as a catalyst on the water molecules. First, infrared and visible sunlight get converted to electrons by the gold, and then those highly concentrated electrons are delivered into the titanium layer to split water into hydrogen gas and oxygen. Prior to this method, the process could only be done with ultraviolet light acting on bulkier, inefficient titanium and gold catalysts.

“To generate this UV light, to then expose to the catalyst, it’s costly,” Laura Fabris, a materials science engineer at Rutgers University in New Brunswick, tells Inverse. “On the other hand if you want to illuminate it with sunlight, it’s just inefficient — it’s only 5 percent of the sunlight.”

Fabris’ research, published today in the journal Chem, resolves this issue by specifically designing the shape, or morphology, of the titanium-coated gold nanoparticles to pick up a broader range of wavelengths within sunlight.

“If you expand to infrared or even to parts of the visible spectrum by tweaking the morphology then you have a much more efficient, low-cost process that has a lower footprint on the environment,” she says.

The particles needed to be spiky for two reasons. First, because the spikes served as good antennae for near-infrared radiation, which is a broad part of the solar spectrum. The other reason, she explained, is that the spikes allowed researchers to direct a high volume of electrons toward their pointed tips, making it easier for the electrons to migrate into the titanium.

Fabris says that she and her team have already tested them at a large batch level. Imagine something like a vat of these gold nanospheres being constantly stirred in water so that every part of their surface is in frequent contact with water molecules and the sun’s rays.

But they are also testing out more shapes for these, in the hopes of finding some that absorb even more of the solar radiation spectrum.

“We have another shape of particle,” according to Fabris, “that has six or seven tips, only, and we can tune the length of these tips from 70 to 100 nanometers, which is great.”

“You could, in principle, create a material that absorbs all sunlight.”

A material that absorbs all sunlight would be far, far more efficient than the ones we have now, which can only absorb the 5 percent that comprises the UV portion of the spectrum — or even, really, these new gold nanospheres which can absorb some light from the 55 percent of sunlight that comprises the infrared spectrum and the remaining 43 percent that is visible light. The team’s paper today in Chem reports that there was a 7-fold increase in hyrdogen production over the older, UV-only catalyst. In short, these little gold balls could really get things rolling (wince) towards a more secure energy future.