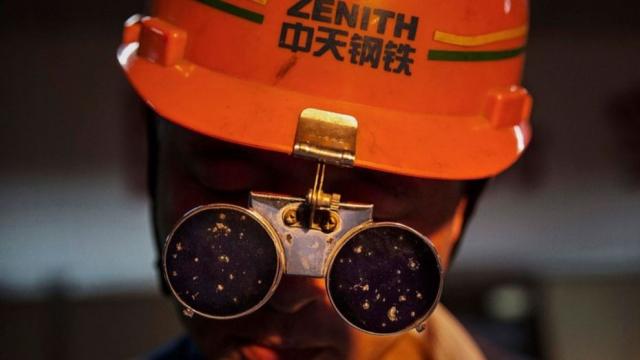 Nearly 35 million net tons of steel were imported into the United States last year. That’s more than 100,000 tons a day. Imagine one-and-a-half Ford-class aircraft carriers sailing into America every day. That’s how much steel is coming in from foreign countries.

In recent weeks, there has been much debate about President Trump’s use of tariffs and quotas to address unfair steel imports. President Trump’s actions were necessary because numerous countries use a host of subsidies and dump steel exports all over the world.

In the U.S., imports took 27 percent of the market for finished steel products last year. That is the third highest market share on record, according to our data at the American Iron and Steel Institute (AISI) and the U.S. Census.

Global steel overcapacity has fueled this surge in imports, which has resulted in steel plants shutting down and jobs lost. And China is the biggest culprit. China produces half the world’s steel and has increased its capacity by some 600 percent since 2000.

For example, China last year announced that it was closing 140 million metric tons of induction furnace capacity that had never even been included in any official capacity reports.

While direct imports from China have been reduced in recent years — in part due to several successful trade cases brought by the steel industry — high Chinese steel production and exports to third countries continue to threaten the U.S. industry’s health and ultimately our national security.

Unlike in the U.S., where companies exist to make a profit, state-owned companies in China and elsewhere primarily exist to employ people. As a result, they produce massive amounts of steel that is unused in their domestic markets and then dumped all around the world.

In some cases, those exports force other countries to export their own steel production that would normally be used domestically. In other cases, the steel that originates in China is trans-shipped through another country or further processed in another country before being exported to the U.S.

For example, Chinese billets are being further processed in Turkey into long products, which are then exported to the United States, while Chinese flat-rolled steel is being converted into pipe products in Korea, which are then, according to Commerce Department determinations, being dumped into the U.S. market.

There have been several attempts to address state-owned companies subsidizing their steel products and dumping them. President Obama created the Global Forum on Steel Excess Capacity to get all of the major steel-producing countries in a room together to try to find policy solutions.

This proved to be fruitless, as China spent more than a year refusing to even provide data about the fundamental problem, let alone giving any indications that it was serious about necessary reforms.

In addition, in the last Congress, the trade laws were strengthened to address foreign companies illegally bypassing antidumping and countervailing duty laws. But this also failed to solve the problem, as China responded to high U.S. duties by exporting large amounts of subsidized steel to third markets.

Given these past unsuccessful attempts to solve the problem and with the industry suffering, President Trump initiated an investigation under Section 232 of the Trade Expansion Act of 1962, with the Commerce Department ultimately finding that steel is both critical for national security and that the sustained flood of subsidized imports was threatening the industry.

Since neither negotiations nor targeted responses successfully solved the problem, President Trump implemented a more comprehensive remedy, imposing quotas or tariffs on most of our trading partners.

We’re just beginning to see the positive results of the president’s actions — domestic production is increasing, steel companies are investing more in communities throughout the country and steel jobs are being added for the first time in years.

Now some in Congress want to undermine Section 232 with no back-up plan for how to address the underlying problem. That is shortsighted and must be stopped. We applaud Sen. Sherrod Brown (D-Ohio) and other senators who are working to block these misguided attempts.

The president’s actions should be given time to work, while the administration continues to have discussions with our North American Free Trade Agreement (NAFTA) partners and others on rebalancing our trade relationships.