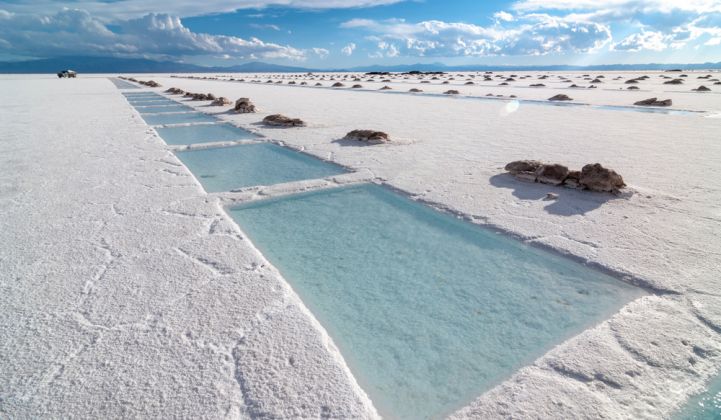 The surging electric vehicle market is driving the lithium industry into volatility as it confronts unprecedented demand growth.

Pricing for the battery essential lithium has tripled from $5,000 per ton to up to $15,000 per ton as industry players jockey for mining resources and capital. Lithium now accounts for about 10 percent of the cost of making a battery cell, according to David Snydacker, CEO of lithium extraction startup Lilac Solutions.

Global battery-making capacity is set to double by 2021 to more than 278 gigawatt-hours per year, according to Bloomberg New Energy Finance. Global demand for lithium is expected to quadruple by 2025. EVs have surpassed consumer electronics as the biggest users of lithium-ion batteries, according to consulting firm Avicenne Energy.

It’s obvious that the battery industry is going to need a lot more lithium, sourced from either the mineral spodumene or from brine pools. There are plenty of lithium reserves, but it takes six to 10 years to set up a new mine, while a battery factory can be brought online in two years.

“Historically, lithium has been a small specialty chemical market that hasn’t received much attention or innovation,” said Snydacker. But the lithium industry is changing quickly as suppliers struggle to keep pace with the steep growth in EVs.

Snydacker’s startup aims to halve the cost of the lithium material used in EV batteries — supplying battery-grade lithium hydroxide at a cost below $3,000 per ton.

The CEO argues that the EV market has driven the battery industry to such scale and throughput that much of the manufacturing cost has already been squeezed out, and we’re starting to bump up against the cost of materials. Raw materials account for 50 percent to 70 percent of the cost of lithium battery cells, according to Avicenne.

“Costs may fall to as low as $80 per kilowatt-hour, but beyond that you’re looking at lithium and other raw materials,” said Snydacker.

Far removed from shiny EV showrooms lie the sources of lithium — either desert brine pools or deposits of the mineral spodumene. The highest-quality lithium brine pools are in Chile’s Atacama Desert, known to the photovoltaic industry as also having the world’s best solar resource. Today, most spodumene comes from Western Australia, followed by China.

The U.S. hard rock lithium industry lost its dominance to Chilean brine resources in the 1990s. But higher pricing is ushering in the revival of mining operations in North Carolina, Utah, California and Arkansas. The U.S. mined just 2 percent of the world’s lithium in 2017, from a lone Nevada mine, according to mining.com.

Capacity forecasts for the industry are all over the map. Morgan Stanley expects a brine and hard rock supply glut by 2021, along with a 45 percent fall in price. Mining executives disagree with Morgan Stanley, citing the potential for processing bottlenecks and the complexity of lithium mining. Roskill anticipates the market for battery-grade lithium materials to continue to be tight. Canaccord Genuity expects a flood of new supply coming to market, while warning of the gap between supply forecasts and reality. Wood Mackenzie sees brines becoming the dominant resource.

According to Snydacker, conventional extraction of lithium from brine resources is based on evaporation ponds that are expensive to build, slow to startup, and difficult to manage. He adds that 99.9 percent of the brine consists of water and other low-grade salts (mostly sodium). Processing requires huge quantities of water and truckloads of chemicals to knock out the magnesium.

“Everything else has to be removed before only a lithium chloride solution remains,” he said. Lithium extraction technologies based on membranes and alumina absorbents have been developed by FMC and others. MGX Minerals, based in Canada, has been testing specialized membranes that sift lithium from wastewater.

GTM’s Emma Foehringer Merchant has written about the water requirements (as much as half a million gallons per ton) of extracting lithium from brines, usually in drought-ridden deserts. She notes that lithium-based batteries also require raw materials like cobalt, nickel and graphite, “which further complicate the supply chain.”

Lilac and its four employees have raised an $800,000 seed round and are on the way to raising an additional $1.5 million. Lilac aims to be a mining tech company that works with lithium brine developers — building, designing and operating the ion exchange unit for lithium extraction. Snydacker said that there are dozens of lithium resource developers in the U.S., Argentina and Chile that know where to find the brine. “What they’re missing is the extraction piece,” he said.

Conventional lithium-ion technologies are booming. The CEO noted that there are scores of battery startups, but they’re looking to compete with the likes of LG, Panasonic and Samsung.

“Their prospects are extremely daunting,” said Snydacker. “That’s why we’re betting on the success of the lithium market.”