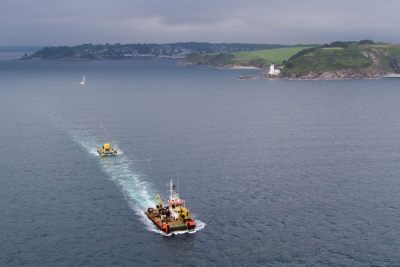 An innovative wave energy device has gone into testing off the choppy waters of England’s south-west coast.

WaveSub, which have been developed by Marine Power Systems (MPS) in south Wales, was towed over 169 miles of open water this week.

The final journey to install the device at the FaBtest centre in Falmouth follows a decade of research and development. The innovative renewable device measures 100 metres long and at 5 megawatts can power around 5,000 households.

WaveSub will now be subjected to a series of rigorous tests to work out its long-term viability to provide clean electricity in all-weather and sea conditions.

Dr Graham Foster, Chief Technology Officer at MPS commented: “The successful installation of the WaveSub at FaBTest is another positive result for us, sitting within a suite of tests we have been running on the WaveSub over the first half of this year. We will now focus our attention on moving the WaveSub through final commissioning with a view to commencing energy generation trials later this summer.”

Support for the project has been provided by the Welsh Government and the European Union.

A report earlier this year concluded that wave energy could generate £4 billion to the UK economy and create 8,000 jobs out to 2040. However, wave energy remains at an earlier stage of development than tidal and has seen a number of businesses exit the market.

Dr Gareth Stockman, CEO of MPS struck an optimistic tone about the future of wave power in the UK, commenting that the country’s wave sector is “world leading”.

“MPS believe that with continued support and investment, wave energy can grow to become a new source of low carbon power as well as being a significant contributor to the UK’s fast-growing renewables economy.”