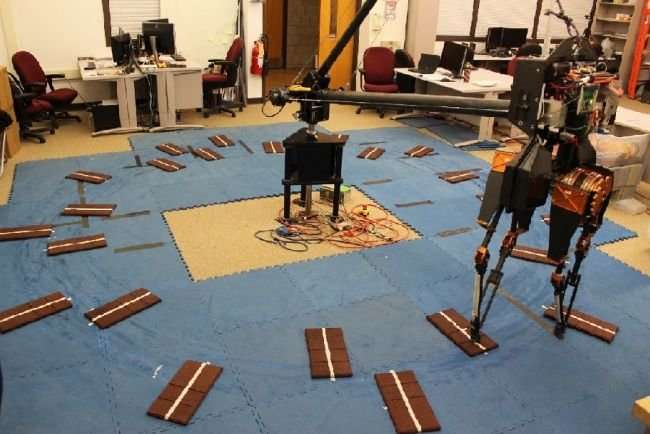 If bipedal robots are expected to successfully carry out intended tasks of search and rescue and disaster relief, then scientists and engineers will have to watch the robots’ steps. It is built into the situation that the bipedal robots will have to move the operation along without tripping and falling in hazardous terrain.

Writing in IEEE Spectrum this month, two researchers in the frontlines of bipedal walking research give us a glimpse on what the challenge is really like to get robots to walk on tough terrain where they must step up, step down, stay on balance, without fail.

Make no mistake, they added, the challenge remains real. “Current state-of-the-art robots are slow with quasi-static motions, not robust to unexpected disturbances and are inefficient in terms of their energy usage.”

Ayush Agrawal and Quan Nguyen are from UC Berkeley and Carnegie Mellon. They explained why it’s tough. They wrote, “designing control algorithms that can handle discrete footholds (like rubble or stepping stones) is challenging, because there are strict constraints on foot placement that can’t be violated and the motion of these systems are governed by complex dynamical equations.”

They also commented on how the robots manage to move. “Moreover, these robots do not ‘know’ what the terrain will be like ahead of time; only the next step location is shown to the robot, a scenario that closely represents what a robot might encounter in the real world.”

The two and their Hybrid Robotics Group at UC Berkeley and CMU team appear to be on to next steps in “optimal and nonlinear control systems.”

According to the summing up of Luke Dormehl, Digital Trends: A team of researchers at the University of California, Berkeley, and Carnegie Mellon University, including Professor Koushil Sreenath, Ayush Agrawal, and Quan Nguyen, have developed control algorithms that allow an ATRIAS robot to dynamically and swiftly walk over random terrain of stepping stones.

The paper “Dynamic Walking on Randomly-Varying Discrete Terrain with One-step Preview” explores “2-step periodic gait optimization.” It enables the team to handle a wide change in footstep placement of a robot.

The two said they have been working on “developing formal control frameworks for high degree-of-freedom bipedal robots that not only guarantee precise footstep placement over discrete terrain, but are also robust to model uncertainties and external forces.”

The team used an underactuated (no actuators at the ankle, just fixed-point feet) bipedal robot under different types of terrain. This is an ATRIAS robot—a practical choice in that the robots can test out locomotion.

The ATRIAS site page calls attention to the carbon-fiber leg mechanism as lightweight, and softening each footfall instead of sending large jolts to the body.

Backed by some “neat math,” Agrawal and Nguyen said their robots can walk over discrete terrain without slipping or falling over.

The robots get the movements right in stepping on and off the stepping stones. They have been able to achieve “precise footstep placement over stepping stones,” Agarwahl told Digital Trends, “with varying step lengths and step heights, on a human scale bipedal robot.”

Agarwahl and Nguyen stated in IEEE Spectrum that “We believe that this is the first time that dynamic walking on stepping stones with simultaneous variation in step length and step height has been successfully demonstrated on a bipedal robot.”

The robots are currently “blind,” said John Biggs in TechCrunch; the researchers will look into combining this work with computer vision research.

“With a new robot, Cassie, soon to arrive at Berkeley,” said the two in IEEE Spectrum, “we plan to extend our experimental results to 3D walking over real-world stepping-stones.”