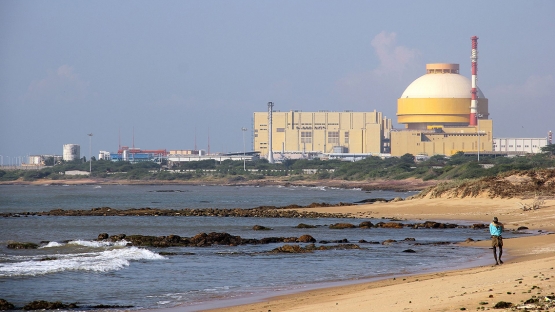 Non-electric applications powered by nuclear energy offer increased energy efficiency and represent sustainable solutions for a number of energy challenges current and future generations will have to face. There is growing interest in increasing nuclear energy efficiency by using heat and other forms of energy generated by nuclear power plants as a by-product for seawater desalination, hydrogen production, district heating and various industrial applications. At a meeting at the IAEA last week, experts reviewed the status of harnessing this energy that would otherwise go to waste and dissipate as heat.

“Cogeneration could increase the overall thermal efficiency of a nuclear power plant by more than 30% by reusing waste heat and could decrease the environmental impact of heating and transport by up to 35%,” said IAEA Senior Nuclear Engineer Ibrahim Khamis.

Nuclear power plants produce a large amount of both electricity and heat. Cogeneration merges the production of usable heat and electricity into a single process that can substantially reduce carbon emissions and energy costs. It is a more efficient use of fuel because otherwise wasted heat from electricity generation is put to productive use in district heating, desalination or hydrogen production.

Currently there are more than 70 nuclear power plants operating in cogeneration mode and the potential for applying this technology more widely appears promising, Khamis said.

For more than two decades, the support for seawater desalination using nuclear energy has been repeatedly stressed at the IAEA General Conference and supported by many Member States. Nuclear desalination has been demonstrated to be a viable option to meet the growing demand for drinking water around the globe, including areas in arid and semi-arid zones that face acute water shortages, Khamis said.

Reactors in Japan, India and Kazakhstan have gathered over 200 reactor years of experience in desalination, and have demonstrated it as a viable option.

Better water management not only means introducing nuclear desalination applications, but also more efficient practices in the use of the water supply needed to run power plants.

“Economizing water and the efficient use of water resources in Jordan is a challenge for the success of the Jordanian nuclear power plant project,” said Sameh Melhem, engineer at the Jordan Atomic Energy Commission. “The proposed site for the plant is located far away from any sea or river. Therefore, it is important for us to discuss technical, economic, and environmental aspects of water management, in forums such as IAEA technical meetings.”

In support of the SDGs

“The technological advances and interest in non-electric applications not only fulfil our IAEA mandate but such activities are in line with United Nations Sustainable Development Goals (SDGs),” said Mikhail Chudakov, IAEA Deputy Director General and Head of the Department of Nuclear Energy. Cogeneration is relevant for the following SDGs: