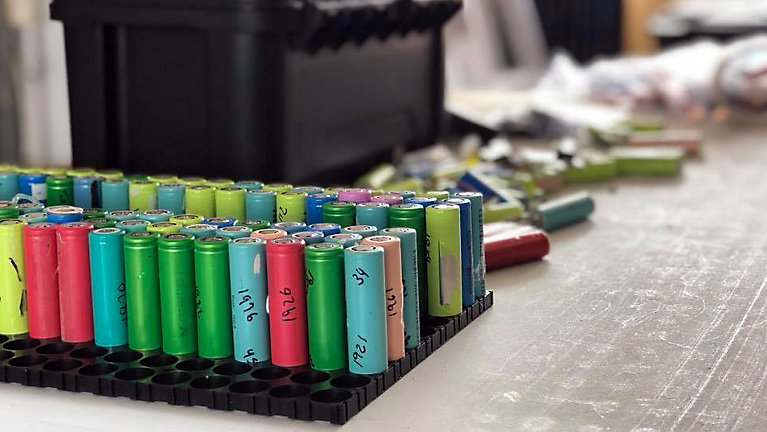 “How can I build batteries to help people in Puerto Rico by getting something that’s not going to cost me a fortune?” said Javier Camacho, a software engineer who has been unemployed for months.

He turned his garage into a workshop where he spends hours a day.

“It takes me a full day to just make a one kilowatt hour battery,” Camacho explained.

He recalled shopping for a generator with his wife before hurricanes hit Puerto Rico in Sept. 2017.

“I said to her, ‘I think I’m not going to get this,’ and my wife looks at me, ‘why?’ And I said, ‘because there’s not going to be gasoline in Puerto Rico,”’ he remembered.

Camacho thought there had to be a better way to generate power.

“I started watching videos, and that’s how I got into this,” he said laughing.

“They get discarded like it was trash,” Camacho said.

One man’s trash is another man’s treasure. Camacho builds blocks with all the batteries after testing them for days.

It’s a complex process getting them to Puerto Rico, as you cannot ship them through air — they must come by ship.

The batteries can be explosive. Camacho has received most batteries through donations.

“My first donation was 300 pounds of batteries,” he said.

Once he builds the block of batteries, he places them in a black tool box that is connected to an inverter and a solar panel to generate power.

Depending on the power of the battery block, you can run different appliances such as fridge, TV and even fans.

Camacho has spent hours learning from YouTube videos and perfecting his building skills, loving every second.

“Putting things together is normal for me,” Camacho said.

Helping others has become this young man’s full-time job, hitting the road every day to bring light into another Puerto Rican home in need.

Camacho has installed almost 50 solar powered generators, most of them in homes on the southeast region of the island where thousands of families are without power.