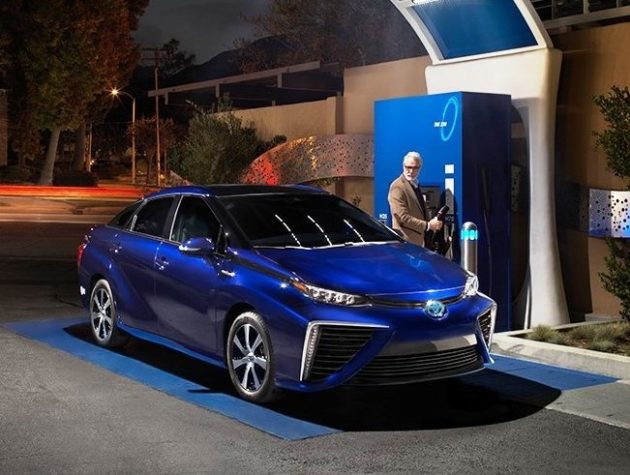 Grid battery storage projects like Tesla’s 100-megawatt installation in Australia may be getting lots of press, but behind the scenes, hydrogen fuel-cell systems are carving out a niche in applications ranging from non-polluting motor vehicles to power-gobbling data centers.

“It’s not either-or,” said Sunita Satyapal, director of the U.S. Department of Energy’s Fuel Cell Technology Office. “We definitely need battery electric vehicles, we need advanced combustion, biofuels — really, all of the above. But what’s unique about hydrogen is its versatility.”

Satyapal and some prominent users of fuel-cell systems, including executives from Microsoft and Toyota, discussed the state of the art in Seattle today during the CleanTech Innovation Showcase, presented by CleanTech Alliance.

Fuel cells generate energy through a straightforward chemical reaction: Stored hydrogen is combined with oxygen from the air with the aid of a catalyst, producing electricity. The devices are about twice as efficient as internal combustion engines when it comes to converting chemical energy into power, and the only emissions they produce are air and water vapor.

“For us, it’s all about the emissions,” said Ron Kent, advanced technologies manager for the Southern California Gas Company.

Today, most hydrogen fuel is produced from natural gas, but energy companies are also fine-tuning techniques that use electricity from renewable sources such as solar and wind to split water into hydrogen and oxygen through electrolysis. The hydrogen provides a portable way to store the energy for later use.

Kent’s company is partnering with the University of California at Irvine and the Energy Department’s National Renewable Energy Laboratory on demonstration projects that combine hydrogen and carbon dioxide to produce methane fuel.

“It allows use to grab CO2 and do something with it,” Kent said. “We’re using microbes to do it.”

Microsoft aims to use fuel cells, as well as grid batteries, to make sure its data centers can cope with spikes in power usage when the internet glows hot.

“Our vision is that fuel cells are primary power, not backup,” Sean James, director of energy research at Microsoft, told GeekWire. Microsoft has been experimenting with fuel-cell-powered data centers that run on biogas or natural gas, with the eventual aim of using hydrogen made with solar or wind power.

One big drawback is the capital cost. “Fuel cells are already pretty efficient, but they’re also pretty expensive,” James said. He advised energy researchers to focus on making the devices cheaper rather than increasing their efficiency.

Fuel cells are slowly gaining ground in the automotive sector as well. For several years, California-based Total Transportation Services has been running a fleet of freight trucks powered by hydrogen fuel cells, alongside trucks powered by batteries and natural gas.

Setting up mobile hydrogen fuelers is one of the keys to success, said Victor La Rosa, the company’s CEO.

“It gives us a lot of versatility, and the ability to open up using hydrogen anywhere,” he said. “But more than anything, it increases our range. That’s really the most significant thing, especially over the battery technology.”

Total Transportation’s hydrogen-powered trucks have a range of about 250 miles, compared with 100 miles on average for battery-driven trucks, La Rosa said. Moreover, hydrogen refueling goes much faster than battery recharging, he said.

The availability of hydrogen refueling stations, or lack thereof, is a limiting factor. Right now, California and Hawaii are the only states that have them. But Dave Bora, senior manager for advanced technologies research at Toyota Motors North America, is hoping that’ll change sooner rather than later.

Toyota already makes a hydrogen-powered passenger sedan known as the Mirai (which is the Japanese word for “the future”). Toyota says the car will become available this year in Canada, starting with Quebec.

Just this month, a hydrogen fueling station opened in Vancouver, B.C. — the first of what’s expected to be eight such stations to make their debut in British Columbia over the next two years. The stations are meant to service Hyundai’s hydrogen-powered Tucson model as well as the Mirai and the Honda Clarity.

“Now we have California and Canada, and we’re starting to look at Oregon and Washington, in between … to kinda get the West Coast going,” Bora said.