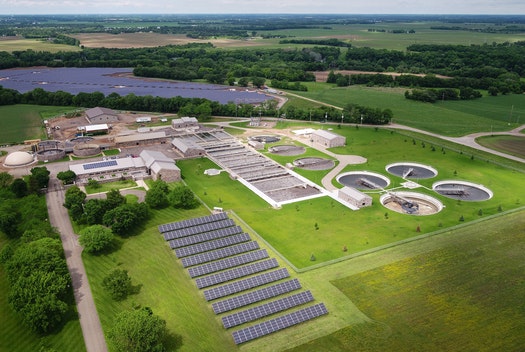 The sewage plant in this city does something even a non-engineer might find remarkable: It makes so much of its own energy that on some days, when the sun shines bright, the plant’s managers don’t need to buy electricity.

Instead, they sell it.

That’s despite the fact that such plants are notorious energy hogs, burning up the equivalent of a small neighborhood’s monthly electrical use every single day to move and clean city water.

In St. Cloud, though, a pair of powerful solar arrays and a state-of-the-art biodigester that turns sewage into electricity, heat and fertilizer sometimes generate more power than the plant can use. That happened for the first time on April 12 of last year. Since then, it’s happened on 30 additional days, most recently on June 5.

Those “net zero” days in St. Cloud are among a wave of positive anecdotes from municipalities across the state about early efforts to adopt renewable energy. Driven by favorable economics and, to a lesser extent, constituent proddings, many cities have turned to solar and other renewables so quickly that even the people pushing for the change say they’re surprised.

“It comes down to how can you say ‘no’ to saving money and doing something for the environment,” said Abby Finis, senior energy planner with the Great Plains Institute of Minneapolis.

That momentum was driven by the state’s 2007 renewable energy standard and solar energy laws passed in 2013 that require public utilities to generate 1.5 percent of electricity from solar by 2021, said Matt Privratsky of Fresh Energy, a Minnesota nonprofit that advocates for renewables.

Solar has grown so quickly in Minnesota, in fact, that between 2016 and 2017 the amount of solar power produced didn’t just double or triple, but grew by a factor of 72, according to the Minnesota Department of Commerce. That was enough to raise solar power from .03 percent of all electricity generated in the state in 2016 to 1.2 percent a year later.

The surge has prompted several Minnesota city governments, including Minneapolis, to set bold goals to go 100 percent renewable by a set date.

Of the municipalities racing to get there, St. Cloud may be the leader. Its subscriptions to solar gardens and use of geothermal and conservation measures have it claiming an 83 percent renewable rate for the city government. (This does not include private homes or businesses.)

“Our goal was to be aggressive because we knew what the potential was, particularly in the area of solar,” said St. Cloud Mayor Dave Kleis.

As recently as 2014, the city government used just 5 percent renewables for its electrical demand, but that was also the year that the St. Cloud utilities department laid plans to dramatically improve the sewage plant’s efficiency. Those plans soon spread across other city departments, and with Xcel Energy’s help, St. Cloud began a comprehensive review of energy use.

The city has since subscribed to 32 solar gardens — at least 20 commissioned last year alone — for a total of 23 million kilowatt-hours of solar energy, or enough to meet about three-quarters of demand.

Solar panels were also installed on the roof of the police headquarters, a fire station, a senior center and three other city buildings. A conversion to LED helped cut in half electrical use for streetlights between 2015 and 2017. Efficiencies at the sewage plant lowered its power demands as the new biodigester and solar panels came online. The public transportation system, meanwhile, converted nearly two-thirds of its bus fleet to compressed natural gas. That lowers carbon emissions and has saved St. Cloud Metro Bus about $450,000 in fuel costs over the past three years.

The savings from the solar garden subscriptions alone amount to $28 million over 25 years, according to a city analysis. The sewage plant spends about $400,000 a year less for electricity, money that for 14 years will go to pay a bond issued for the solar panels and biodigester. After that, the city can keep the savings.

And none of these calculations include the city’s long-running hydroelectric plant, which generates nearly twice as much electricity as the city needs every day. All of that power goes to Xcel Energy for use on the grid, so the city hasn’t considered it in their renewables calculations.

Few cities in Minnesota can match St. Cloud, but Minneapolis might come closest, where measures already underway will push the city government’s use of renewables to about 65 percent by the end of this year.

St. Paul stands at about 25 percent renewable and has subscribed to solar gardens that, once built and put online, will raise the city’s number closer to 50 percent. Among other large cities: Mankato will hit 52 percent by next year, Rochester is at about 17 percent and Duluth about 14.

“It’s not just the right thing to do, it actually makes a lot of sense financially to do it,” said Alison Zelms, Mankato’s deputy city manager. Her city will save $273,000 a year starting in 2019 thanks to subscriptions to solar gardens, a pair of city-owned solar arrays and a suite of conservation measures that include installing LED lights.

Smaller cities have switched to renewables, too. In Red Wing, the city government approved solar garden subscriptions in 2016 that would cover 100 percent of municipal demand. So far, about 40 percent of the gardens have been built, enough for the city to save about $33,000 on its power bill last year. Once all the gardens are online, the city expects to save $6.6 million over 25 years.

Meanwhile, a five-megawatt solar garden that went online in February 2017 helps power the Red Wing School District, which expects to save $7.7 million over 25 years.

In Inver Grove Heights, City Administrator Joe Lynch said his city both subscribed to solar gardens and installed rooftop solar on city buildings, eventually finding that the latter didn’t deliver the predicted savings while the solar gardens did. He said conversations are now underway about how to raise their renewable electricity rate of about 48 percent, perhaps by saying ‘yes’ to one of the solar vendors who call him pitching more solar gardens.

In Woodbury, the city’s subscriptions to solar gardens are expected to deliver about $67,000 a year in savings, or about $1.69 million over the life of a 25-year contract. The city recently signed up for more solar gardens and expects to have about 70 percent of its electrical demand matched by its subscriptions.

“Everybody has been really happy with the way that this is going,” said Jen McLoughlin, the city’s sustainability specialist. “We are seeing the savings.”

The city installed its own solar panels on the public safety building, but analysis continues on whether that’s a better move than joining more solar gardens, said McLoughlin.

For cities making the plunge into renewables, the economics have often been at the center of the argument. Plummeting costs for wind and solar energy make it about the cheapest way to keep the lights on at City Hall. Some of the solar farms and wind stations also generate lease payments and property taxes that, in places like Jackson County, in the wind-rich region of southwest Minnesota, contribute a substantial amount to local government’s bottom line.

But on top of the talk of dollars and cents are creative campaigns by environmentalists who want to push their cities to move faster.

One of the most successful projects has been led by kids like Olya Wright, 12. Last year, Wright, along with other members of a nature group she started, delivered bad news to her City Council in Grand Marais. Using a questionnaire and directions she took from the youth environmental group iMatter, based in St. Louis Park, Wright told the City Council that she had assessed its environmental efforts and determined that they were nearly failing.

“They got a grade,” Wright said recently from her home in Grand Marais. “It was a D-plus.”

The council passed a climate resolution that night, vowing to shrink the city’s carbon footprint.