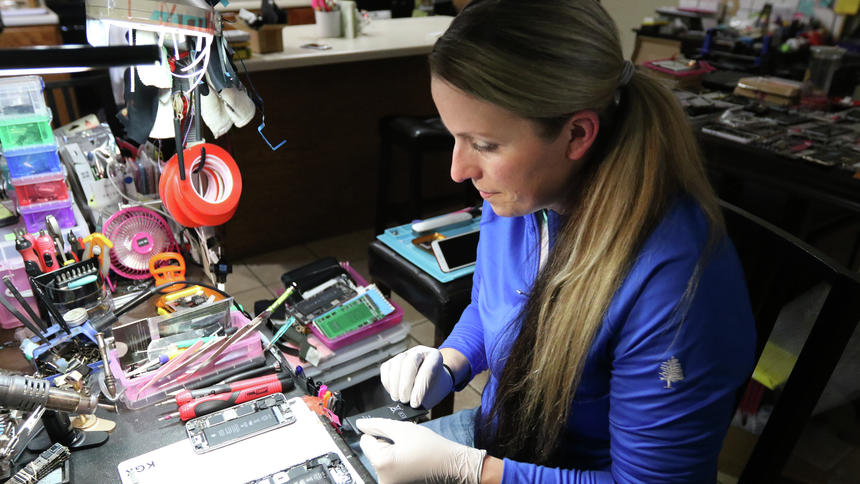 Pretty much everything we do these days, we do with a smartphone in our hand.

Whether checking the weather, our social media feed or ordering dinner online, everyone wants to make sure their smartphone is charged and that the battery doesn’t lose its juice.

The question always have—and others do, too—is how long should the battery life last before my device dies? And, how can you make it last longer so you’re not always trying to find a charging station?

You ware told once not to charge your phone until it is almost dead, as a battery only has so many life cycles before it will no longer work. It turns out this is a myth.

Amanda Felske of iDoc Phone Repair of Brainerd said batteries used in smartphones are made of lithium and have no memory, so charging them when the battery is low is irrelevant. Felske said a person can charge their phones at any time and it will not make the battery life go bad sooner. However, Felske recommends people not charge their phone overnight, as having it plugged in for the entire night is bad on a fully charged battery.

Felske has had her business in repairing smartphones and other electronics for almost seven years. She said 30 percent of her business deals with battery issues. Other common issues are cracked screens, broken charging ports and water damage.

Felske recommends people to not buy an off-brand battery or phone charger. She said if people have an Apple phone they should buy an Apple battery or charger.

“If you get a knock-off, it will wreck your phone,” she said. “There are a lot of unreputable vendors out there. … I stay in business because people get bad parts for their device or they damage it.”

So how do you know when you need a battery? Felske said a lot depends on the person, how often they use their device and what they use it for. She said software updates take a toll of battery life, when it comes to older phones. Samsung batteries last longer than Apple batteries. A Samsung battery lasts around two to three years.

“Apple recommends people to not shut down their apps, unless you’re not going to use it within the week,” Felske said. “If you use an app frequently they recommend keeping it open. Every time you close it, it completely shuts it down, but when you go to reopen it, especially if you are reopening every single day, it takes so much power to power it back up, just like when you are closing your computer down.

“Streaming takes a lot of battery power. If you stream all the time you will put yourself over the average and would need a battery sooner,” Felske said.

Temperatures also can impact battery life, when it is extremely cold or hot. The recommended temperature for a device is between 62-95 degrees; ideal temperatures is 62-72, as 95 degrees or higher or 32 degrees or lower may damage the battery, Felske said.

Felske said many times people may think their phone is damaged and they need a new one, the reality is they just need a new battery. When batteries are deteriorating they begin to expand like a balloon being aired up. As the battery is expanding, it starts to creep out of the phone, expanding the phone, maybe even cracking the phone.

“You don’t want your device to explode,” Felske said.

How do you know if a battery is the reason why you are having problems with your smartphone? Felske said signs may include your phone randomly shutting down, battery charging too fast, phone getting too hot and if the screen appears to be popping off it could be the battery expanding.

What can you do to see if you have a battery issue? Do a factory backup—to update and restore your phone.

“A lot of people think they are having battery issues but it could be just an app and needs to be reset,” Felske said. “If a reset is done and you are still experiencing issues, they you need a new battery. ”

Drop your phone in the lake?

People think placing a water-damaged phone in a bag of rice will help to fix it.

“This is a huge myth,” Felske said. “Rice is for cooking not electronics. This is an old wives’ tale. Rice causes 100 times more damage than good.”

Felske recommends people to do the following if they dropped their phone in the lake or other waters:

• Take the battery out.

• Bring it in right away to a repair shop.

“If people abide by Amanda’s rules, a high percentage of your phone will be fine with minimal repairs,” Felske said.