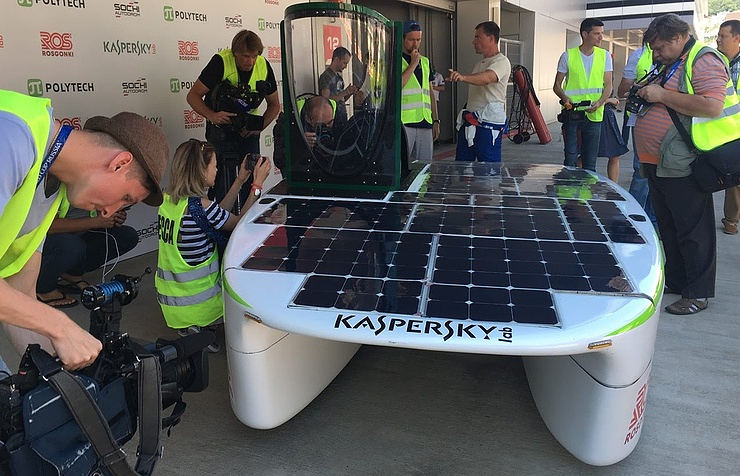 Russia’s first solar vehicle SOL unveiled at the Formula-1 racing track in the Olympic Park of Sochi has successfully passed a drive test, TASS reports from the scene.

The solar vehicle’s creation is an important part of the program of developing new kinds of auto transport, including sports vehicles. The technologies employed in designing the solar vehicle can be used in competitions and in the process of creating transport of the future for urban roads and for personal use.

The Polytech Solar Team from the St. Petersburg-based Peter the Great Polytechnic University has been working on the project of the solar vehicle since the spring of 2016. In 2017, the solar vehicle’s concept was supported by Russia’s Industry and Trade Ministry. The Kaspersky Lab is the project’s main sponsor.

“This concept car is our first experience of developing the solar vehicle jointly with students and post-graduate students of the Polytechnic University. We are gaining experience by trials and errors in the process of our work on it and we are looking confidently into the future so that we can make a new car with improved characteristics next time,” Polytech Solar Team Head Yevgeny Zakhlebayev told journalists.

“Now we have successfully tested it at the Sochi Autodrome and the next step will involve its participation in the American Solar Challenge competitions that will be held in the United States [July 14-22],” he noted.

As the Kaspersky Lab said in its press release, the company will protect the solar vehicle from cyber-threats.

“We are very proud that we are taking part in this project, which features innovative technologies, the engineering thought and technical development,” representative of the project’s sponsor Mikhail Savushkin said.

Racer David Markozov from the SMP Racing program of the Russian auto sport development made two test circles in the solar car on the Sochi Autodrome racing track. The car successfully passed the tests, developing a speed of 85-90 km/h. According to Zakhlebayev, the price of the vehicle prototype is still a commercial secret while the project’s budget stipulates funds both for developing the solar vehicle and making trips to racing competitions.

“The final goal is to secure presence in these races and the second task is to try to further push the vehicle into the commercial track,” Zakhlebayev said.

“From the outset, the car was designed for participation in competitions and its shape is called the catamaran,” he added.

The first Russian solar vehicle derives its name from a Mars solar day. The car can be charged both from an ordinary socket and with the help of solar panels. The car needs to stay 6-7 hours in the sun to be fully charged. Solar panels cost no less than one million rubles ($15,700) and enable the car to get power from solar energy in the process of riding.