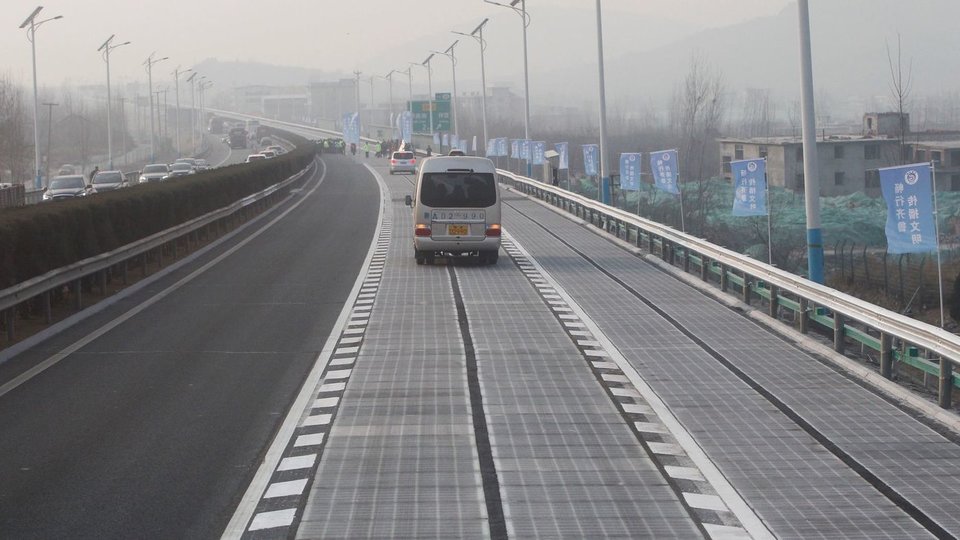 In 2017, the country poured $126.6 billion into the solar industry — a 30% increase from the year prior — in an effort to reduce urban pollution, a problem behind health epidemics in many Chinese cities.

Most of China’s solar megaprojects manifest as massive farms on the water or in open fields, where the country uses hundreds of acres of land to build onshore solar farms.

A Chinese company called Pavenergy aims to create similarly ambitious solar projects on the country’s freeways, where existing infrastructure can be repurposed.

Pavenergy’s plastic-covered solar panels blanket a two-thirds-mile portion of a highway in Jinan, the capital city of eastern China’s Shandong Province. The panel-covered highway is designed to withstand the pressure from the 45,000 cars and trucks that drive on it each day.

Solar roads are more feasible today than ever before. Thanks in large part to an increase in Chinese solar production, a solar panel today costs a tenth of what it did a decade ago.

But the US faces a unique infrastructure-related challenge with solar roads that China doesn’t have to contend with. Most American roads include a lot of asphalt, which compresses slightly under the weight of heavy vehicles. On a concrete road, the nearly paper-thin solar cells can withstand a truck’s load of weight. But on asphalt, the cells easily snap when bent.

This is not as much of an issue in China, where most highways are built with a more sturdy concrete foundation, according to The Times.

In the US, solar road projects have struggled to get off the ground. A company called Solar Roadways made headlines in 2016 when it installed the country’s first public (and very small) test of a solar road. The project received several research grants from the US Department of Transportation, and raised an additional $2.2 million in a crowdfunding campaign.

The trial took place in a pedestrian square in Sandpoint, Idaho, that is devoid of car traffic. Because of the project’s small scale, it generates only enough electricity to power a nearby fountain and restroom, according to the Spokane, Washington-based news station KREM 2.

Kansas City, Missouri, started planning a more ambitious solar road project with Solar Roadways in 2016, and the state launched a campaign to crowdfund its installation along Route 66. But in late 2017, the Missouri Department of Transportation put the project on hold.

China is facing its own roadblocks with making solar highways mainstream. Since the panels lie flat and don’t tilt toward the sun’s rays, they produce only half as much solar power as rooftop installations on average. Solar roads are also more expensive than traditional asphalt. Each decade, it costs about $11 a square foot to repair an asphalt road. It’s more than four times as expensive to replace a road’s solar panels.

If solar road companies can get costs down, their products pose several advantages for cities.

There’s no added construction cost for land, because the roads already exist. Since roads run around and through cities, little power would be lost transmitting the electricity. And as BI’s Dana Varinsky has noted, solar roads could making driving safer. Electric heating strips could melt snowy roads, and the embedded lights could alert drivers to construction, traffic hazards, and exits.

Bob Brendel, the special-assignments coordinator with the Missouri Department of Transportation, recently said the state was not opposed to exploring solar highway projects in the future. But his team may choose to work with a foreign company next time.

The future for solar highways appears to be more optimistic abroad. On the solar road in China, Qilu and Pavenergy have said they will soon embed sensors that could interact with and charge autonomous electric vehicles. And this month, Tokyo’s government announced plans to trial solar road technology as early as 2019.