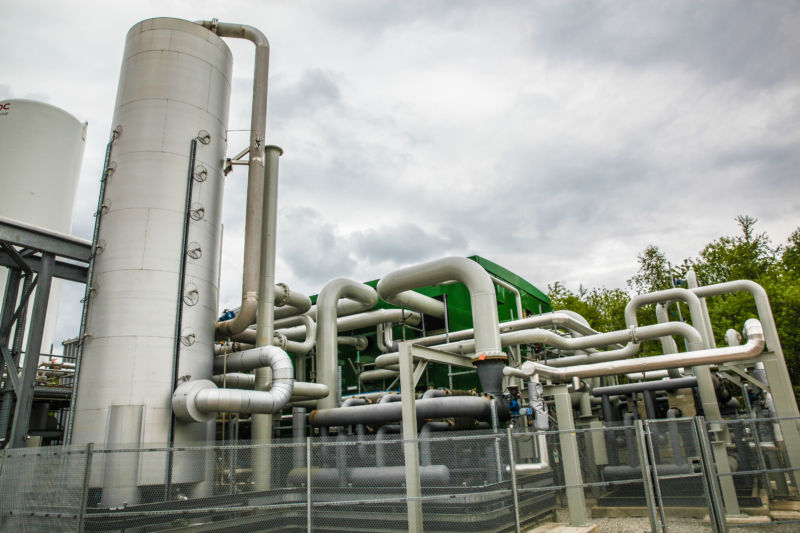 A first-of-its-kind energy-storage system has been added to the grid in the UK. The 5MW/15MWh system stores energy in an unusual way: it uses excess electricity to cool ambient air down to -196°C (-320°F), where the gases in the air become liquid. That liquid is stored in an insulated, low-pressure container.

When there’s a need for more electricity on the grid, the liquid is pumped back to high pressure where it becomes gaseous again and warmed up via a heat exchanger. The hot gas can then be used to drive a turbine and produce electricity.

The system is called Liquid Air Energy Storage (LAES, for short), and if you’re thinking it sounds remarkably like Compressed Air Energy Storage (CAES), you’re right. LAES takes filtered ambient air and stores it so it can be used to create electricity later, just like CAES. But LAES liquifies the air rather than compressing it, which creates an advantage in storage. Compressed-air storage usually requires a massive underground cavern, but LAES just needs some low-pressure storage tanks, so it’s more adaptable to areas that don’t have the right geology.

LAES has also been compared to pumped hydro, where excess electricity is used to pump water up to a reservoir above a hydroelectric turbine. Pumped hydro and LAES both can be designed to provide power for hundreds of thousands of homes. But unlike pumped hydro, LAES doesn’t require a water system or elevation differences to operate.

OK, what about this particular plant?

This new LAES system is being built by a company called Highview Power in Bury, near Manchester, UK, and it’s connected to the Pilsworth Landfill gas site, a power plant that burns methane from the landfill to create electricity. The plant was built in partnership with Viridor, a recycling and renewable energy company, and IT received £8 million from the UK government (about US$10.7 million).

This demonstration liquid-air storage system was preceded by a 350kW/2.5MWh pilot system at an 80MW biomass plant west of London between 2011 and 2014. The Bury demonstration plant is, in fact, significantly behind schedule—it was commissioned in 2015 and was expected to be up and running shortly thereafter.

The power stored at Pilsworth will be aggregated by a company called KiWi Power, which will manage when the LAES system will charge and discharge. A press release noted that this 15MWh system will be able “to power about 5,000 average-sized homes for around three hours.” Generally, storage systems have found a niche on the power grid by providing short-term and ancillary services, but long-duration options will be needed as more and more intermittent renewables are added to the grid.
The same press release makes the case for LAES as perhaps even more environmentally friendly than batteries. “No exotic metals or harmful chemicals are involved, and the process does not release any carbon emissions,” Richard Pennells, managing director of energy at Viridor, stated. “The plant comprises mostly of steel, which has a lifespan of between 30 to 40 years, in comparison with 10 years for batteries. At the end of life, a LAES plant can be decommissioned and the steel recycled.”

Highview Power’s Pilsworth plant is designed to capitalize on opportunities for heat efficiency, too. It uses heat from the gas plant it’s connected to in the re-heating process, and the company has also reportedly developed a proprietary system to store the “waste cold” that is created when air is discharged (PDF). The cold is used to increase the efficiency of the process that converts air into liquid.

Highview says capturing “waste cold” can also occur during the regasification of Liquified Natural Gas (LNG). LNG has to be stored at very cold temperatures, and if that cold can be harvested and used to make a Liquid Air Energy Storage system more efficient, that would make the battery more competitive.

The company has also explicitly said that it will test its system at Pilsworth for use in US regional markets.

Since this is the first such commercial LAES system, there’s obviously a lot to be learned, and there’s no reason to think this technology will conquer the utility-scale battery storage market any time soon. But it is a cool new option to have in a renewable-focused future.