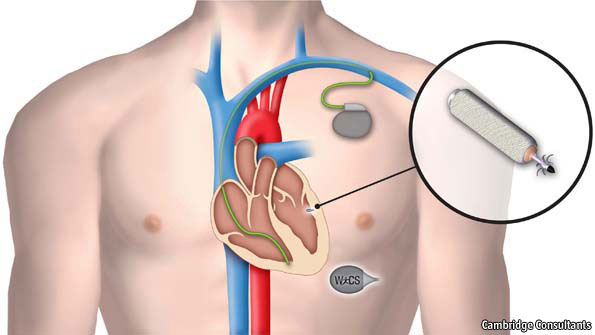 In “I Sing the Body Electric,” poet Walt Whitman waxed lyrically about the “action and power” of “beautiful, curious, breathing, laughing flesh.” More than 150 years later, MIT materials scientist and engineer Canan Dagdeviren and colleagues are giving new meaning to Whitman’s poem with a device that can generate electricity from the way it distorts in response to the beating of the heart.

Despite tremendous technological advances, a key drawback of most wearable and implantable devices is their batteries, whose limited capacities restrict their long-term use. The last thing you want to do when a pacemaker runs out of power is to open up a patient just for battery replacement.

The solution may rest inside the human body — rich in energy in its chemical, thermal and mechanical forms.

The bellows-like motions that a person makes while breathing, for example, can generate 0.83 watts of power; the heat from a body, up to 4.8 watts; and the motions of the arms, up to 60 watts. That’s not nothing when you consider that a pacemaker needs just 50 millionths of a watt to last for seven years, a hearing aid needs a thousandth of a watt for five days, a smartphone requires one watt for five hours.

Increasingly, Dagdeviren and others are investigating a plethora of ways that devices could make use of these inner energy resources and are testing such wearable or implantable devices in animal models and people.

One energy-harvesting strategy involves converting energy from vibrations, pressure and other mechanical stresses into electrical energy. This approach, producing what is known as piezoelectricity, is often used in loudspeakers and microphones.

To take advantage of piezoelectricity, Dagdeviren and colleagues have developed flat devices that can be stuck onto organs and muscles such as the heart, lungs and diaphragm. Their mechanical properties are similar to whatever they are laminated onto, so they don’t hinder those tissues when they move.

So far, such devices have been tested in cows, sheep and pigs, animals with hearts roughly the same size as those of people. “When these devices mechanically distort, they create positive and negative charges, voltage and current — and you can collect this energy to recharge batteries,” Dagdeviren explains. “You can use them to run biomedical devices like cardiac pacemakers instead of changing them every six or seven years when their batteries are depleted.”

Scientists are also developing wearable piezoelectric energy harvesters that can be worn on joints such as the knee or elbow, or in shoes, trousers or underwear. People could generate electricity for electronics whenever they walk or bend their arms.

A different energy-harvesting approach uses thermoelectric materials to convert body heat to electricity. “Your heart beats more than 40 million times a year,” Dagdeviren notes. All that energy is dissipated as heat in the body — it’s a rich potential source to capture for other uses.

Thermoelectric generators face key challenges. They rely on temperature differences, but people usually keep a fairly constant temperature throughout their bodies, so any temperature differences found within are generally not dramatic enough to generate large amounts of electricity. But this is not a problem if the devices are exposed to relatively cool air in addition to the body’s continuous warmth.

Scientists are exploring thermo­electric devices for wearable purposes, such as powering wristwatches. In principle, the heat from a human body can generate enough electricity to power wireless health monitors, cochlear implants and deep-brain stimulators to treat disorders such as Parkinson’s disease.

Scientists have also sought to use the same effect behind everyday static electricity to power devices. When two different materials repeatedly collide with, or rub against, one another, the surface of one material can steal electrons from the other, accumulating a charge, a phenomenon known as triboelectricity. Nearly all materials, both natural and synthetic, are capable of creating triboelectricity, giving researchers a wide range of choices for designing gadgets.

“The more I work with triboelectricity, the more exciting it gets, and the more applications it might have,” says nanotechnologist Zhong Lin Wang of Georgia Tech. “I can see myself devoting the next 20 years to it.”

The surfaces selected for use in triboelectric devices can make a great difference in how much electricity they produce, so scientists are experimenting with a variety of forms and textures. They have fabricated grids of cubes resembling microscopic city blocks, fields of nanowires resembling bamboo forests, and arrays of pyramids resembling those found in Giza. These materials not only “look beautiful,” Wang says, but covering a surface with pyramids also can boost the electricity generated by a factor of five compared with a flat sheet.

Pacemakers, heart monitors and other implantable devices triboelectrically powered by breathing and heartbeats have been tested in rats, rabbits and pigs. “We’re also seeing if triboelectricity can be used inside the body to stimulate cell growth and enhance healing of wounds,” Wang says, or to stimulate nerves.

Wang and colleagues have also designed triboelectrically powered wearable devices. They have fabricated triboelectric cloth that can recharge a flexible belt containing lithium-ion batteries. That can power a wearable heartbeat meter that wirelessly sends data to a smartphone. “The mechanical energy of daily human motions can get converted into electricity by our cloth,” Wang says.

Another strategy relies on devices — known as biofuel cells — that generate electricity via chemical reactions between enzymes and fuel molecules in, or released from, the body, such as glucose in blood, or lactate in sweat.

For example, the enzyme cellobiose dehydrogenase from the fungus Phanerochaete sordida can break down sugars and generate electrical current when stuck onto carbon tubes only nanometers (billionths of a meter) wide. And scientists in France have created a biofuel cell based on enzyme-coated carbon nanotubes that is about half a teaspoon in volume. When implanted in rats, it can generate enough electricity from blood sugar to power an LED or a digital thermometer.

Experiments have also shown that biofuel cells woven into garments such as headbands and wristbands can generate enough electricity from chemical reactions with sweat lactate to power a watch.

None of these devices is on the market yet, Dagdeviren says, but she predicts they might start appearing within 10 years. She and her colleagues are even investigating dissolvable versions.

“Imagine,” she says, “having a device inserted into your body, and after it works for a while, it dissolves away down to the molecular level in your bodily fluids. And you don’t have to open your chest to take it out.”