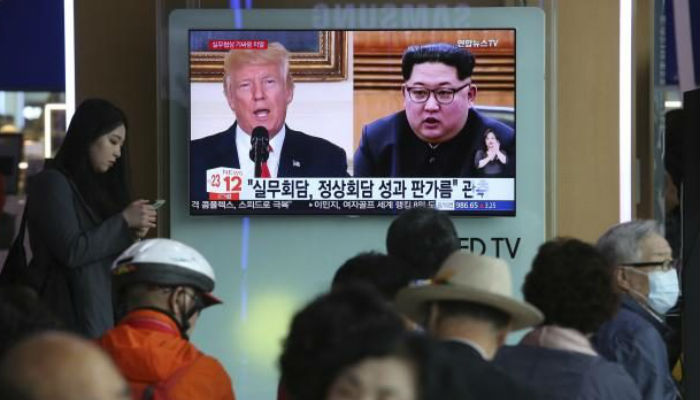 Seven decades of antagonism and mistrust will shadow Donald Trump and Kim Jong Un as they sit down for their unprecedented summit in Singapore — historical baggage that will weigh heavily on discussions over North Korea´s nuclear arsenal and how far Pyongyang is willing to go to meet US demands that it be permanently dismantled.

Washington is insisting the North give up its weapons in a complete, verifiable and irreversible way, while Pyongyang has balked at the idea of unilateral disarmament, saying it needs its nuclear and missile programmes as long as the United States and South Korea pose a security threat.

The search for a viable way forward that satisfies both sides will involve bridging a number of wide and potentially perilous gaps.

What weapons does North Korea have?

Monitoring groups estimated the yield from the North´s sixth and last atomic test in September to be as high as 250 kilotons — 16 times more powerful than the US bomb that destroyed Hiroshima in 1945 and the kind of yield generated by a hydrogen bomb.

Seoul´s 2016 defence white paper, the most recent available, estimated the North had 50 kilos of plutonium — reportedly enough for about 10 bombs — and a “considerable” but unquantified ability to produce uranium weapons.

Last year, the Washington Post reported a US intelligence assessment that the North had up to 60 nuclear devices.

Where the North keeps its missiles is not publicly known, but it has extensive experience in tunnelling and it is believed they are stored at underground facilities scattered around the country.

They are also mobile — it has put transporters on show at military parades.

The North has yet to conclusively demonstrate that it has the capability to shrink a nuclear warhead to fit inside a missile, accurate targeting, or the re-entry technology needed for it to survive returning to the Earth´s atmosphere from space.

But it says it has mastered all three, and Kim has declared the development of the country´s “treasured sword” complete.

Aside from its nuclear arsenal, the North is also believed to have 2,500 to 5,000 tonnes of chemical weapons developed since the 1980s, according to the South´s military.

What does the US have?

US President Donald Trump says his nuclear button is bigger than Kim´s — and it works.

According to the State Department, as of September 1, the US has a total of 1,393 deployed nuclear warheads, deliverable by land- and submarine-based missiles and heavy bombers.

It has thousands more in stockpiles and awaiting dismantlement, campaign groups say, with the Arms Control Association putting the total at 6,550 last year.

The US withdrew tactical nuclear weapons from the South in the 1990s and Seoul does not have any itself.

But the US can reach targets anywhere with conventional or nuclear munitions.

It has long-range bombers, mid-air refuelling capabilities, and a fleet of nuclear submarines constantly at sea, each armed with phenomenal destructive power.

What has Pyongyang promised?

Secretary of State Mike Pompeo, the most senior US official to have met Kim Jong Un, said the North Korean leader had personally informed him that Pyongyang was ready to denuclearise.

And Trump has been unequivocal, saying: “They have to de-nuke. If they don´t de-nuclearise, that will not be acceptable.”

For its part, North Korea has repeatedly expressed a commitment to the denuclearisation of the Korean peninsula, but the phrase is a diplomatic euphemism open to interpretation on both sides and Pyongyang has given no public indication of what concessions it might be offering.

According to Seoul, it has offered to consider giving up its nuclear weapons in exchange for unspecified security guarantees.

When Kim visited key ally Beijing in March in only his first foreign trip as leader, China´s state media cited him as saying that the issue could be resolved if Seoul and Washington take “progressive and synchronous measures for the realisation of peace” — implying some form of quid pro quo.

What does that imply?

Pyongyang says it needs nuclear weapons to defend itself against the United States, and interprets threats against it widely — it has regularly condemned US-South Korean joint military exercises as preparations for invasion.

Under the 1953 Mutual Defence Treaty between South Korea and the US, Washington is duty-bound to come to its ally´s aid if attacked.

In the past Pyongyang has demanded the end of the alliance and the withdrawal of US troops from the South.

The US has 28,500 troops stationed in the country to defend it from its neighbour, and Washington´s nuclear arsenal is a key part of its defence capabilities — it does not have a “no first use” policy.